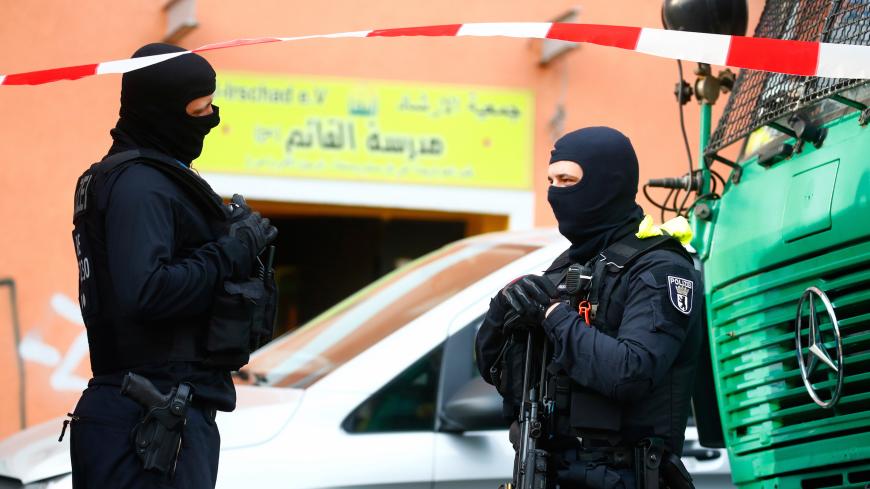 German special police talk near the El-Irschad (Al-Iraschad e.V.) centre in Berlin, Germany, April 30, 2020, after Germany has banned Iran-backed Hezbollah on its soil and designated it a terrorist organization. - REUTERS/Hannibal Hanschke

Germany labeled the Lebanese militant group Hezbollah a terrorist organization today in a move that Israel hopes will cause Europe to follow suit.

The top German diplomat said that Hezbollah’s violent activity and threats to Israel were the reasons behind the declaration.

“Hezbollah denies Israel's right to exist, threatens with violence and terror, and massively upgrades its rocket arsenal,” said Germany's Foreign Affairs Minister Heiko Maas in a statement. “It is important that Germany exhausts the means of the rule of law to take action against criminal and terrorist activities of Hezbollah,” he said.

The decision means that all Hezbollah activity is now banned in Germany and comes after years of pressure from the United States and Israel. German authorities raided mosques on Thursday believed to be connected to the group. Hezbollah symbols are henceforth banned at gatherings, in published materials and in the media, and its assets in Germany can be confiscated, according to The New York Times.

Israel rejoiced at the move and declared its desire for other European Union (EU) states to join Germany.

“This is a very important decision and a valuable and significant step in the global fight against terrorism,” said Israel’s Foreign Minister Israel Katz in a press release. “I call on additional European countries and the European Union to adopt this necessary policy,” Katz said.

Hezbollah maintains some support in Europe. There are up to 1,050 Hezbollah members in Germany, Reuters reported.

Hezbollah formed in 1985 to fight Israel in southern Lebanon during that country’s multifaceted civil war. It has received considerable political, financial and military support from Iran since its inception. Hezbollah and Israel fight on and off near the Israel-Lebanon border, and Israel frequently bombs Hezbollah targets in Syria. Hezbollah fights on the side of Syrian President Bashar al-Assad in the Syrian civil war, along with Iran.