Turkey and COVID-19: Is another Italy in the making?

Experts warn that Turkey may soon face a calamity similar to what befell Italy and Spain if the government fails to take stronger measures to fight the coronavirus. 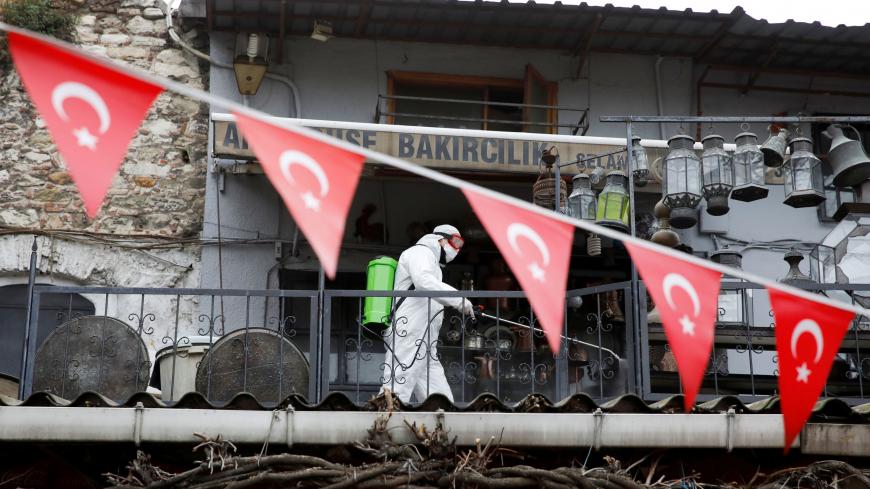 A worker in a protective suit sprays disinfectant at the Grand Bazaar to prevent the spread of coronavirus in Istanbul, March 25, 2020. - REUTERS/Umit Bektas

Turkey’s Health Minister Fahrettin Koca, in a televised speech to the nation March 23, conceded that the coronavirus is now all over the country, but refrained from naming the locations of confirmed cases. So much for the transparency he boasts of displaying.

Until two weeks ago, Turkey looked happy and confident in evading the pandemic. Some pseudo-scientists on TV shows even claimed that Turks were naturally immune to the virus because of their genetic makeup. It did not take long for the outbreak in Turkey to appear exponential. For some experts, the infection rate in the initial days of the outbreak is worse than what Italy experienced. They speak of scary scenarios where the worst is yet to come and that Turkey could be on the path of Italy. Turkey's measures, at one point praised as timely, are now looking inadequate or belated.

Turkish society is acutely polarized. Roughly half the population tends to distrust anything that officials, above all President Recep Tayyip Erdogan, do or say. The lack of transparency that led to the public distrust has become more crucial than ever in the coronavirus crisis.

The thread of the health minister’s tweets since last month clearly illustrates how Turkey has moved from self-delusion to a sense of an impending emergency.

On Feb. 16, Koca tweeted that Turkey was among the first countries to quickly take effective measures against the coronavirus and that everybody should be proud of their country. On Feb. 25, he took the occasion to honor Erdogan’s birthday. “Our country compensated for its lost years thanks to him. Turkey became a leading country in the world thanks to his leadership,” Koca wrote.

On March 5 and 10, Koca criticized Europe for negligence in responding to the outbreak and endangering people across the world. His tweets echoed Ankara’s criticism of the European Union over a crisis spawned by Erdogan’s decision to unleash refugees on Europe.

On March 12, a day after reporting Turkey’s first infection case, Koca tweeted a weird message, perhaps meant to be reassuring. He urged the nation to “hold out for two months,” asserting that COVID-19 had characteristics of a seasonal disease and that the virus would lose its impact with the advent of warm weather. This often happens with coronaviruses, but this particular one has still taken hold in parts of the world that were in summer, such as Australia (2,810 cases as of March 26).

On March 17, Koca confirmed Turkey’s first fatality. Less than a week later, he told millions glued to television screens that the virus had spread across the country. He refused to give breakdowns by regions and, while confirming the infection of health workers, he declined to reveal their number.

The minister’s press conference reinforced the belief of some that Turkey is pursuing the “herd immunity” policy that Britain espoused but abandoned quite quickly over the specter of catastrophic consequences.

Turkey’s inadequate response to the outbreak could be traced to Erdogan’s mindset. According to the Israeli Turkey expert Zvi Bar’el, Erdogan is under the impression that the coronavirus crisis will all blow over, promising that “if citizens comply with quarantine orders and maintain personal hygiene, 'the whole story will be over within three weeks.'”

Erdogan is notorious for delivering televised speeches at least once a day. However, since the COVID-19 outbreak in the country, he has hardly been seen around. It took him a week to appear on television to address the nation March 18 before he vanished again, leaving the health minister to face the public.

A week later, on March 25, Erdogan appeared on screens once again, claiming the coronavirus crisis might prove conducive for Turkey in commerce. He sounded more like a street-smart merchant than an astute statesman reassuring his people in the face of an unprecedentedly grave situation.

Erdogan was not his normal self and also conspicuously inconsistent. On the one hand, he advised the people to not go out, unless necessary, for three weeks and minimize social contact until the threat recedes, though he did not ask them to stay away from work. On the other hand, some of the economic measures he announced — such as support for the national carrier, Turkish Airlines, and suspension of the accommodation tax until November to support the key tourism sector, which accounts for around 12% of the economy — seemed to be almost encouraging people to travel and move around.

The measures were part of a 100 billion lira ($15.4 billion) package to support the economy and stem the impact of the pandemic, including other tax reductions and the postponement of debt payments.

The size of the package is insignificant, compared, for instance, with Germany's, which agreed to a 750 billion euro package ($815 billion) to alleviate the economic damage the coronavirus crisis could inflict. It is a clear manifestation of Turkey’s economic limitations as it cannot afford more than what Erdogan pledged. By the same token, it could be seen as a harbinger of a fresh crisis for the Turkish economy, which was already ailing since a big currency shock in 2018. Moreover, the Turkish war machine is at full steam in Syria, consuming huge resources and placing an unbearable burden on the crisis-ridden economy that has yet to be calculated.

Many experts, citing how quickly the number of cases and fatalities are growing, are warning that Turkey could soon become like Italy or worse.

A leading voice among them is Emrah Altindis, who teaches at Boston College and Harvard Medical School. In a recent interview with the online daily Duvar, he expressed concern over the increased rate of coronavirus cases, warning that Turkey is on the track of Italy and Iran. For Altindis, Turkey has lagged behind in terms of testing. Pointing to the successful control efforts of South Korea, which can conduct up to 20,000 tests a day, he stressed the total number of tests in Turkey stood at about 20,000 as of March 18. The numbers, however, have ramped up since, with Koca saying March 25 that 5,035 tests had been conducted in the previous 24 hours.

Altindis also warned that social distancing efforts will have little impact as long as millions of people continue to go to factories and other workplaces every day, even if the elderly stay home.

Haluk Cokugras, an expert on infectious diseases at Istanbul University’s medical faculty, also drew a gloomy picture in an interview with Haberturk TV on March 22. Given the rate of cases in the country, he said, Turkey might surpass Italy in two weeks' time. Cokugras said a countrywide curfew or a total lockdown is urgently needed. “The economy will collapse and we will have social troubles, but we have no other choice in order to stop the outbreak,” he said.

An even worse prediction is made by Onur Baser, a health economist at the University of Michigan who also teaches at MEF University in Istanbul. Speaking to Deutsche Welle's Turkish-language service March 23, he claimed at least 32 million people — more than a third of Turkey’s population — are expected to be infected with the coronavirus, meaning “150,000 to 600,000 deaths.”

Following the official confirmation of the first infection case March 11, the number rose to five March 13 and then to six the following day. The cases began to increase sharply thereafter, reaching 98 March 17, when the first fatality was confirmed.

About 370,000 people entered Turkey through the air between 27 Feb. and March 14, including 25,000 pilgrims returning from Saudi Arabia. Many of those people could well have been transmitters. In addition, Turkey's social-distancing measures may fall short because society is relatively unruly, very much polarized and lacking a strong sense of solidarity; this has caused concern that the cases and fatalities may soar in the coming weeks.

Unless the government takes drastic measures, including a complete lockdown, Turkey could be heading to the brink of a catastrophe. On March 23, Ankara was still preoccupied with political repression, firing and detaining mayors in eight more towns in the predominantly Kurdish southeast.

Last weekend, renowned Israeli scholar Yuval Harari wrote in the Financial Times, “In this time of crisis, we face two particularly important choices. The first is between totalitarian surveillance and citizen empowerment. The second is between nationalist isolation and global solidarity.”

In Turkey, Erdogan seems to have chosen the first options. This is the scariest part of Turkey’s trajectory in fighting the coronavirus.