Turkish Ambassador Serdar Kilic said Ankara is not receiving enough support from the international community as President Recep Tayyip Erdogan arrived in Brussels for meetings with the European Council and NATO. 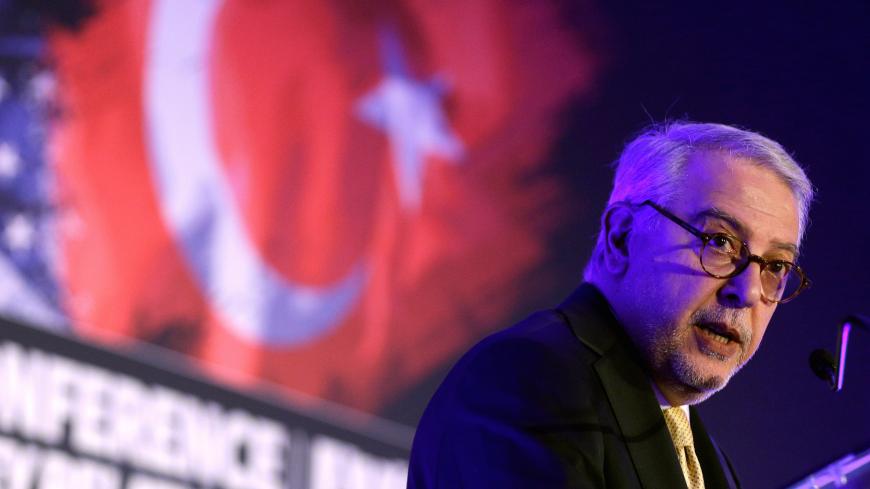 Turkish Ambassador to the United States Serdar Kilic speaks to the Conference on US-Turkey Relations in Washington, May 22, 2017. - REUTERS/Joshua Roberts

WASHINGTON — Turkey needs the international community to step up diplomatic, economic and material support as it hosts over 3 million Syrian refugees and after it lost 59 Turkish troops in Syrian regime attacks before a cease-fire deal was hammered out with Russia last week, Turkey’s envoy to the United States said today.

“Unfortunately, Turkey is the only force between the regime elements and the innocent civilians … and we have sacrificed 59 soldiers in order to defend the local population in that area,” Turkish Ambassador Serdar Kilic told journalists at the embassy in Washington today.

Kilic spoke as Turkish President Recep Tayyip Erdogan arrived in Brussels for meetings with the European Council president and NATO.

Some European officials have described Turkey’s recent decision to let refugees mass at the border and try to cross into Greece and the European Union as a barely disguised blackmail effort to get more money from the 27-member bloc.

But the Turkish envoy rejected the characterization, noting that Turkey is hosting more Syrian refugees than any country in the world — more than 3.5 million Syrians, as well as providing humanitarian assistance to millions of Syrians inside Syria in areas close to its border.

"We have spent $40 billion in order to take care of the requirements of those people, and the international community is losing sight of the fact that we are not only taking care of 4 million refugees in Turkey, including 3.7 million Syrians,” Kilic said. “We are also taking care of additional around 4 million to 5 million Syrians within Syria … as well.”

Kilic said the European Union has only delivered about half of 6 billion euros (nearly $6.9 billion) it pledged to help Turkey support its refugee population in a 2016 Turkey-EU migration deal.

“I mean, if someone is asking us to live up to our commitments, they should also look into the mirror and assume their responsibilities in that regard as well,” Kilic said.

“We have different opinions on different things,” Michel told journalists in Brussels. “And that is why it is important to have a frank and open dialogue in order as soon as possible to overcome the different problems.”

“For us it is important to implement the deal between Turkey and European Union on migration,” Michel said.

Kilic also said that if the latest Turkish-Russia cease-fire deal for Idlib, which went into effect March 6, breaks down, Erdogan has vowed to escalate against the Syrian regime.

“If there are attacks on the Turkish forces and the civilians, … President Erdgoan has stated very clearly that we are going to reciprocate, as we have done so far,” Kilic said. “And you have seen the casualties that we have inflicted on the … regime … and I'm sure that they have a clear idea as to what is going to happen if they do not abide by the cease-fire.”

Separately, the State Department announced today that US Syria envoy James Jeffrey would travel to Brussels on Tuesday to meet with NATO allies on the Idlib crisis and how to support Turkey’s security concerns. Jeffrey “will also hold meetings with senior EU officials to discuss and seek assistance for the dire humanitarian situation in Syria, particularly in Idlib,” the State Department said.