Tunisia’s new government faces the formidable task of reversing the economy's downward spiral of the post-revolutionary years with an eye toward becoming a gateway to Africa. 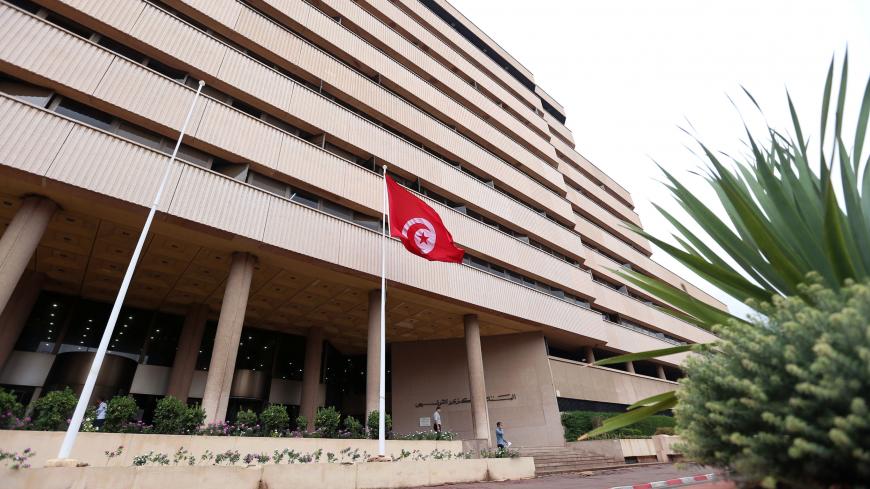 People walk out of the Central Bank in Tunis, Tunisia, Oct. 4, 2017. - REUTERS/Zoubeir Souissi

The main challenge for Tunisia’s new government, which was finally voted in on Feb. 26, is to rebuild Tunisia’s economy and unlock its untapped potential to be an economic gateway to Africa. But right now things are incredibly fragile.

Now that the newly appointed ministers are settled into their posts, the main task at hand is rescuing Tunisia from the perilous downward economic spiral of the post-revolutionary years. Although this quarter’s inflation and unemployment have fallen somewhat, they are not indicators of a spontaneous recovery.

Since 2016, growth has emerged in small segments such as tourism and the textile industries. But data published by the German data analytics website Census and Economic Information Center shows entrenched economic stagnation with Tunisia’s foreign borrowing having risen from 50% of the GDP in 2010 to 99.4% of GDP in 2018.

Outspoken economic consultant Ezzedine Saidane told Al-Monitor, “Things really don’t look brilliant; overall the growth rate in 2019 was less than 1%.” Saidane explained that Tunisia’s burden of debt has become unbearable. “1% is less than the real cost of borrowing,” he added, saying, “The question is whether this level of debt is sustainable, and if Tunisia is still in a position to pay back its debt normally and on time.”

William Lawrence, a former US diplomat working on North Africa and currently a lecturer in International Service at The American University, told Al-Monitor, “Tunisia has been on the post-revolutionary ‘J-curve.’ Countries go down after revolutions and Tunisia is still stuck at the bottom of the J.”

Lawrence said that part of the problem is the International Monetary Fund, which has loaned Tunisia $2.8 billion for economic recovery and disbursed the final $247 million tranche of the loan in June of last year. “The IMF is still imposing various forms of austerity [measures]. You cannot fix Tunisia by cutting government spending. Tunisia needs fiscal stimulation,” Lawrence explained.

Tunisia is at a political crossroads and needs to counter the decline in public faith in government. Tunisian polling company Sigma Conseil’s recent polls of Jan. 25 showed that 75.5% of Tunisians believe the country was on the wrong path. The poll also reported an upsurge in support for the right-wing populist Free Destourian Party led by Abir Moussi, an acolyte of deposed President Zine El Abbedine Ben Ali.

A March 4 paper by the International Crisis Group cautioned the Tunisian government of the urgent need to address the economy and rapidly improve public services if it is to regain public confidence and avoid a descent into populist extremism.

Saidane said that the government cannot test people’s patience any longer. “Tunisians are impatient. They’ve lost 40% of their purchasing power. They’re impatient because the economy has not created jobs.”

Tunisia desperately needs inward investment, but according to the Foreign Investment Promotion Agency’s figures published on March 7, foreign investment fell by a further 7.6% in 2019. Saidane stressed, “The government must start investing,” adding, “Only then will the private sector start investing and only then can you talk to foreign investors.”

According to Hichem Ben Fadhel, fintech entrepreneur and co-founder of the blockchain development company Tledger, Tunisia’s economy needs a bold new strategy as well as investment. Ben Fadhel told Al-Monitor, “Tunisia is blocked in the same pattern: The government is taking on debt to make reforms. Reform means that the government is trying to increase the efficiency of the existing system that is not working.”

Ben Fadhel says outdated bureaucratic processes such as “government authorizations” that control issues such as business incorporation or operating licenses are stopping business in its tracks and blocking any real development. He believes that Tunisia’s “19th century, colonial style” public administration system needs to be completely replaced. Ben Fadhel said that in the “new democracy, services should be built to serve the citizen, and should be made simpler and more efficient.”

Ben Fadhel believes that allowing Tunisians to make money more easily will also bring a natural end to the persistent problem of corruption. He said, “Corruption will reduce as a consequence of people making more money.”

Despite his criticisms, Ben Fadhel is an optimist for Tunisia’s future. “The digital economy will help open the market and make the dinar convertible, which, in turn, will help improve the public services. It is beginning very slowly, but if we are optimistic the pace will quicken.”

Ben Fadhel’s co-director, fintech developer Amin Ben Abderrahman, told Al-Monitor that he is quite certain that a change is finally coming and that previously problematic processes such as opening a bank account will soon become much easier. He said, “The Central Bank of Tunisia has been putting real effort into tackling the issue of financial inclusion.”

Ben Abderrahman explained that the Central Bank now understands the benefits of fintech and also the needs of business startups. “The governor of the Central Bank is finally giving licenses for fintech payment institutions. Two institutions will be licensed so they can offer the tools to create apps and empower people to build Tunisian-made solutions.”

Financial strategic intelligence consultant Mohamed Balghouthi told Al-Monitor that he believes that Tunisia needs to stop trying to repair old industries such as phosphate extraction. It should maximise Tunisia’s wealth of scientific and engineering research and dive headlong into the “fourth industrial revolution” that involves such tech advancements as nanotechnology, biotech and robotics.

Balghouthi is currently leading a team developing Tunisia’s first Economic Intelligence Agency, a digital portal that will give Tunisian and international investors easy access to market intelligence, information and guidance on regulations to make doing business in Tunisia easier. According to the website Trading Economics, Tunisia currently ranks 78 out of 190 countries in terms of ease of doing business. The project is endorsed by the Tunisian presidency and Balghouthi said he is determined to launch the project no later than September of this year.

Balghouthi believes that by focusing on developing emerging technologies, Tunisia will gain economic parity with its rich European neighbors within 20 to 40 years. “The objective is for Tunisia to enter the global value chain,” he said.

Balghouthi also talked about the need to integrate Tunisia’s “parallel economy” — which he claims accounts for some 48 billion Tunisian dinars ($17 billion) in lost revenue — into the mainstream. The Tunisian government has been making some efforts in this direction by developing a new type of “free zone” that integrates logistics and trade services with a consumer commercial park near Ben Guerdane, a town notorious for smuggling that lies close to the Libyan border.

The director of the Tunisian Office of Commerce, Ilyes Ben Ameur, showed Al-Monitor the progress made at the site since the project’s inauguration in March 7, which Al-Monitor attended. Ben Ameur told Al-Monitor that Tunisian, Libyan and European investors have shown interest. He said, “The logistics and services center will facilitate trade into Europe from both neighboring and other African countries.” He traced the lines on a map showing the position of Ben Guerdane and said, “The gateway to Africa.” He added, “The project relies on the private sector to invest and will take three years to complete.”