In Lebanon, the revolution will be televised 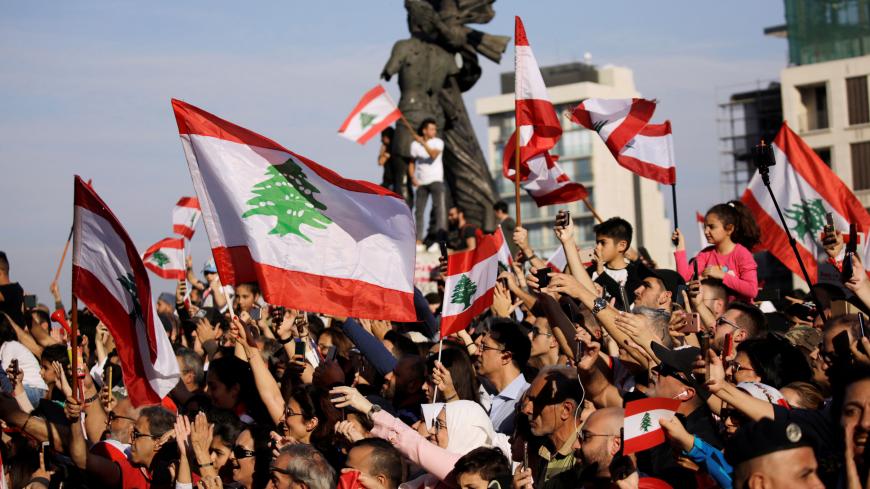 BEIRUT — Assolta4 TV, Fourth Estate — Lebanese Revolution TV, began testing on Feb. 17 as the first online channel dedicated to news on the popular movement that took root Oct. 17 to protest deteriorating living conditions, government ineptitude and political and economic corruption. The channel is expected to launch in about two months.

The online channel will feature interview and opinion programs on the movement's goals and demands along with news reports on living conditions and social and political issues. The programs will be posted to Facebook, YouTube and the channel's own website. Since the medium involved is an electronic platform, no license is required, but those behind the channel must notify the National Media Council of the channel's existence.

Matilda Farjallah, a journalist and television host, came up with the idea for the channel along with a group of young journalists and technicians, all of whom are working as volunteers. Friends of Farjallah donated the equipment, office and studio space.

“Many people contacted me, wanting to volunteer and join the team,” Farjallah told Al-Monitor. “We are currently 10 people, and that is enough for now.”

She explained, “We, as a team, believe that changing the existing political system needs time and patience, so we wanted to establish this channel in order to bring about change and reach the Lebanon we dream of. We live in a tragedy, not a homeland, and the channel will remain even if protests and demonstrations in the streets stop.”

Assolta4 will not be competing with traditional media or duplicate it's format, Farjallah said. “This platform will broadcast short videos and reports and is not bound to specific times, unlike traditional media,” she noted. “It does not resemble Thawra TV either, which only reports on protests and events from the squares directly. Our platform doesn't only convey events, but also aims to create change.”

As for project funding, Farjallah remarked, “There are no funders of the project, contrary to what some are claiming. I have no money. We decided to achieve change on scant finances. I only have digital marketing, which I can do with the available capabilities.”

Sonia Zgheib, a volunteer journalist, told Al-Monitor, “The importance of my participation in Assolta4 lies in the fact that it is the best way through which change can be reached so that Lebanon becomes the country we want it to be, especially because this channel is not politicized and everyone volunteers for free.”

“I did not hesitate to communicate with those in charge as soon as Farjallah called for volunteers,” Zgheib added. “I participated in this experiment, which I consider to be very significant, for two reasons. First is because the main element of the revolution is the youth, and I am one of them. We are having an economic, social and even psychological war, so we want to say that the youth want a new country, and through this channel we will convey the change we seek. Second is to address other youths and tell them not to follow their parents and parties anymore.”

Hadi Mounla, who is active in the popular movement, told Al-Monitor, “It is impossible to form a complete opinion for or against the channel before the actual broadcast, because nothing is clear or tangible so far. But in general, such initiatives are positive, especially those that launch on social media and resonate well with youths. Yet, I think that it is necessary to allocate segments to the protests in the streets and not only to reports and programs, as the channel promotes, especially as I expect the movements on the streets to regain momentum with the beginning of summer, amid the ever-exacerbating crises in the country.”

Batoul, an activist who requested anonymity for professional reasons, told Al-Monitor, “The idea of a revolutionary channel, much like the newspaper 17 Teshreen, is very important in the sense that this new channel can convey a neutral voice and is not affiliated with political financiers or parties as we are used to in all Lebanese media. This is why this channel, as an idea, even before anyone can see and judge its content, is needed so people can feel that they have a free, independent platform that expresses their voices.” A group of a social activists and journalists founded 17 Teshreen (17 October), releasing the first issue on Nov. 28.

“At the same time,” Batoul added, “it is important that this channel not make the same mistake as the traditional television channels, which declared support for the revolution but still gave airtime to politicians and corrupt officials and indirectly tried to polish their image, because they are still working according to political agendas under the table while publicly supporting the revolution. Farjallah posted a video on Facebook requesting an interview with President Michel Aoun, which raised many questions, so I wonder, if that is how things are now, where can they go from here.”

Ayman Mhanna, director of the SKeyes Center for Media and Cultural Freedom at the Samir Kassir Foundation, told Al-Monitor, “There is a wide gap between traditional media and a very large number of viewers, especially the younger generation, who follow a new way of consuming media material. Alternative media respond to this more than traditional media, and not just television. Alternative media platforms like Megaphone, an independent electronic media platform that produces animated multimedia content to cover local news, and what it has recently provided indicate a demand for a new method in media consumption.”

“Globally, the experiment of alternative media demonstrates youths' yearning for new ways of consuming news,” Mhanna said, “but there are not many examples today of integrated [broadcast] television channels that are alternative channels, as the economic model that makes them sustainable is unavailable due to its high cost, unlike online media sites, which rely on subscription fees and ads.”

According to Mhanna, there are three criteria for Assolta4's potential success and other alternative platforms like it: a yearning for something new and independent, for that independence to be melded with impeccable journalism, and the production of quality content.