As coronavirus spreads to Gaza, Israel can offer little

The nightmare scenario of the coronavirus reaching the Gaza Strip has become a reality, with Israel and Palestinians fearing a mega-catastrophe in the most crowded spot on earth. 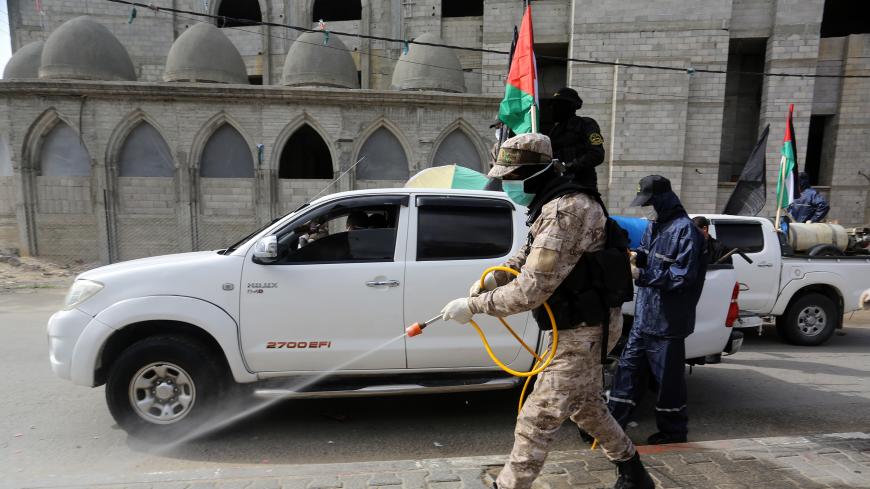 The idea of the coronavirus striking the battered and impoverished Gaza Strip and leaving a trail of destruction in its wake was once considered a nightmare scenario. Now, it is starting to look real. On March 26, the number of confirmed coronavirus cases in Gaza rose to nine, but authorities in Israel and the Gaza Strip are concerned that this is not the real number. The problem is that very few people have been tested, and even if testing takes place, the means available to protect oneself in Gaza are sparse at best.

One Israeli source involved in what has been happening in Gaza describes how the virus-carriers got infected. It all started about two weeks ago, when two Palestinians arrived in Gaza after spending time in Pakistan and Cairo. They arrived at the border crossing with Egypt by bus, together with many other Gazans, and when they crossed over into the Gaza Strip, they were told that they needed to be quarantined. They agreed, but asked for a chance to say hello to their families first. Five Hamas police officers went with them and watched as they hugged and embraced their family members without any protection whatsoever. The travelers were then taken to a quarantine facility. It has since been learned that the five police officers who accompanied them were found to have the coronavirus. What is not yet known is the status of everyone else they came into contact with over the last few days.

Regardless, the virus that causes COVID-19 is already in the Gaza Strip. The (rhetorical) question now being asked is whether the local health system will be able to cope with the challenge, when even wealthier and better equipped health-care systems around the world are having a hard time rising to the challenge. Physicians for Human Rights has been collecting statistics about the situation in Gaza on a daily basis. According to the most recent update on March 25, only 144 tests were conducted on a population of approximately 2 million, squeezed into a densely populated area with extremely poor conditions to maintain hygiene. The continued spread of the virus will definitely result in the collapse of the already impoverished health system in Gaza, where the total number of intensive care beds is just 70, and there are only 65 ventilators, some of them already in use.

On March 26, the Israeli office of the Coordination and Liaison Administration (CLA) for Gaza announced that 1,000 test kits, protective equipment and disinfectant were provided to Gaza. When the equipment was delivered, the head of the CLA, Col. Iyad Sarhan, said, “This undertaking by the World Health Organization and other groups around the world fills an important niche in the need for health care in the Gaza Strip. The CLA for Gaza will continue to assist international organizations reduce the spread of the coronavirus in the Gaza Strip.”

The real problem lies with the most critical equipment of all — ventilators. These are not forthcoming from Israel, or from other countries, which once donated raw materials and medical equipment to rescue local hospitals lacking basic medical equipment. It was only with the creation March 24 of the Special Knesset Committee on Dealing with the Coronavirus that the Knesset Research and Information Center prepared a report on the issue, at the request of committee Chairman Ofer Shelah. The report offers the following disconcerting figure: There are just 1,437 available ventilators in all of Israel. This is not enough to meet the needs of the number of patients anticipated by the Ministry of Health in the next few weeks.

Evidence of Israel’s desperate rush to obtain ventilators, after the country’s health-care system was neglected for years, can be seen in remarks made by Minister of Defense Naftali Bennett this week. He said, “We will bring in ventilators from every corner of the world, cleverly and with cunning.” Even if Israel really is able to act “cleverly and with cunning” to get its hands on this precious commodity, it is very safe to assume that they will not be sent to Gaza. That is why all the red warning lights are flashing at the offices of aid organizations in Israel. They are worried about a potential catastrophe bringing disaster upon the Palestinians in the Gaza Strip, but also that Israel would be blamed for the consequences, because of its long and unremitting closure of the territory.

Ghada Majadle, freedom of movement coordinator at Physicians for Human Rights, told Al-Monitor that her organization approached the Israeli Ministry of Health and the Coordinator of Government Activities in the Territories with questions and requests concerning Israel’s preparedness for the spread of the virus, but that it did not receive any answers. “We asked if there was a plan [in the event that the virus spreads in Gaza], and what would be done in the event that it poses a real risk,” she said, adding that this is not just a matter of some shortage of medical equipment. It also involves such issues as whether patients in a critical condition would be transferred from the Gaza Strip to Israel or to hospitals in the West Bank, particularly since Gaza is now under closure.

Nor is it certain that hospitals in the West Bank would be able to accept patients from Gaza, especially since the Palestinian Authority is also deeply concerned about the spread of the virus. These hospitals are not equipped to accept large numbers of patients, especially since they also suffer from a shortage of such critical medical equipment as ventilators. Only one thing is certain: Despite all the flashing red warning signals, it looks like very little can be done apart from increasing defensive measures and isolation in the Gaza Strip. Still, it is important to remember that Gaza is the most densely populated place in the world. In fact, the United Nations warned in 2015 that by 2020, Gaza might no longer be inhabitable.

Majadle noted that this feeling of helplessness can also be attributed to the fact that countries that once helped and donated to the rebuilding of Gaza are now busy dealing with the spread of the virus at home. Even if they do donate money, it is doubtful whether it can be used to purchase medical equipment and other essential items for hospitals in the Gaza Strip, especially since those hospitals are already in a state of collapse, regardless of the global pandemic.

She added that Israel cannot wash its hands of what is happening. “Israel cannot say, 'We’re having a hard time too, so we can’t help you.' International law obligates Israel to ensure that the basic health needs of Gazans are met.”

But international law is one thing, and the ability and means to provide meaningful aid to the Gaza Strip is another, especially during a pandemic. Even Qatar, which has taken Gaza under its protection and transferred hundreds of millions of dollars to keep Gaza’s shaky economy alive (and which pays the salaries of Hamas employees), would have a hard time helping in these unusual times. It may be a wealthy emirate, but it is also tiny, in terms of both size and population. The number of hospital beds there is intended to match the needs of that local population and little more.

Will it be possible to transfer ailing patients from Gaza to the wealthy Gulf state? Will Qatar be able to purchase ventilators for the Gaza Strip, especially given that these are in such high demand around the globe? It is unlikely.

“I don’t know what the situation of health services in Qatar is like, and whether the situation there is better than it is in Israel,” Majadle added.

More generally, if real help from Qatar is impossible in the event of the virus spreading, the issue of the occupation and closure will be raised in all its intensity, making it impossible to maintain the situation much longer. The problem is that the cost of reaching such a solution will likely be especially steep.