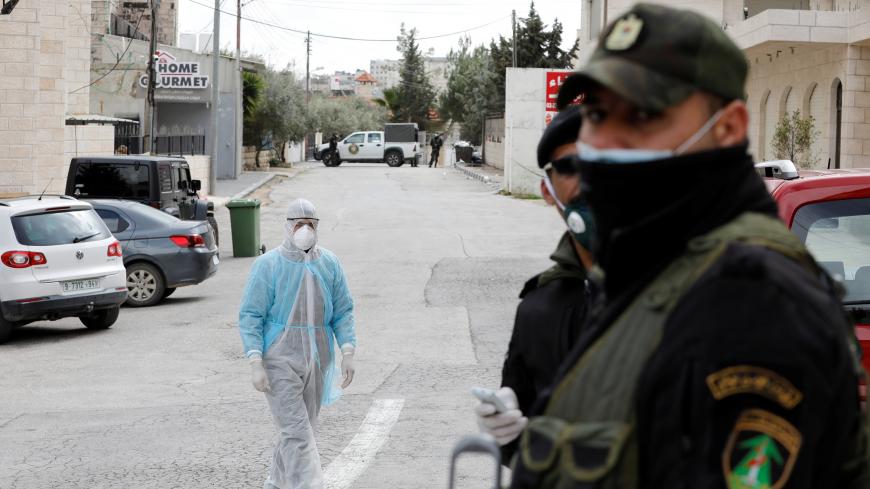 A man in a protective suit walks outside the Angel Hotel, where a group of American visitors have reportedly been quarantined as part of precautions against the coronavirus, Beit Jala, West Bank, March 7, 2020. - REUTERS/Mussa Qawasma

Prime Minister Benjamin Netanyahu’s Feb. 2 declaration that he had “instructed” the Israel Biological Institute to develop a vaccine against the novel coronavirus and to establish a production line in Israel does not appear to have made much of an impression on the virus. It continues to infect people around the globe — with 50 cases diagnosed in Israel so far — and no end in sight.

The lead stories on the news focus on border closings and airline groundings. Along with worrying reports about the spread of the disease, however, there is some encouraging news. Talk of Israel annexing Palestinian-populated areas of the West Bank has made way for discussion about the importance of Israel cooperating with its Palestinian neighbors. One miniscule virus has illustrated to Israelis the limits of their country’s power. The organism hops over walls and fences and mocks the Iron Dome anti-missile defense system. It threatens the Palestinians stopped at barriers as they try to enter Israel to work and scares the Israeli soldiers searching them for weapons.

“There are no borders here,” Brig. Gen. Ghassan Alian, the military’s point man for civilian Palestinian affairs, told Kan Radio on March 8. “There is no ‘them’ and ‘us.’… People in Judea and Samaria [the West Bank] live together.” Alian's colleague Dalia Basa, the civil administration’s health coordinator, was quoted as saying: “Bacteria and viruses do not stop at the border, and the spread of the dangerous virus in Judea and Samaria can also jeopardize the health of the residents of Israel.”

Coordination of Government Activities in the Territories has been working over the past two weeks to assist the Palestinian Authority (PA) in preventing a coronavirus outbreak in the West Bank and Gaza. As part of the initiative, Israel gave the PA 250 coronavirus test kits. Joint training sessions for Israeli and Palestinian medical personnel were organized to educate them about the virus, protection for health care workers and testing of suspected carriers.

On the other hand, Defense Minister Naftali Bennett remains unfamiliar with the language of cooperation with the Arabs. The head of the Yamina, an alliance of right-wing parties, preferred to claim his 15 minutes of virus fame on March 5 with a unilateral decision to impose a closure on the West Bank Palestinian town of Bethlehem, where several people had been diagnosed with the virus. The next day it was reported that he was considering closing the entire West Bank, which is in any case under lockdown this week due to the Jewish Purim holiday, as it is during all Jewish celebrations.

Of note, only 465 kilometers (289 miles) of the planned 766-kilometer (475 miles) separation wall have been completed. Various assessments put the number of Palestinians who work illegally in Israel every day at 30,000 to 40,000. Most of them are barred from entering on security grounds, but fear of being arrested does not stop them from trying to eke out a living.

The global coronavirus outbreak is also a stark reminder of the need to deepen regional cooperation on environmental issues, said Gidon Bromberg, Israeli director of EcoPeace Middle East. In an interview with Al-Monitor, Bromberg asserted, “Building walls and barriers misleads the public into thinking that one side can successfully disengage from the other.” The veteran activist added, “The science of ecology and biology is there to remind us that we can never disengage from a shared environment.”

Bromberg told Al-Monitor that EcoPeace had to invoke the Freedom of Information Law to alert the public and politicians to the threat posed to Israel’s national security by the sewage crisis in Gaza. A March 2019 EcoPeace risk assessment report warned that the collapse of water, sewage and power infrastructure in Gaza posed an acute threat to Israel’s aquifers and seawater. With power shortages impairing sewage treatment, about 70% of all wastewater produced in Gaza flows untreated into the Mediterranean. In 2016, polluted wastewater resulted in the temporary shutdown of Israel’s water desalination plant in the southern coastal town of Ashkelon. The sewage flows can also result in increased bacterial concentrations further along the coast to the town of Ashdod. A 2017 State Comptroller report described the pollution of water reservoirs in Gaza and the West Bank as “an ecological failure” by Israeli government ministries. The government watchdog noted that wastewater in the Palestinian areas does not undergo proper treatment and flows into Israeli rivers and cesspools, polluting the aquifers.

Like aquifers, the air we breathe also does not recognize the Green Line or care about the “deal of the century.” Dozens of charcoal plants in PA-controlled areas release pollution into nearby Israeli towns and villages. The Ministry of Environmental Protection has determined that prolonged exposure to wood burning can be a health hazard. The porousness of the West Bank-Israel border was also illustrated by the spread in Palestinian areas of hoof-and-mouth disease in 2001 during the second intifada. The closure Israel imposed on the West Bank made it difficult for veterinary teams to address the crisis and prevent the disease's spread into Israel.

“The outbreak of the coronavirus must be a wake-up call to the fact that promoting cooperation over our shared environment is needed not just in emergencies, but every day,” said Bromberg. Years of cooperation with Palestinian and other Arab colleagues taught the EcoPeace leader that cross-border environmental cooperation promotes understanding “that we are in the same boat, and that to advance our own security we must advance cooperation with our neighbors.”

David Lehrer, executive director of the Arava Institute for Environmental Studies, believes a partnership between Israelis, Palestinians, Jordanians and others from the region is not only possible but essential. In an interview with Al-Monitor, he noted that the coronavirus has not yet been linked to climate change but added, “[It is a] frightening example of what a global threat looks like and highlights the need for cross-border cooperation.”

Lehrer expressed the hope that Israelis will no longer be indifferent to what is happening on the other side of their borders with Gaza, the West Bank, Jordan, Syria, Lebanon and Egypt. Arava is an internationally recognized academic institution devoted to cross-border environmental leadership and is attended by Israeli, Jordanian, Palestinian and other students from around the world. In recent years, it has been leading a Track II environmental diplomacy forum that promotes regional environmental solutions and develops cooperation and joint projects to fight climate change. Arava's vision is to build a firm foundation of trust for a sustainable and peaceful two-state solution.

by Murielle KASPRZAK and Joseph SCHMID | AFP | May 26, 2022
END_OF_DOCUMENT_TOKEN_TO_BE_REPLACED