Press censorship in Egypt has most recently hit The Guardian and The New York Times following what it claims are "false rumors" of the coronavirus crisis in the country. 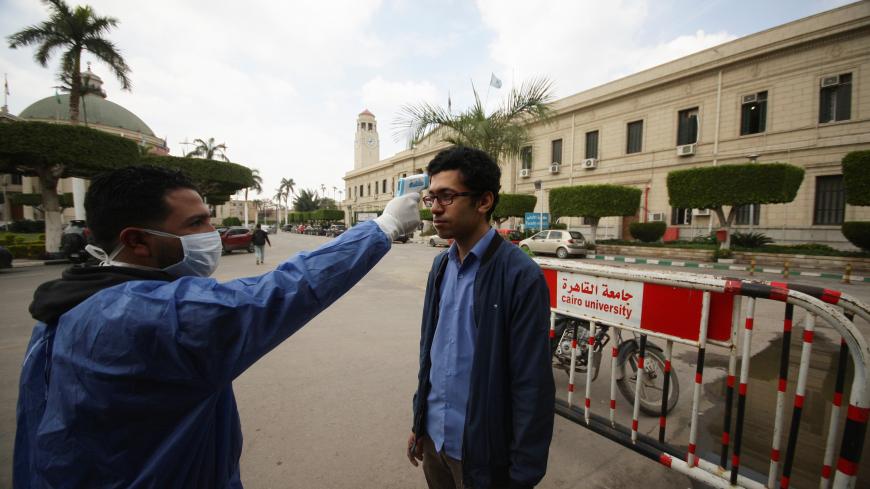 A medical staff member in protective gear checks the temperature of a master's degree student amid concerns over the coronavirus, following the suspension of study for only undergraduate students at Cairo University, to prevent it spreading, Cairo, Egypt, March 15, 2020. - REUTERS/Shokry Hussien

Egypt revoked the press credentials of a reporter for The Guardian and delivered thinly veiled threats of similar action against The New York Times over coverage of the coronavirus, part of an ongoing pattern of censorship of the press.

Egypt’s State Information Service (SIS) demanded an apology from The Guardian over what it called “a false report” citing a Canadian medical doctor who said the number of people infected with the disease in Egypt had reached over 19,000. The story carried by the respected British daily was written by Cairo-based freelancer Ruth Michaelson, who writes regularly for The Guardian.

The body that issues accreditation for foreign journalists said in a statement that it had “through its role in following up what is published about Egypt in the foreign media” monitored The Guardian piece that “includes incorrect numbers and estimates regarding the numbers of new cases of the coronavirus that is newly emerging in Egypt.”

The UN’s World Health Organization announced today that Egypt has 196 confirmed cases of the virus that causes COVID-19, out of 3,015 “suspected cases tested.”

“The correspondents' rush to promote incorrect data,” SIS said, “does not justify them relying on an unpublished … and scientifically unrecognized study. It shows their intentional bad faith to harm Egyptian interests.” Should The Guardian fail to run an apology it would be prevented from operating in Egypt altogether.

But then Walsh tweeted about Egyptian writer Ahdaf Soueif and three others who were detained today for organizing a small protest calling for emergency measures for Egypt's notoriously crowded prisons.

The New York Times had already landed in the crosshairs of the Egyptian authorities. In February 2019, former Cairo bureau chief David Kirkpatrick was detained at Cairo airport and held incommunicado. Egypt, alongside Turkey, Saudi Arabia and China, is among the world’s biggest jailer of journalists, according to the Committee to Protect Journalists.

The coronavirus pandemic has further sharpened censors in Egypt where the tourism industry, the country’s leading source of revenue — and apparently of the virus — is now faced with ruin. At least 97 foreign nationals who visited the country since mid-February have either displayed symptoms or tested positive for COVID-19, as reported by The Guardian.

Last week, Egyptian Prime Minister Mustafa Madbouly warned that legal action would be taken against anyone who spread “false rumors” about the pandemic.

“Egypt’s move to silence and punish certain well-respected international journalists for covering scenarios related to the spread of the COVID-19 virus inside its borders is sadly predictable,” observed Amy Hawthorne, deputy director for research at the Project on Middle East Democracy.

She continued in emailed comments to Al-Monitor, “It is also counterproductive. Egypt does face a very serious threat from the pandemic, and the Egyptian government, like some others around the world, has made worrying blunders in its initial response. The Egyptian authorities, like officials everywhere, should not suppress information flows and debate about this health emergency. They should focus on protecting the health and safety of everyone inside the country, not on crude repression.”

In January, police raided the Cairo offices of Turkey’s state run Anadolu news agency arresting four of its staff on allegations of spreading false news. Turkey’s continued support for the Muslim Brotherhood has strained relations between the two countries to the near breaking point.

Meanwhile, Turkey has been cracking the whip on people accused of sharing “provocative” content and “falsehoods” about the coronavirus. Some 24 such individuals were detained as of today of a total 137 suspects, according to Turkey’s Interior Ministry.

On March 14, two journalists in the province of Antalya on the Mediterranean coast, which draws millions of tourists, were briefly detained over their coverage.