The urgent conversation Trump, Putin need to have about Syria 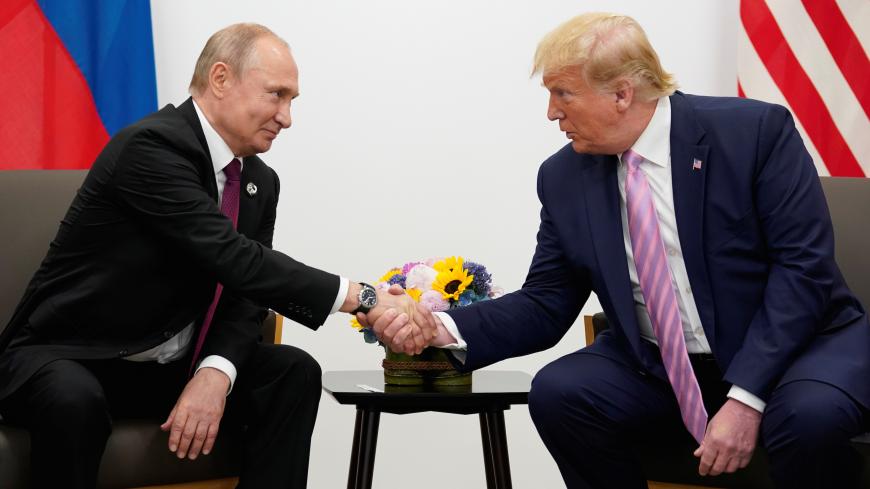 Turkish President Recep Tayyip Erdogan this week said that a military escalation in Idlib is “a matter of time” unless President Bashar al-Assad’s army withdraws to de-escalation boundaries agreed with Russia back in September 2018.

If the United States provides Patriot missile defense systems to Turkey, as Ankara has asked, it could further embolden Erdogan. The result could be an escalation that would exacerbate the terrible suffering of the Syrian people, while increasing the risk of a US-Russian confrontation in Syria.

This, therefore, could be a prime time for the Trump administration to address the crisis in Syria, but not just in the narrow sense of the Turkish military request. Others are already stepping in. UN Secretary-General Antonio Gutteres has called for an immediate cease-fire. But given the deadlock at the UN Security Council, which is vital to any progress in Syria, US President Donald Trump and Russian President Vladimir Putin probably need to talk and see if some common ground can be found..

Turkey seeks a US lifeline

Turkey has invited the United States into the mix already with its request for Patriot missile defense systems to thwart any future attacks by Russian-backed Syrian forces over Idlib province, where 15 Turkish troops have been killed this month in an escalating confrontation. Turkey is also asking Moscow for access to Russian-controlled airspace in Syria while increasing its troops and weaponry in the region.

Erdogan's call for Syria to redeploy its forces is so far being ignored in Moscow and Damascus.The de-escalation boundaries in the so-called Sochi Memorandum between Ankara and Moscow may be a dead letter. The Syrian military, backed by Russia and Iran, blew by those boundaries in recent weeks, including 10 of the 12 Turkish outposts established via Sochi. Assad's military has retaken dozens of villages in Idlib and Aleppo provinces, Mohammed Al-Khatieb reports, while seizing a key highway between Damascus and Aleppo. Assad until now shows no intention of stopping, especially with the backing of Russia and Iran.

While Trump apparently made no commitments to Erdogan in a Feb. 16 phone call , according to Amberin Zaman the Turkish request has the support of some in the administration who see an opportunity both to repair the troubled US-Turkey relationship and stymie Syria’s military offensive. Trump has been cautious about getting pulled into the fighting in Syria, except over chemical weapons use that he has responded to twice (in 2017 and 2018). The United States might consider some intelligence and logistical support to Turkey, according to Zaman, and the Patriot request is still being considered, Jack Detsch reports.

Here’s the catch for Erdogan: Syria is his endless war. He has no endgame, absent a huge assist from the international community, meaning both the United States and Russia, and eventually some accommodation with Assad, as Turkey’s opposition parliamentarians are now demanding, Sibel Hurtas reports. Here are three reasons Erdogan can’t solve Syria with just a military solution:

Refugees. Turkey currently hosts 3.6 million Syrian refugees (there are 5 million worldwide, out of a pre-war Syrian population of 22 million). This is an incredible strain on the Turkish economy. Erdogan has said he will relocate the refugees into a Turkish-controlled zone in northeast Syria. This is hardly an answer, as it would simply shift the Syrians' status from "refugees" to "displaced." There are already 6.2 million internally displaced people in Syria — the largest of any country in the world. The recent fighting has produced another 900,000 displaced Syrians, all headed toward Turkey, whose border is closed. A joint statement by Russia, Turkey and Iran in October 2019 set the return of all IDPs and refugees "to their original places of residence” in Syria, which is the ultimate solution, but a long way off.

A second front with the Kurds. Erdogan’s preoccupation with Syrian Kurdish "terrorists" has complicated his relations with the United States and allowed a vulnerability with Putin and Assad. Russia has been pressing for a deal between the Kurds and Damascus, including a secret meeting in December involving Kurdish officials and Syrian intelligence chief Ali Mamlouk, according to Fehim Tastekin. The United States has cautioned its partner the Kurdish-led Syrian Democratic Forces to keep out of the present conflict. But “the straining of Russian-Turkish ties over Idlib has resulted in some undeclared changes in Kurdish tactical choices,” writes Tastekin. “The Kurds are collaborating with the Syrian army in certain parts of the operations in northwest Aleppo, namely in areas along the boundaries of Afrin.” By putting the Kurdish card into play, Putin is implying the threat of a second front in areas occupied by the Turkish military.

Turkey’s muddled relations with Hayat Tahrir al-Sham (HTS). Russia blames Turkey for making matters “worse” by not separating terrorist groups (those linked to Jabhat al-Nusra such as HTS) in Idlib from more moderate or nationalist opposition forces, as called for in Sochi. Both the United States and the UN Security Council have designated HTS a terrorist group. US Syria envoy James Jeffrey said there are at least 7,000-10,000 Jabhat al-Nusra-linked members in Idlib. HTS “is a de facto ally of Turkey,” explains Tastekin again. It controls 90% of Idlib and “will not lose its jihadi character even if it rebrands itself again" and "Regardless of what Ankara’s intentions are, its latest intervention in Idlib has put the Turkish military on the same side with [HTS] and its allies.” On Jan. 29, Erdogan referred to those “defending their own land” as “resistance fighters,” not terrorists. The closer the fighting in Idlib gets to Turkey, the closer it approaches areas under HTS control. “One cannot help but wonder how Turkey is going to confront the groups with which it has actively collaborated since late January,” Tastekin concludes.

A Tough Call on Syria

UN Syria envoy Geir Pedersen briefed the Security Council this week on the "devastating scale of humanitarian suffering" and reiterated Gutteres' call for an immediate cease-fire.

Putin and Erdogan talked today and both should have some interest, sooner or later, in preventing a further downward spiral in ties over Syria. Maybe. But for now they still seem far apart, Metin Gurcan explains. Erdogan is also requesting a four-way summit to include his and Putin’s French and German counterparts, Emmanuel Macron and Angela Merkel. A forthcoming meeting of the Astana trio in Iran represents another next step on this diplomatic track.

Involving France and Germany is a good move, including for Washington’s interests. But the only way there is progress in Syria — both in terms of a lasting political solution and alleviation of the humanitarian crisis — is if the United States and Russia can find some common ground.

There are no illusions here that Putin is anything other than 100% behind Assad and for now has no intention of stopping Syria's military offensive.

But Trump has good relations with both Erdogan and Putin. All three operate by personal connection, and the action moves when they talk. Trump has repeatedly expressed his concern over the carnage in Idlib, so this does not come out of the blue. The United States is a player in Syria, commanding significant assets and influence and sustaining the counter-terrorist operations against the Islamic State, Detsch reports. US leverage at the UN is unmatched. Trump could call Putin while weighing the Patriot offer — maybe keeping it as a chit for now. Putin, for all his bravado, neither wants nor needs more trouble with the United States. He wants to be the broker of an endgame in Syria, and knows that eventually he has to deal with Trump. And Trump can work with and through Macron and Merkel if they decide to engage.

Getting more involved in Syria is a tough call, but Trump doesn’t seem to shy away from tough calls. If any global crisis deserves a shot at the art of the deal, it's Syria, whose people have suffered far too much.