The Donald Trump administration is doubling down on its bid to cut Palestinian aid by tying it to congressional funding for the president’s Middle East peace plan. 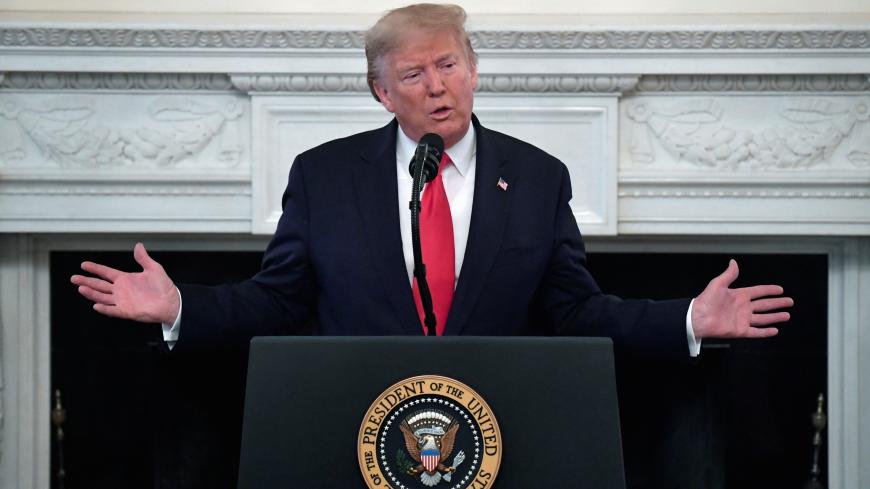 US President Donald Trump makes remarks during the White House Business Session with the nation's governors in the State Dining Room of the White House, Washington, DC, US, Feb. 10, 2020. - REUTERS/Mike Theiler

The Donald Trump administration is using Palestinian security aid as leverage in a gambit to convince Congress to fund its recently unveiled Middle East peace plan.

The State Department’s 2021 budget request, released today, would zero out all aid for the West Bank and Gaza for the first time since President Trump took office. Trump first eliminated Palestinian economic and humanitarian aid in 2018, but the 2021 budget request would condition the remaining security assistance on $200 million in funding for his Israeli-Palestinian peace initiative, dubbed the Diplomatic Progress Fund.

Instead of directly funding Palestinian security aid, the budget designates $25 million within the Diplomatic Progress Fund as security assistance. The document notes that the security aid can be used “to support critical diplomatic efforts that may emerge in the future, such as progress on a plan for Middle East peace.”

The news site Axios reported last year that Trump rejected Israeli Prime Minister Benjamin Netanyahu’s request to restore Palestinian security aid, arguing that Israel should fork over the cash itself. Israel favors the security aid as it helps the Palestinian Authority crack down on Hamas and the Islamic Jihad in the West Bank.

“Any US assistance provided to help Palestinians at this time would undercut the support of [Trump’s] attempt to drag them into supporting his peace plan,” said Andrew Miller, the deputy director at the Project on Middle East Democracy who oversaw Israeli military issues in the Barack Obama White House. “This is purely punitive, purely an effort at conditioning Palestinian behavior, and that takes precedence over any perceived security needs as articulated by his close partner [Israel].”

This year’s budget request would expand the scope of the proposed Diplomatic Progress Fund beyond Israel and Palestine. Specifically, the document states that the $25 million in security funding could also be used for “progress on Central America migration, agreement to resume security assistance in the West Bank, political transition in Venezuela, or other policy priorities.”

"The [fiscal year] 2021 budget request provides the flexibility for the [State] Department and USAID to respond to new opportunities arising from progress in diplomatic and peace efforts around the world, including, in principle, between the Israelis and Palestinians,” a State Department spokesperson told Al-Monitor.

Further complicating matters is the fact that Palestinian Authority President Mahmoud Abbas has threatened to end security cooperation with Israel if the Knesset moves forward with the West Bank annexation proposals laid out in Trump’s peace plans. CIA Director Gina Haspel secretly traveled to the West Bank earlier this month to discuss the plan’s potential impact on Israeli-Palestinian security coordination. The security cooperation that the US assistance facilitates is broadly unpopular with the general Palestinian public.

Netanyahu announced Saturday that Israel has started mapping out an annexation plan in line with the Trump proposal, which would allow Israel to retain all its settlements and expand its control over the entire Jordan Valley.

While Republicans have lined up behind the Trump peace plan, they have also joined Democrats in overwhelmingly rejecting the president’s repeated proposals to cut foreign aid. In December, Congress severely curtailed Trump’s ability to reprogram foreign assistance — a technique the president first used to end Palestinian humanitarian and economic aid in 2018.

Undeterred, the State Department is still seeking a 21% cut in foreign aid this year, which comprises approximately 1% of the federal budget.

Still, some analysts note that the Trump administration is becoming more creative as it attempts to sell its more unpopular proposals to Congress by tying them to programs favored on Capitol Hill — such as Palestinian security aid.

“They’re looking for clever ways to strengthen their hand in other priority areas,” said Miller. “It’s obvious they’re learning to a certain degree.”