Netanyahu’s Africa blitz: photo-ops and pleasing the US

Israeli diplomats fear that the drive for cooperation projects with African countries is being replaced by Prime Minister Benjamin Netanyahu’s desire for photo-ops and by hints that relations with Jerusalem would open the door to Washington. 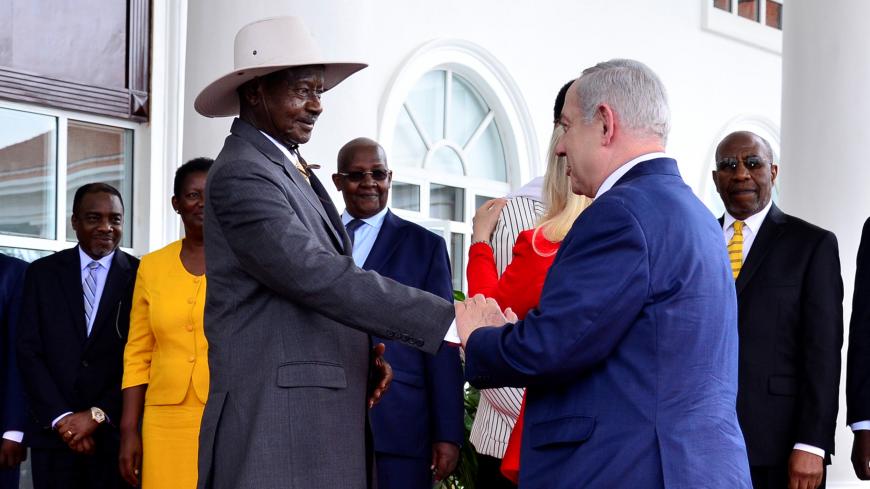 Sudan reported Feb. 2 that Washington had invited head of its Sovereign Council Gen. Abdel Fattah al-Burhan for a visit. The following day, Prime Minister Benjamin Netanyahu visited Uganda, secretly meeting there with Burhan. After the meeting, Netanyahu announced proudly to the world that Israel and Sudan, two enemy countries, agreed to work together toward normalizing ties. A statement issued by Netanyahu’s office noted that the prime minister believed the current Sudanese regime is headed in a new positive direction, and that he had also expressed this view to US Secretary of State Mike Pompeo. "Burhan is eager to help his country modernize by taking it out of isolation and putting it on the world's map," the statement read.

Indeed, Netanyahu’s diplomatic blitz was applauded not just in Jerusalem, but also in Washington. Pompeo praised both countries, congratulating Burhan on "his leadership in normalizing ties with Israel." In Sudan, on the other hand, things looked a bit different, with the government cautiously noting that Burhan informed no one and consulted no one before taking off to Uganda. Clearly, the road to normalizing ties between Khartoum and Jerusalem is not going to be as smooth as presented by Netanyahu in Kampala.

Israel and Sudan have a turbulent past, with two issues at the crux of animosity: Iran and the conflict with the Palestinians. Back in January 2009, mysterious fighter jets attacked an Iranian arms convoy in the Sudanese desert. In April that year, an Iranian vessel laden with arms bound for the Gaza Strip was torpedoed off the coast of Sudan. Khartoum suspected that Israel was behind the attacks, in an attempt to thwart arms smuggling into Gaza. The toppling of Sudanese President Omar al-Bashir in April 2019 changed the country’s priorities, with its new leaders distancing themselves from Tehran. But what exactly do the current leaders in Khartoum expect from Israel?

Over the past decade, Netanyahu has invested much efforts in cultivating Israeli ties with African states, or in his own words, "bringing Israel back to Africa." He had stated on numerous occasions that Africa is part of Israel’s list of diplomatic priorities. Netanyahu made no secret of the fact that he was hoping to change the balance of power within the United Nations through this African campaign. He argued that Israel needs the African countries on its side in its UN battles against the Palestinians. Still, he kept noting that his African efforts embodied Israel’s long-term vision of showcasing its commitment to share with others its best practices and technologies in fields that include smart agriculture, water management, high-tech and health innovation.

Netanyahu made a point of listing his trips to the African continent, his contacts with African leaders and renewed relations in the framework of Israel’s international cooperation policy. It was important for him to show that Israel in Africa is not only about selling weapons or exporting mercenaries. True, with the surge of Islamic extremist groups in Africa, the component of security cooperation has become essential in the multiple bilateral ties, but these efforts married well with global efforts for sustainable development of the fragile Sahel region.

The renewal of ties with Chad in January 2019 signaled perhaps the first change in Israel’s own perception of its relations with Africa. Last July, the government approved the appointment of Israel’s ambassador to Ethiopia Raphael Morav also to the position of nonresident ambassador to Chad. Morav is a diligent and hard-working ambassador. Since his arrival in Addis Ababa, he has established excellent contacts with the Ethiopian authorities and with the civil society. But his colleagues in the Foreign Ministry say that on the Chad front, he was able to advance very little. The dramatic announcement a year ago on renewing ties has not been translated so far to any significant projects in the fields in which Israel excels.

"There are many reasons behind the poor content of relations with Chad. The ministry has no more funding for anything in general, and Chad itself has hinted it is interested primarily in Israel’s security capabilities. Still, there is also a general feeling here that international cooperation is no longer the basis for bilateral ties with African countries. Some countries are interested in Israel just as a gateway to the United States, and on our end, Netanyahu ahead of elections is in a constant quest for photo-ops," a diplomatic source told Al-Monitor on condition of anonymity.

Sudan might be the classic case for such a double approach. Khartoum is desperate to have the US sanctions lifted against it and to be removed from the US list of countries sponsoring terrorism. Changing the current US policy is the key for Sudan extracting itself from international isolation. Israel’s expertise in agriculture is mostly needed in hungry Sudan, but according to the source this was not the primary motivation behind the Netanyahu-Burhan meeting.

"Normalizing ties with Sudan is wonderful news for Israel and a great step in isolating Iran’s system of proxies. Still, we would have preferred for this development to take place vis-a-vis the civil elements in Sudan’s Sovereign Council instead of vis-a-vis Burhan. It is with the Sudanese people that we want to make peace and construct useful ties, not the military," said another diplomatic source, speaking to Al-Monitor on condition of anonymity.

Before his arrival in Uganda, Netanyahu’s advisers pushed the news as if President Yoweri Museveni was going to announce the opening of a Ugandan Embassy in Jerusalem. That did not happen. Museveni contented himself with saying that he was "studying" the issue. Left with little on that aspect, Netanyahu spoke at large on strengthening bilateral cooperation on a wide variety of issues, including agriculture, health, water, energy and communications. For many in the Israeli Foreign Ministry, these were the exact words they were waiting for in the first place.