With more and more settlements constructed, the 'one-state' solution might be the only feasible one. 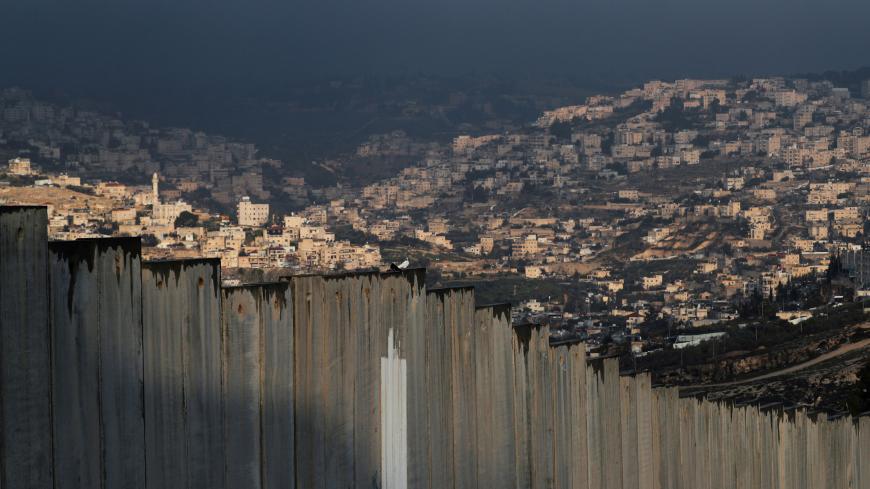 A general view shows the Israeli barrier and, behind it, East Jerusalem neighborhoods, Jan. 29, 2020. - REUTERS/Ammar Awad

It is not at all clear whether US President Donald Trump’s “deal of the century” will ever be implemented, but the very fact that it has been made public is having an impact on the mood in Israel and the Palestinian Authority (PA). Remarks made by the president, when the plan was first revealed on Jan. 28, did not fall on deaf ears. Many people in Israel have come to the conclusion that the ultimate purpose of the plan was the immediate, unilateral annexation of the territories by Israel. Meanwhile, in the PA, many are convinced that the plan moves the Palestinians even further away from realizing their dream of an independent and sovereign Palestinian state alongside Israel. It now looks like the number of people on both sides who no longer believe in a two-state solution is increasing and will continue to grow, even if only gradually.

Back in September 2018, Trump said that both parties — Israelis and Palestinians — can decide on their own whether they would prefer two states or a single state. At the same time, support among the Palestinians for the idea of a single state was increasing. In 2002, when Libyan leader Moammar Gadhafi proposed his solution to the conflict, which he called “Israetine” (his proposal for the name of a new state, in which both peoples would enjoy full equality), the idea of a single, democratic state from the Mediterranean Sea to the Jordan River was met with derision and ridicule in Israel, the PA and the Arab world at large. A lot of water has flowed down the Jordan River since then. It now seems as if the younger generation in the PA and a significant number of Israelis, including both settlers and supporters of the left, have adopted the idea of a single state as their final default solution, capable of ending the Palestinian-Israeli conflict.

According to a new poll published Feb. 11 by the Ramallah-based Palestinian Center for Policy and Survey Research (PSR), headed by Khalil Shikaki, support for a two-state solution stands at less than 40% for the first time since the signing of the Oslo Accord. About 61% of respondents no longer believe that a two-state solution is viable, given the expansion of Israeli settlements in the West Bank. Shikaki tweeted as much just two weeks before the release of the deal of the century, saying that only 28% of Palestinians supported the idea of a single-state solution, but that number skyrocketed to 37% after the plan was released. In an article published in Haaretz upon the release of the deal of the century, Israeli-Arab journalist Nabil Armali wrote, “Actually, the Palestinians no longer have any tools with which they can fight against Israel, apart from describing the potential damage that some envisioned single state would cause. Armed struggle doesn’t have a chance, and it is not worth depending on support from the Arab states or the Arab street.”

There has also been a dramatic shift among Israelis regarding the question of a possible solution to the Palestinian-Israeli conflict. The younger generation is having a hard time connecting with or believing in the idea of a two-state solution. A survey of Israelis and Palestinians conducted by Tel Aviv University’s Tami Steinmetz Center for Peace Studies, together with the PSR, published its findings in January 2018, noting that most Israelis and Palestinians no longer support a two-state solution. The survey also found that some 33% of Jewish Israelis expressed support for the idea of a confederation.

For several years now, Emanuel Shahaf, a former member of the Mossad, has been promoting the notion of a Jewish-Arab federation. The idea is that a future federal entity would be divided into “states,” similar to those of the United States, and thereby grant equality to all of its residents. Shahaf told Al-Monitor that the Trump plan proves it is impossible to create two states here in a reasonable manner. “You just look at the map and realize that it is impossible to use it to create two states,” he said. “If the occupation continues, it will lead to an apartheid government, so of course, that is untenable. I don’t believe that a two-state solution would resolve the conflict, since it fails to resolve the most basic problems.” Shahaf contends that his vision has a certain amount of support among the left, meaning within the Labor and Meretz parties, but also among supporters of the right, at least on a municipal level.

A survey conducted in January by the Smith Institute examined Israeli attitudes to the idea of a federation. According to its findings, about 18% of Jewish Israelis supported the idea of a federation, a significant number when considering it is a rather anonymous initiative without any government backing. Another 33% had no opinion on the matter, while 49% of Jewish Israelis completely rejected the idea. Shahaf claims that most people know nothing about the existing initiatives supporting a federation or confederation, so the public has a hard time positioning itself in response to them.

Another initiative, which has been around for about eight years, includes the idea of two sovereign states united in a confederation. Known as “A Land for all,” the initiative is advocated by journalist and media professional Meron Rappaport, with support from people on the left such as Avi Dabush (Meretz), but also from the religious Zionist movement, such as poet and intellectual Eliaz Cohen and Michal Froman, daughter-in-law of late Rabbi Menachem Froman who lives in the settlement of Tekoa. “There is a very basic and real debate between those who think that there should be sharp separation between us and the Palestinians, with “Us here and them there,” as a solution to the conflict, and those who think like us in “A Land for all” that the solution can actually be found in a partnership between two independent states, Israel and Palestine, and between the people living here,” wrote Rappaport in an opinion piece in February 2019.

Ostensibly, this initiative by Rappaport and the members of “A Land for all” offers the perfect solution. It includes freedom of movement, justice, security and sovereignty for everyone. On the other hand, it is doubtful that this idea can be implemented in the complicated reality of the Middle East, where the desire for any compromise whatsoever between the two parties has been dwindling over the years.

Col. (Res.) Shaul Arieli, who studies the Palestinian-Israeli conflict, is convinced that the idea of a confederation would have disastrous results. Instead, he continues to claim that the only viable option is a two-state solution. The question is what will happen a few years down the road, assuming that no real progress is made to find a solution to the conflict. The younger generation, which will come to power here in a decade, tends not to believe in the traditional formula of a two-state solution. Meanwhile, the situation on the ground is constantly changing: New West Bank outposts are being established, existing settlements are expanding and Palestinian lands continue to be confiscated. It is entirely possible that Israel and the PA are marching quickly to the point of no return, where a single, binational state awaits. If that does, in fact, happen, it would be prudent to begin as soon as possible to examine the various initiatives that describe what such a state would look like.