In an unusual move, Egypt has failed to intervene in Israel's latest military escalation on the Gaza Strip. 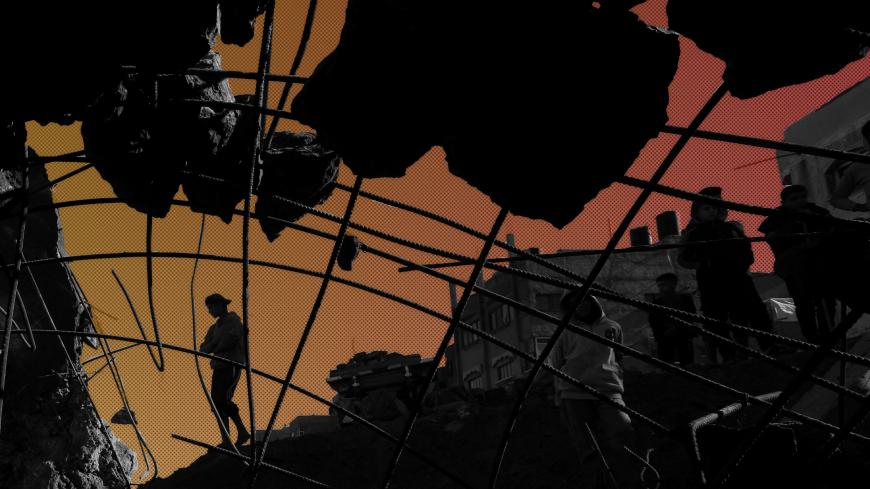 GAZA CITY, Gaza Strip — A series of military skirmishes broke out between Israel and the Gaza Strip this past week, the latest taking place Feb. 5 at dawn. Israeli aircraft launched raids on a Hamas position in the southern Gaza Strip after the Israeli army said three rockets were launched from the enclave toward Israel. The rockets fell on open spaces in the Gaza Strip.

The Israeli army launched several raids on Hamas military targets in the northern Gaza Strip Feb. 2 as a response to rockets and incendiary balloons that hit Israel from Gaza the same day.

Tensions resurged between Israel and Hamas after the latter resumed its launch of incendiary balloons Jan. 15 due to Israel failing to implement its commitments reached under an Egypt-brokered truce in March 2019.

The escalation further deepened between Israel and the Gaza Strip when President Donald Trump unveiled the provisions of the so-called deal of the century Jan. 28. Ever since, rockets and incendiary balloons have been launched almost daily from the Gaza Strip toward southern Israel, prompting Israeli military responses.

Egypt did not send a security delegation to the Gaza Strip to contain the situation and halt the military skirmishes, as it usually does.

The last visit of an Egyptian security delegation to the Gaza Strip took place Sept. 8 and aimed at cementing the truce. Another visit was scheduled Jan. 6 for the same purpose, but the delegation canceled the visit with no explanation.

An Egyptian member of parliament close to Egyptian intelligence, which is handling the mediation between Hamas and Israel, told Al-Monitor, “There are currently unannounced trust issues between Egypt and Hamas because the head of Hamas’ political bureau, Ismail Haniyeh, visited Iran Jan. 6 as part of his foreign tour. Hamas had not included Iran on the list of countries it would visit when requesting Egypt’s permission for Haniyeh to travel abroad.”

The source asserted that this did not prompt the two sides to cut ties, and that contact is ongoing between the Hamas leadership and Egyptian intelligence to discuss the escalation and restoration of calm in the Gaza Strip.

The source added that the Egyptian security delegation has not visited Gaza for months “because there was no need to, as Egypt was certain these skirmishes would not lead to a wide-scale war. Israel is not ready for such a war, with its third round of elections just around the corner in March.”

Official Hamas spokesman Hazem Qassem told Al-Monitor, “The current escalation is because Israel did not abide by some provisions of the truce understandings, including expanding the circle of exportation abroad, removing commodities from the list of prohibited products [allowed to enter] Gaza and establishing industrial zones on the Gaza borders.”

Qassem said that Hamas leaders and Egyptian intelligence are in touch daily and that they are discussing the political situation on the Palestinian territories and the truce between Gaza and Israel.

Talal Okal, political analyst and journalist at the Palestinian al-Ayyam newspaper, told Al-Monitor, “The Egyptian delegation has not visited the Gaza Strip for weeks, which indicates that Egypt is not happy with Hamas’ attempts to restore ties with Iran.”

Okal said that the improved relations between Hamas and Iran will cause more escalation and tensions between Israel and the Gaza Strip.

“Palestinians see the Egyptian role to cement the truce as temporary sedation," he said. "The truce lasts for a few days, then the situation blows up again between Hamas and Israel, due to Israel’s evasion of its commitments.”

He said that launching rockets on Israel carries a Palestinian message for Egypt to intervene more to force Israel to adhere to its commitments.

“I believe the situation will remain as is if Egypt does not offer guarantees in that regard,” Okal said.

He said, “Arrangements are underway to send an Egyptian security delegation to the Gaza Strip and Israel soon, at an unspecified time, to restore calm.”

Hol added that Israel “escalated its military response against the Gaza Strip during the past raids, which shows that Israel’s current minister of defense, Naftali Bennett, is flexing his muscles and seeking electoral gains in the March elections.”

Israeli Channel 7 cited a member of the New Right party led by Bennett as saying Feb. 3, “Bennett is preparing an important operation in the Gaza Strip to respond to the rockets and incendiary balloons that were launched."

Mustafa al-Sawaf, political analyst and journalist for Felesteen newspaper in Gaza, told Al-Monitor that it is unlikely “the escalation between Gaza and Israel would result in a new war, because neither Hamas nor Israel wants to take that step.”

He said, “Egypt is aware that the current escalation will not lead to a battle. For that reason, its security delegation has not visited Gaza. Perhaps a phone intervention will take place to contain the situation and prevent its exacerbation.”