From Russia with love: Turkish and Syrian spymasters meet in Moscow

The Moscow meeting between the Turkish and Syrian intelligence chiefs could suggest that a normalization process has finally kicked off between Ankara and Damascus. 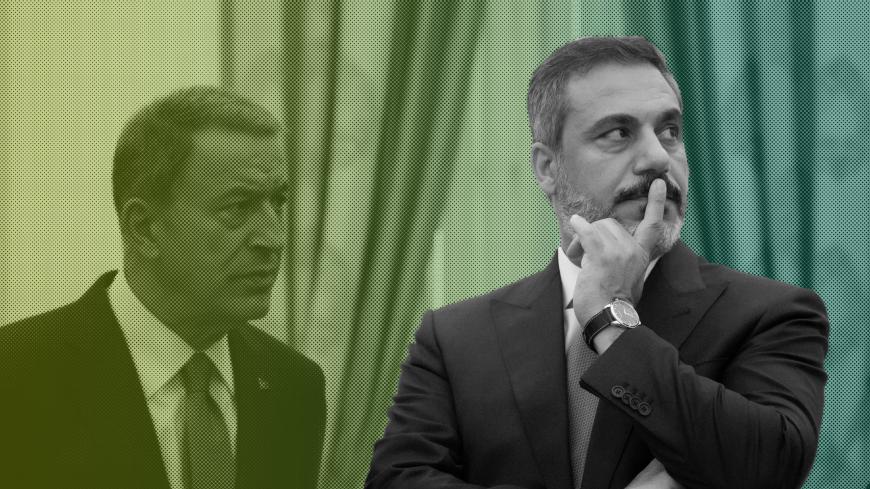 When Turkey’s intelligence chief and defense and foreign ministers traveled to Moscow last week, the main issue on their agenda was thought to be the conflict in Libya, but out of Russia’s toolbox came a surprise. Under Russian mediation, the Turkish and Syrian intelligence chiefs met face to face in what was the first high-level Turkish-Syrian encounter since 2011, when Turkey’s then-Foreign Minister Ahmet Davutoglu met with President Bashar al-Assad in Damascus. After nearly nine years of enmity, is the Jan. 13 meeting the precursor to a normalization process between the two neighbors?

To start with, it was Damascus that wanted the world to know the meeting took place. Syria’s official news agency SANA broke the news, running reports in both English and Turkish.

The Turkish version read: “The Syrian side, represented by Maj. Gen. Ali Mamlouk, the head of the National Security Bureau, urged the Turkish side, represented by Hakan Fidan, the head of the National Intelligence Organization, to fulfill its obligations under the Sept. 17, 2018 Sochi [agreement] on Idlib, particularly with regard to cleansing the region from terrorists and heavy weaponry and opening the Aleppo-Latakia and Aleppo-Hama highways.”

The Syrian side is said to have requested support to cajole Turkish-controlled armed rebel groups around Idlib into joining Assad’s forces.

Sources in Ankara told Al-Monitor the meeting took place after Russian President Vladimir Putin proposed to take low-level contacts between Turkey and Syria to a higher level at his Jan. 8 meeting with Turkish President Recep Tayyip Erdogan in Istanbul.

According to information obtained by Al-Monitor, the Syrian side urged Ankara to outline a timetable for the withdrawal of Turkish troops from Syria — first from the de-escalation outposts in Idlib, starting from those in the south of the province, and then from Afrin and the triangle between Jarablus, al-Rai and al-Bab, and finally from northeastern Syria.

The Syrian side pressed Turkey to fulfill the commitments it made on Idlib under the Sochi deal with Russia, especially in terms of reining in rebel groups in the province, fighting the al-Qaeda-linked Hayat Tahrir al-Sham and unblocking the Aleppo-Latakia and Aleppo-Hama highways. This suggests that Damascus’ primary demand from Ankara is to evacuate its military outposts at Morek, Maarat al-Numan, Arima, al-Surman and Tell Touqan in southern Idlib.

When it comes to Turkey’s position at the meeting, the Turkish side conveyed the following main points:

Although Ankara’s outbursts against the Assad regime may continue, the meeting could be deemed the beginning of a new phase, in which Turkey accepts Damascus as an interlocutor after almost nine years of ignoring it as an enemy. Bilateral ties are likely to improve via contacts between intelligence and security officials. Besides the Idlib issue and the withdrawal of Turkish troops, complex problems such as the status of the Turkish-backed Syrian National Army and the YPG require solutions as well, boding tough negotiations in the coming period.

Could this first step toward normalization lead to a meeting between Erdogan and Assad?

Assad said in a December interview that he would meet with Erdogan if such a meeting served the interests of Syria.

A meeting between the two leaders appears unlikely in 2020, but the changing tone of the Turkish media and the talk in Ankara’s political corridors suggest the government is weighing the revival of ties with Syria as well as Egypt and Israel. Turkish ambassadors are absent from all three countries at present. The widely shared assessment that those diplomatic ruptures have deepened Turkey’s isolation in the eastern Mediterranean has finally reached Erdogan’s palace.

The fact that the issues of Libya and Syria came up simultaneously in Moscow indicates that Russia expects Turkey to cede control in Idlib to Assad’s forces in return for Russian efforts to curb Khalifa Hifter’s forces in Libya, where Turkey backs the Tripoli-based government. In an intriguing pattern, seen in Libya as well, Turkish moves in the Middle East have resulted in Russia chalking up points on its own scoreboard. Syria has been no exception.

After Turkey’s Operation Peace Spring on the eastern side of the Euphrates in October, Ankara and Moscow agreed that YPG-controlled areas evacuated by the United States would come under the control of the Assad regime. Yet the regime failed to accomplish that process. While Russia took over the bases that the Pentagon had established in northern Syria, the regime’s bargaining with the YPG proved inconclusive.

In Idlib, meanwhile, the Russian-backed regime forces intensified their ground offensive, recapturing about 40 towns to reach Maarat al-Numan, a symbol of the Syrian uprising. As heavy bombings by Russian jets drove hundreds of thousands of people to the Turkish border, the Putin-Erdogan summit resulted in a cease-fire last week. Yet air raids and clashes in Idlib continue.

For sure, Maarat al-Numan, the key town on the M5 highway between Aleppo and Damascus, bears little significance for Ankara now that it has ventured into energy wars in Libya and the eastern Mediterranean. Nevertheless, Ankara has defied Moscow’s expectations in Idlib so far, still reluctant to evacuate its outposts in Morek, al-Surman and Tell Touqan, which are already under regime control, and its bases at Arima and Maarat al-Numan, which are in close proximity to the ongoing clashes.

Will Turkey hand Idlib over to the regime in return for a halt of Hifter’s advance on Tripoli? The answer, it seems, will not require a long wait. In any case, Ankara appears increasingly willing to give up its territorial claims in northern Syria and seek Damascus’ support in curbing the YPG and its military collaboration with the United States.

The five outposts in southern Idlib stand out in the ongoing arm-wrestling between Ankara and Damascus. A continued presence of Turkish troops indicates that Ankara still has the stronger hand, and if the troops leave, it means Damascus is gaining the upper hand.