Congress has a plan to restore some of the Palestinian aid that President Donald Trump eliminated. 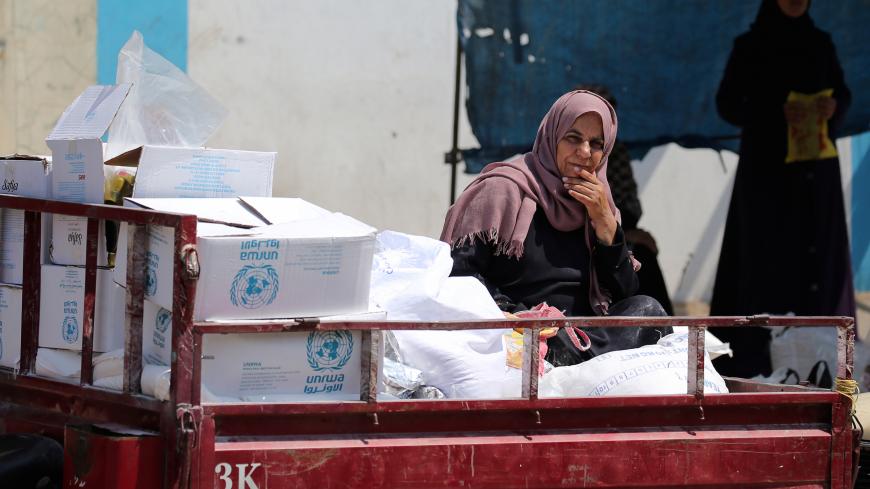 A Palestinian woman sits in a motorized vehicle loaded with aid, outside a distribution center run by the United Nations Relief and Works Agency, in Khan Yunis in the southern Gaza Strip, Sept. 4, 2018. - REUTERS/Ibraheem Abu Mustafa

President Donald Trump is expected to sign a government funding bill today that would force him to restore a portion of the humanitarian and economic assistance he eliminated for Palestine.

The compromise spending legislation would only restore approximately one-third of the annual economic and humanitarian aid that the United States had provided to the West Bank and Gaza prior to Trump’s 2018 decision to eliminate it. However, the spending package also includes new restrictions limiting Trump’s ability to divert assistance to other countries, as he did last year when the State Department reprogrammed $215 million in Palestinian economic aid.

The foreign aid spending legislation, which passed the House 207-120 and the Senate 71-23 this week, includes $75 million in humanitarian and economic aid for the West Bank and Gaza alongside another $75 million for security aid to support the Palestinian Authority (PA). The $150 million in Palestinian aid comes as Congress snubbed the White House’s request to provide $175 million in funding for Trump’s long-stalled Palestinian-Israeli peace plan.

To ensure that Trump does not reprogram that aid elsewhere, it also includes a provision that prohibits him from diverting more than 10% of aid allocated to any other country. This ensures that the Trump administration will not be able to entirely eliminate Palestinian aid, as he did last year.

When Trump reprogrammed the $215 million in Palestinian aid, he also reprogrammed $230 million in Syrian stabilization aid last year after getting Arab Gulf states to pledge to pick up the tab.

Trump faced further bipartisan pushback on Capitol Hill after he reprogrammed aid to three Central American countries earlier this year. The president’s decision to hold up military aid to Ukraine earlier this year also prompted the House to impeach him this week, accusing him of withholding the assistance to force Kyiv to investigate former Vice President Joe Biden’s son’s business activities in the country.

The Trump administration also failed to notify Congress when it temporarily held up military and economic aid to Lebanon earlier this year at the behest of anti-Hezbollah hawks in the White House.

Politico also reported in September that the Trump administration is conducting a foreign aid review to prioritize assistance to countries that support US policy goals and to potentially penalize states that vote against Israel at the United Nations.

Although the new restrictions on foreign assistance diversion are intended to protect most recipient countries from the whims of the executive branch, Congress must still clear one last self-imposed hurdle before it resumes aid to Palestine.

Lawmakers dug themselves into a deeper hole last year by passing an anti-terrorism law that resulted in the inadvertent end of US aid to the West Bank and Gaza, including the security assistance favored by the PA and Israel alike.

The Anti-Terrorism Clarification Act opens the PA up to potentially ruinous terrorism-related lawsuits if it accepts any US assistance, which prompted the Palestinians to reject the last vestiges of US aid earlier this year. The congressional report accompanying the foreign aid bill notes that the Palestinian assistance “shall be made available if the Anti-Terrorism Clarification Act of 2018 is amended to allow for their obligation.”

Both the House and the Senate have advanced competing amendments to the law. Both versions would take the legal liability off the PA if they accept US aid, but the Senate version does create several other stringent conditions to open the PA up to terrorism-related damages.

While most of Trump’s aid cuts have faced overwhelming bipartisan opposition, many congressional Republicans share the White House’s aversion to humanitarian and economic aid for Palestinians.

Tellingly, House Democrats had initially sought to allocate nearly $227 million in multilateral economic and development aid for the West Bank and Gaza, a level that more closely tracks with previous administrations.

And while the security aid is less popular with the general Palestinian public, it enjoys more support from Republicans as it allows Israel and the PA to coordinate activities that help crack down on Hamas and Islamic Jihad in the West Bank. The State Department had requested $35 million in security aid for the PA this year, but no other Palestinian aid.