The Turkish president is maintaining his hard line, which indicates that Ankara’s ties with the international community will remain strained. 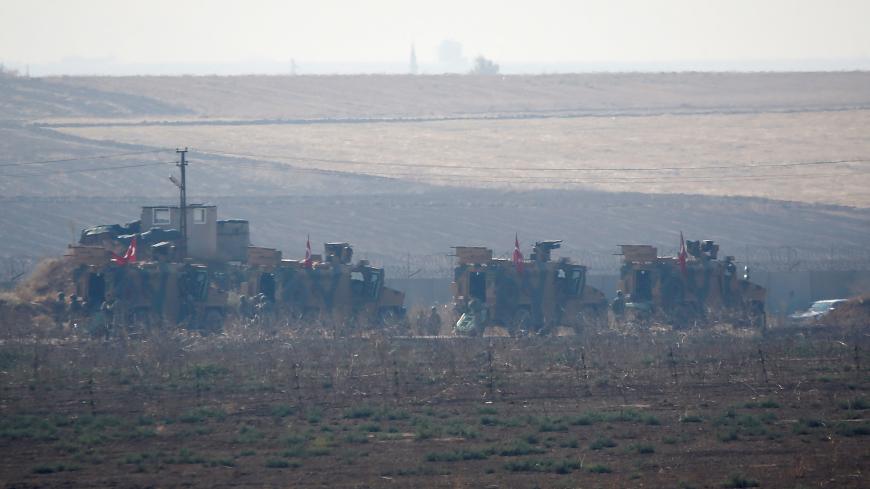 Turkish military vehicles arrive at the Turkish-Syrian border before a joint Turkish-Russian patrol in northeast Syria, near the Turkish border town of Kiziltepe in Mardin province, Turkey, Nov. 1, 2019. - REUTERS/Kemal Aslan

The cost of Turkey’s Operation Peace Spring in northeastern Syria against the People's Protection Units (YPG) is growing fast for Ankara.

The operation secured political points for President Recep Tayyip Erdogan at home, where the mood is increasingly nationalistic, and achieved some of Turkey’s objectives east of the Euphrates River. On aggregate, though, Turkey’s gains could be minor when compared to the unprecedented international isolation it now faces.

Ordering the operation against the US-backed Kurdish YPG, which Turkey considers a terrorist organization, may turn out to be the easy part. Managing the political and economic fallout will likely prove more difficult.

The US House of Representatives has already passed a bipartisan bill that threatens Turkey with economic, political and military sanctions, while the Senate is drafting similar bills.

The ugly mood in Congress against Turkey also enabled the passage of a resolution designating the 1915 killing of Armenians under Ottoman rule as genocide. Turkey traditionally rejects any claim of genocide perpetrated against the Armenians.

Using its strategic value as a US ally, Ankara managed to prevent such resolutions for over three decades. That clearly doesn’t apply anymore.

According to Omer Taspinar, a senior fellow at the Brookings Institution, the American national security establishment no longer considers Turkey an ally.

“Anti-Turkish sentiment is mounting, not only because of Erdogan’s invasion and reports of war crimes, but also because of Ankara’s acquisition of the Russian S-400 missile-defense system,” Taspinar wrote in an article for the Syndication Bureau.

Egypt and Saudi Arabia issued their own strong condemnations of Turkey. Turkey also failed to get support from China and Iran even though it hopes to expand ties with them.

None of this has fazed Erdogan, though. He is happy that he has become, in the eyes of his domestic supporters, a leader who is capable of carrying out his promises, no matter how high the stakes. He also has something to show for it.

The green lights he secured from Donald Trump and Vladimir Putin enabled him to expel the YPG from regions adjoining the Turkish border. It also diminished Kurdish aspirations for self-rule in northern Syria.

Contrary to what Arab countries say, Ankara does not see itself as an occupying power in Syria. It sees itself as the guarantor of the country’s territorial integrity against designs — such as those harbored by the Kurds — to carve out “statelets” from Syrian lands.

Meanwhile, Turkey gained a military foothold east of the Euphrates River, even though the territory it captured — measuring 120 kilometers long and 33 kilometers deep — is smaller than the “safe zone” it envisaged for settling hundreds of thousands of Syrian refugees.

These relative gains, however, have come at the expense of tarnishing Turkey’s international image. This will take time, and much convincing by diplomatic means, to repair.

The problem is that Erdogan relies on hard-ball tactics rather than diplomacy in his dealings with the world. True to form, he has been unrestrained in his criticism of the international outcry over Turkey’s operation.

Addressing local representatives of his Justice and Development Party (AKP) a day after ordering the operation, he maintained his hard and uncompromising line. He was particularly vitriolic with regard to Saudi Arabia and Egypt.

“Saudi Arabia should look in the mirror. Who is it that brought Yemen to where it is today?” Erdogan said. “Riyadh, you should account for this before blaming Turkey.”

Erdogan accused Egyptian President Abdel Fattah al-Sisi of “killing democracy” by ousting President Mohammed Morsi and eventually causing his death. “That is the kind of murderer you are,” Erdogan said.

Turning to Europe, Erdogan threatened to open the doors and release hundreds of thousands of Syrian refugees to European countries if they accused Turkey of occupying Syrian lands.

European Commission President Jean-Claude Juncker had demanded that Turkey halt its operation and said the EU would not pay for any safe zone for refugees created by Turkey in northern Syria.

Retired Brig. Gen. Naim Baburoglu underlined the lack of trust between Turkey and its Western allies. He pointed to the fact that the United States, when it withdrew from Syria, turned over its bases east of the Euphrates to Russia, not Turkey.

“The handing of [these bases] to Russia instead of NATO member Turkey is an important development that has to be dwelled on,” Baburoglu wrote in Gercek Gundem.

He went on to argue that Turkey’s operation revealed the dimensions of the international front facing Ankara. “When we consider existing threats in the eastern Mediterranean, the lesson to be drawn from is that Turkey needs much more support,” Baburoglu wrote.

The reportedly minimal cooperation between Turkey and the United States in the tracking down and killing of Islamic State leader Abu Bakr al-Baghdadi, only a stone’s throw from the Turkish border with Syria, may also signal the growing distrust between Turkey and its principal NATO ally.

Analysts say that by using a base in northern Iraq, rather than its extensive assets in Turkey, Washington intended to show that it could carry out these operations without relying on Turkey.

Analysts also refer to news reports stating that Washington is spending vast amounts of money to upgrade its al-Udeid base in Qatar while concluding fresh accords for new military facilities in the region, most notably in Greece, Bulgaria and Romania.

The growing lack of trust in NATO in Turkey is the other side of the coin. Most Turks believe the United States and NATO are Turkey’s greatest enemies and would prefer to side with Russia and China.

Erdogan also underlined this lack of trust in his address to regional AKP representatives. He argued that NATO had chosen to remain silent and inactive when Turkey was being attacked by terrorists. He recalled that the alliance’s charter states that it will help any member whose security is threatened.

Given this backdrop, Russia’s support is becoming increasingly vital for Ankara, but this relationship still has not undergone some vital stress tests that would confirm a “strategic relationship” is in the making.

Ankara and Moscow remain at odds over a host of issues: Cyprus, Crimea, Chechnya, Ukraine. When it comes to Syria, it is not evident they are on the same page on key points.

Given its need to maintain good ties with Moscow, Ankara hardly mentions that Russia is also in close contact with the YPG leadership and supports cultural autonomy for the Syrian Kurds.

Turkey may have rolled the YPG back in northern Syria, but its operation has turned a sympathetic international spotlight on the Kurds in a manner not seen before. Ankara will have to convince international public opinion that its fight is not with the Kurds, but with terrorists.

This will clearly be an uphill battle.

Former AKP deputy Mehmet Ocaktan, who now criticizes the Erdogan government, believes Turkey has itself to blame for this situation.

“Had we had come up with joint policies with the Syrian Kurds at the start of the fight against the Islamic State … we would be their protectors today,” Ocaktan wrote in a column in daily Karar.

He recalled that despite initial objections, Turkey managed in the end to establish good ties with the Iraqi Kurds.

“It is not the end of the world if the Kurds establish autonomous structures in Iraq and Syria," he wrote. "The story in Syria is going to end the same because there is a Kurdish presence there and this is a fact.”