US President Donald Trump and his Turkish counterpart Recep Tayyip Erdogan met in Washington to rebuild US-Turkish relations without setting a clear path for progress. 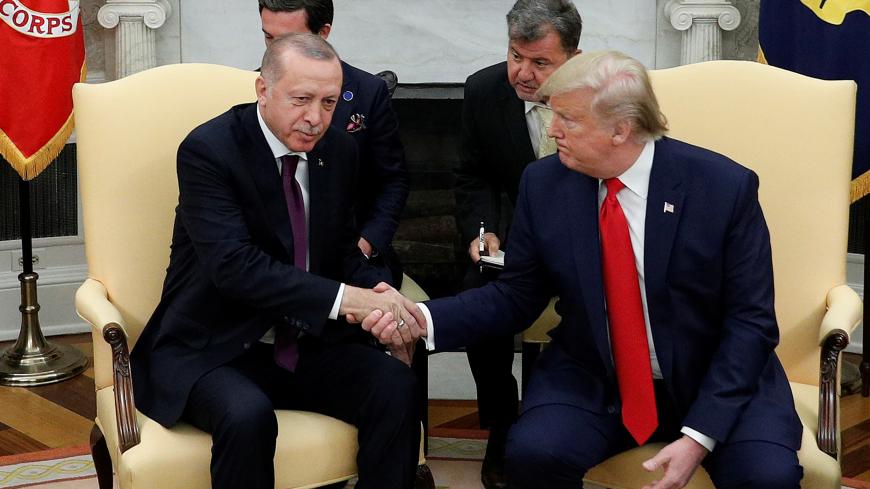 The much-anticipated meeting was their first since Turkey’s incursion into northeast Syria and though no new agreements were announced, the two presidents said they would work to restore strained US-Turkish relations.

“Turkey’s acquisition of sophisticated Russian military equipment, such as the S-400, creates some very serious challenges for us and we are talking about it constantly,” Trump said during a press conference following the meeting, saying his staff would work on resolving the S-400 issue.

Erdogan said Turkey remained a dedicated partner in the fight against terrorism and highlighted his nation’s role in hosting more than 3.6 million refugees. Before and after the press event, Trump also signaled he was open to expanding US-Turkey trade, stating the countries’ annual trade volume of $20 billion could reach $100 billion.

Asli Aydintasbas, a senior fellow at the European Council on Foreign Relations who wrote about the poor timing of the meeting in The Washington Post, said the event was a “huge win for Erdogan.”

Erdogan “has projected power at home and got a major audience in the US, including congressional Republican leaders and media,” Aydintasbas told Al-Monitor. “Erdogan was able to reiterate some of his key talking points, such as YPG being terrorists,” she added, using the initials for the majority-Kurdish People’s Protection Units in northeast Syria.

US support of Kurdish forces in the region, which include the YPG, in military operations to eradicate Islamic State fighters has long been seen as a security threat by officials in Ankara, putting pressure on bilateral relations since 2014, when the arrangement began.

After meeting with Trump and his wife, Melania, Erdogan met with a small group of Republican senators. Florida Sen. Rick Scott participated and tweeted his questions for the Turkish leader prior to the meeting, in which he indicated he would inquire about Turkey’s commitment to the NATO alliance and Ankara’s relations with Moscow.

A key point of discord in US-Turkish relations stems from Ankara’s acquisition of Russian-made S-400 missile defense systems earlier this year in violation of US sanctions. The purchase led to Turkey's expulsion from the F-35 fighter jet program in July, as US lawmakers cited potential security breaches in Turkey’s plans to operate both NATO and Russian military equipment simultaneously.

Aydintasbas said the “S-400 issue is still at the forefront of the relationship, albeit with less tension. Clearly there is a US offer on the table and Erdogan is biding his time, trying not to make this an either/or game between the US and Russia.”

The meeting took place as US-Turkey relations face some of their most significant challenges to date. Though the presidents share an affinity for one another, sometimes dubbed a 'bromance,' US Congress members have been less charitable about the Turkish government’s policies in recent years, as flawed elections and military campaigns have drawn a growing chorus of criticism regarding Erdogan’s 17-year hold on power.

"The purpose of this meeting is to have an American civics lesson for our friends in Turkey,” Sen. Lindsey Graham, R-S.C., said at the same Oval Office press event. “And there’s a pony in there somewhere if we can find it."

Anti-Turkey fervor has notably spiked on Capitol Hill following an Oct. 6 phone call between Trump and Erdogan, in which Trump agreed to pull back American troops in northeast Syria, facilitating a Turkish incursion to expel US-backed Kurdish militants in the region and create a so-called "safe zone" for up to 2 million Syrian refugees currently in Turkey.

In an effort to restrain the Turkish incursion, US lawmakers introduced a myriad of bills that could sanction Turkish officials, the nation’s economy and banking sector and prohibit US arms transfers to Turkey that could be used in Syria. Going a step further, a large majority in the House of Representatives voted Oct. 29 in favor of a nonbinding resolution recognizing the mass killings of Armenians between 1915 and 1923 as a genocide for the first time, drawing rebuke from Erdogan during the press conference.

“Some historical developments and accusations are being used in order to dynamite our reciprocal and bilateral relations,” Erdogan said today. “Especially in the House of Representatives, some of the resolutions that were passed on Oct. 29 served this very purpose,” which, he said, “deeply hurt the Turkish nation.”

He added, “The decision-makers in an incident that took place over 100 years ago should not be politicians, but historians.”

Despite the discord, a shaky cease-fire has since been implemented in northeast Syria following agreements between Turkey, Russia and the United States, but occasional clashes between armed forces in the region threaten to undermine the drawdown.

At the same time, Turkish officials have grown frustrated with the task of handling Islamic State foreign fighters captured in Turkey and Syria. More than 200 militants are in Turkish custody indefinitely after their home countries revoked many of their passports.

Saying that Turkey was “not a hotel” for IS militants, Interior Minister Suleyman Soylu said Ankara would start retuning foreign fighters to their nations and initial repatriations began Monday. The move led to the deportation of one American fighter to Greece, which did not grant him entry, leaving the man stuck between border gates at the Turkish-Greek border.

The developments come as infringements on human rights and democratic norms continue to make headlines in Turkey. One of Turkey’s most prominent prosecuted journalists, Ahmet Altan, was rearrested Tuesday, a little over a week after being released from prison. Having served three years in pretrial detention on terror-related charges based on his journalistic work, Altan was released with a travel ban Nov. 4.

This week, a new judge appointed to Altan’s case ordered his rearrest, saying the 69-year-old journalist and novelist posed a flight risk as he still faces a 10-year, six-month prison sentence. The decision drew condemnation from human rights groups as well as European officials, who said Altan’s detention highlighted ongoing pressure on press freedoms in Turkey — the world’s leading jailer of journalists.

“It appears that Ahmet Altan’s journalistic activities are perceived as quite scary,” Figen Calikusu, Altan’s lawyer, told Al-Monitor. “There’s no toleration for thought. There’s no legal explanation for whatever is happening right now. We are being torn away from law itself.”

Members of the minority rights-focused HDP continue to face accusations of fostering close ties with the Kurdistan Workers Party (PKK), a designated terror group at war with the Turkish state since the 1980s. Former HDP leaders Selahattin Demirtas and Figen Yuksekdag have been jailed since November 2016 as prosecutions have implicated dozens of party members, staff and supporters.

The senators announced the measure alongside Boston Celtics basketball player Enes Kanter, who has an extradition request against him for openly supporting US-based cleric Fethullah Gulen — an exiled Turkish religious figure accused of fomenting a coup attempt in 2016.

“President Trump has shown time and time again that he will cozy up to authoritarian rulers,” Markey said during a press conference Tuesday. “He should … make it clear that Turkey’s record on human rights is unacceptable.”

Markey said more than 80,000 Turkish citizens have been arrested or imprisoned, and more 1,500 nongovernmental organizations have been shuttered for terror-related allegations since the failed coup.