Life is gradually returning to Tell Abyad after the Turkish-backed Free Syrian Army took control of the city from Kurdish forces. 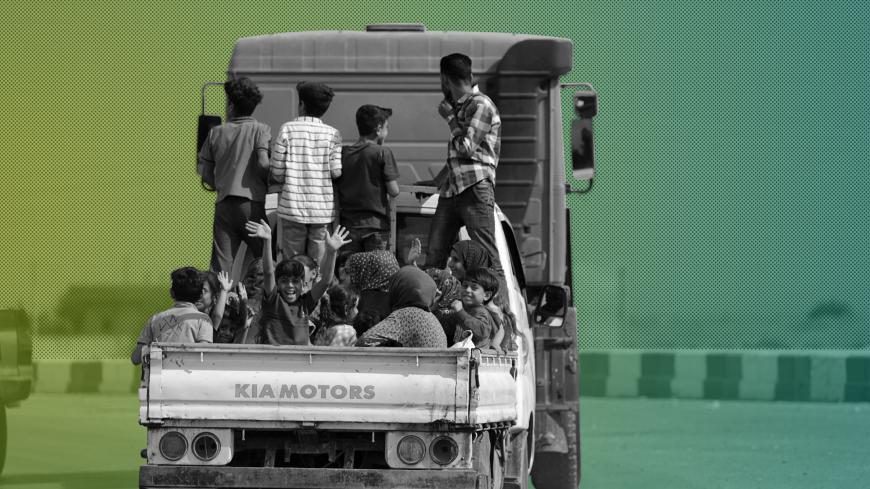 People ride on the back of a truck in the border town of Tell Abyad, Syria, Oct. 14, 2019. - REUTERS/Khalil Ashawi

A burst of violence on Nov. 2 shook a downtown market in Tell Abyad when a car bomb exploded, killing at least 16 people and wounding 20. Tell Abyad, strategically located in the center of the border with Turkey in northeastern Syria, had been one of Turkey's main targets during the invasion. No group claimed responsibility for the bomb attack.

FSA media coordinator Yahya Mayo, told Al-Monitor, “The victims are civilians. They are sidewalk vendors, shoppers and shopkeepers. They are poor. The cause of the high death toll is because citizens who were displaced when Operation Peace Spring was launched started to return since Oct. 13. Those who were behind the attack do not want the NA to succeed in managing Tell Abyad, so they are carrying out terrorist attacks to scare civilians.”

Wael al-Hamdo, head of Tell Abyad’s local council, remarked to Al-Monitor, “We will cooperate with the NA to secure Tell Abyad by erecting checkpoints. We are responsible for protecting people’s lives.”

Hussein Nasser, an activist from Aleppo's northern countryside who now lives in Tell Abyad, told Al-Monitor, “The Tell Abyad markets have regained their activity after the military operations. Trade in the city markets looks good. Residents are buying their bread from the city’s bakeries, which recently reopened. The people of Tell Abyad seem cautiously optimistic after the fighting stopped in the city and its immediate surroundings, and basic services gradually started to return. They are waiting for the newly established city council to provide public services. But security concerns persist, and the people hope that the FSA's NA will assume its security responsibilities to prevent bombings.”

The population in Tell Abyad is mixed, with an Arab majority and Kurdish, Turkmen and Armenian minorities. The YPG had taken control of Tell Abyad after the Islamic State (IS) withdrew from the city in June 2015. During the Turkish offensive, the Kurdish forces retreated after coming under siege on three sides. The head of the media office of the Tell Abyad local council told Al-Monitor that the number of people in the city before the Turkish invasion stood at about 40,000. Some 70% of them fled during the fighting, which, Hamoud said, was mainly on the outskirts. The population is currently estimated at about 35,000.

NA spokesman Maj. Yusuf Hamoud told Al-Monitor, “The NA has secured the safe return of displaced people to their homes in Tell Abyad, as it handled their arrival and provided transportation and assistance. The city markets opened a few days after the NA took control. Bakeries are operating again and drinking water is back to the city. Things are heading toward stability in the city, and we are witnessing improvement at all social, service and relief levels.”

When the NA arrived in the city, services were almost nonexistent because workers had left their posts during the fighting, and some service infrastructure suffered partial damage in the ground battles.

Hamoud said the NA is exerting great efforts to address the security issue and prevent attacks similar to the car bomb. He also asserted that the YPG had planted landmines and explosives at the sites they withdrew from, including its headquarters and on the outskirts of the towns it controlled. Citing the munitions' threat to civilians, Hamoud said engineering teams had been working to clear them since mid-October.

NA leaders, according to Hamoud, had met on several occasions with local noblemen and held sessions to facilitate the safe return of displaced families and provide assistance to them. They also discussed the selection of members of the local council created Oct. 27 under the supervision of the Ministry of Local Affairs affiliated with the so-called Syrian Interim Government.

Mohammed Jarrah, a resident of Tell Abyad, told Al-Monitor, “Despite the YPG’s withdrawal, anxiety and fear remain. People here fear bombings and suicide attacks will continue in response to the NA’s takeover of the city. I have relatives who have fled to Raqqa and are afraid to return in light of the deteriorating security situation.”

Abdullah Ibrahim, a resident who returned to the city after two weeks, told Al-Monitor, “Although it was not a long journey, it was a cruel one. I hope that basic services will return to the city as soon as possible and that schools will open their doors to our children. We want good security conditions so that we can resume our lives normally.”