Some US forces to remain in northeastern Syria, SDF sources say

Residual US forces will remain inside Syria despite President Donald Trump's Monday announcement that an estimated 1,000 US service members would be withdrawn from the Kurdish-controlled zone, Kurdish sources told Al-Monitor. 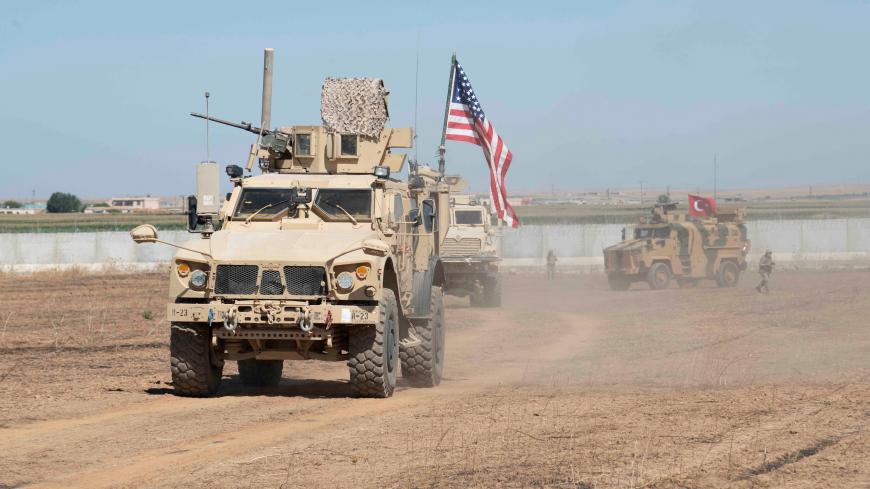 US and Turkish military forces conduct a joint ground patrol inside the security mechanism area in northeast, Syria, Sept. 8, 2019. -

Residual US forces will remain inside northeast Syria even after President Donald Trump formally announced yesterday that an estimated 1,000 US service members would be withdrawn from the Kurdish-controlled zone, sources linked to the US-backed Syrian Democratic Forces (SDF) told Al-Monitor today. At least three sources said that “some” US forces would redeploy southeast of the town of Manbij. One of the sources said they would be stationed around the Tishreen Dam. The claim could not be independently confirmed.

Reports of a redeployment follow the first-ever telephone call between Trump and SDF commander Mazlum Kobane. The sources did not elaborate on whether Trump had signed off on a residual force in that conversation. But a source close to Kobane said that after the phone call, “He sounded more relaxed than he has in the past days."

The Pentagon has been viscerally opposed to a withdrawal, which many DoD officials have privately lashed out against as a betrayal of the Kurds. It would hardly be surprising therefore that they would stay on — albeit in reduced numbers — for as long as they can.

The sources did not elaborate on the precise size of the US force or how long it's expected to remain. An SDF official speaking on condition of strict anonymity in order to discuss the matter freely said the presence of US forces in Tishreen, however brief, would help stave off putative moves by Syrian regime forces against the SDF coming from positions further south in Tabqa.

“Some US forces staying would be a positive development and depending on how long they stay it will allow the SDF to negotiate better terms with the regime,” the official said, adding that the SDF would provide protection for the US forces. “But none of this alters the fact that the situation on the ground has fundamentally changed since the Turkish invasion,” he told Al-Monitor.

“Russia is now the real boss,” he added. The official would not confirm, however, whether a residual US force was redeploying to the Tishreen Dam.

Aaron Stein, the director of the Middle East Program of the Philadelphia-based Foreign Policy Research Institute who has closely monitored the eight-year Syrian conflict, concurred. “This ends with the regime back on every border. Now how that happens is a matter of sequencing. But now that the Americans are out of the way — Turkey has succeeded — now they will have to negotiate with the Russians and they are not going to get a very good deal," he told Al-Monitor.

The Syrian Kurds are now increasingly dependent on the Russians as well. The SDF announced a deal on Sunday with the Syrian government for military help to keep Turkey at bay. This saw Syrian regime troops enter Manbij alongside Russian military police who were already deployed nearby in Arima. Russia’s Defense Ministry said that its men were patrolling “along the line of contact between the Syrian Arab Republic and Turkey” and that it was also “interacting with the Turkish government.”

The SDF official confirmed that Russian military police were patrolling the area and the regime forces had deployed north of Manbij in Sajur. He said SDF forces had not ceded Manbij and remained in and around the area.

Col. Myles B. Caggins III, the spokesman for Operation Inherent Resolve, tweeted today, “Coalition forces are executing a deliberate withdrawal from northeast Syria. We are out of Manbij,” suggesting that Trump’s orders for a full withdrawal following Turkey’s military assault against the SDF are being carried out.

Caggins and other Pentagon officials did not respond to Al-Monitor’s request for comment.

Any such talks would mark a radical shift for Turkey, which led an unsuccessful campaign to topple Assad, arming and training opposition rebels of all stripes. Those same rebels are now battling the Kurds. Graphic images of the Turkish-backed forces committing atrocities against Syrian Kurdish fighters and civilians have provoked an international uproar. Turkey has called the allegations of abuse “terrorist propaganda” aimed at staining Turkey’s image.

Turkey's claims were given an inadvertent boost when ABC news footage of a video that was apparently taken at a gun range in Kentucky as it reported on Turkish attacks in Syria. The news channel issued an apology.

On Oct. 9, Turkish forces and their Syrian National Army allies moved against the SDF in and around the towns of Ras al-Ain and Tell Abdyad in what Washington labeled a unilateral move. On Monday the White House announced a set of sanctions against Turkey’s ministers of defense, energy and the interior over their role in the invasion and called for an immediate cease-fire. It said a delegation led by Vice President Mike Pence would be traveling to Ankara “soon” to discuss its terms.

Turkish forces have seized control of Tell Abyad, an Arab-majority town, but clashes were continuing today in Ras al-Ain, where the SDF is putting up fierce resistance.

Trump said in a statement, "Turkey’s military offensive is endangering civilians and threatening peace, security, and stability in the region. I have been perfectly clear with President Erdogan: Turkey’s action is precipitating a humanitarian crisis and setting conditions for possible war crimes.” Trump also noted, “A small footprint of United States forces will remain at [the] Tanf Garrison in southern Syria to continue to disrupt the remains of [the Islamic State]." The statement made no mention of a residual force staying in the northeast, saying US forces coming out of Syria would redeploy in the region.

Turkey has yet to formally respond to the US sanctions and it remains unclear whether Erdogan will travel to Washington on Nov. 13 as scheduled to meet with Trump. But Turkish Vice President Fuat Oktay told Sky News that Turkey was undeterred by the sanctions. “As Turkey, we are decisive and very determined to clear the area from terrorists no matter what happens,” he said.

In a separate telephone call with Erdogan late Monday, Trump reportedly extracted pledges from the Turkish leader that his forces would steer clear of the SDF chief’s native border town of Kobani. The town, which is of huge symbolic signficance to the Kurds, was besieged by IS forces in October 2014 as Turkey looked on. But when the United States intervened on their behalf for the first time, airdropping weapons, the siege was broken, marking the start of the US-Kurdish alliance against IS in northeast Syria.

Giran Ozcan is the Washington representative of the People's Democratic Party, the largest pro-Kurdish party in Turkey and openly sympathetic to the SDF. He said that regardless of whether US troops remained in northeast Syria, that “President Trump spoke over the telephone with a non-state actor, the SDF commander Mazlum Kobane” was “of tremendous significance” and a development that “the whole world needs to watch carefully.” Kobane, whose real name is Ferhat Abdi Sahin, was for many years part of the outlawed Kurdistan Workers Party, the militant group that has been waging an armed campaign against the Turkish state since 1984 and is on Turkey's most wanted list of "terrorists." But to US military commanders who worked with him over the past five years, Kobane is a trusted partner who helped defeat IS.