Ankara and its allies are warning that this week’s vote would "poison" the already strained bilateral relationship. 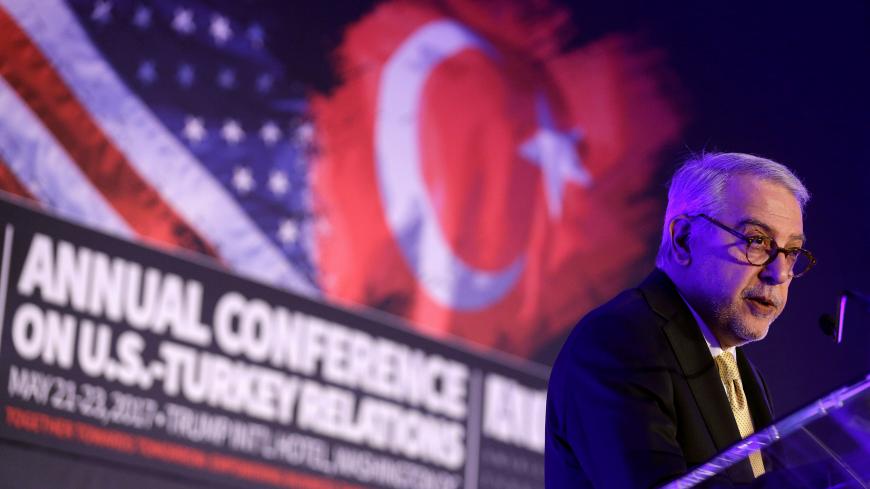 Turkish Ambassador to the United States Serdar Kilic speaks to the Conference on US-Turkey Relations in Washington, US, May 22, 2017. - REUTERS/Joshua Roberts

Ankara and its allies are warning Congress of the risk of “permanent negative resentment” between Turkey and the United States if House members go forward with plans to recognize the 1915 Armenian genocide this week.

On Friday, Turkish Ambassador to the United States Serdar Kilic wrote to lawmakers to warn them that voting for the “biased” resolution would only add to the growing number of disputes between the two countries. The House Rules Committee is scheduled to take up the nonbinding resolution tonight, setting up a floor vote as early as Tuesday as lawmakers seek to punish Turkey for its intervention against the Kurds in Syria.

The bipartisan resolution recognizes the massacre of more than 1 million mostly Christian Armenians in the waning days of the Ottoman Empire as a genocide. According to Kilic, the bill “will considerably poison the political environment between Turkey and the United States, at a time when regional and international developments require extensive collaboration and cooperation between our two countries more than ever before.”

Kilic’s letter was published on Twitter by the Washington-based Armenian National Committee of America (ANCA), which has long lobbied in favor of the resolution. The leaked letter was originally distributed to lawmakers by Venable, one of the six lobbying and public relations firms registered to work for the Turkish government.

Turkey has also been able to count on several Turkish-American groups to make its case. The Assembly of Turkish American Associations (ATAA) and Turkish American National Steering Committee (TASC), two US-based organizations with thousands of members, blasted out emails urging their members to contact lawmakers.

“We have only two choices,” ATAA wrote. “We can be passive and allow these allegations to go on, or we can stand up and defend ourselves, our history, and the future of our children here in the United States.” The email goes on to accuse “extremists” in the Armenian diaspora of hijacking the will of the Armenian people; the Armenian government, however, publicly supports the “international recognition and condemnation of the Armenian Genocide.”

The bill comes at a perilous time for US-Turkey relations, which have notably suffered from Turkey’s decision to purchase air defense missiles from Russia, and the United States’ refusal to extradite exiled cleric Fethullah Gulen, whom Turkey blames for the failed 2016 coup.

Following Ankara’s incursion into northern Syria earlier this month, bipartisan backlash has been swift. In addition to the genocide bill, the House is also expected to vote on new sanctions on the NATO ally this week, while pending annual defense legislation would lift an arms embargo on Cyprus, to the delight of Turkey rival Greece.

"While emotions run high,” TASC wrote in their email, House leaders are “manipulating the circumstances to introduce H.Res.296 for a floor vote soon.”

On the other side of the issue, the Armenians can count on a loose alliance of Christian and Jewish groups to make their case.

ANCA has been among the most vocal advocates of the bill, mounting a Capitol Hill lobbying push in recent days as frustrated lawmakers take on a bevy of measures aimed at Turkey. Genocide recognition, ANCA Executive Director Aram Hamparian said in a statement, “is especially timely today, as Turkey commits new crimes against our Kurdish allies and at-risk Christian and Yezidi civilians across northern Syria.”

The Anti-Defamation League endorsed the resolution today, with ADL President Jonathan Greenblatt saying in a statement that “remembering and educating about any genocide — Armenian, the Holocaust, Bosnia, Rwanda, and others — is a necessary tool to prevent future tragedies and begins with recognition.” In Defense of Christians, meanwhile, has actively lobbied for the resolution.

The State Department has declined to comment on the resolution but has raised concerns that calling the massacre a genocide would harm bilateral relations. A spokeswoman told the Wall Street Journal that the 1915 events constituted “one of the worst mass atrocities of the 20th century.” The White House isn’t wading into the controversy, since the simple House resolution doesn’t go to the president for his signature.