Turkey launches attack on Syrian Kurdish forces as US steps aside

Turkey has begun its assault in northern Syria, testing the defenses of the Syrian Kurdish forces and the limits of US tolerance for an operation that the Pentagon has fiercely opposed. 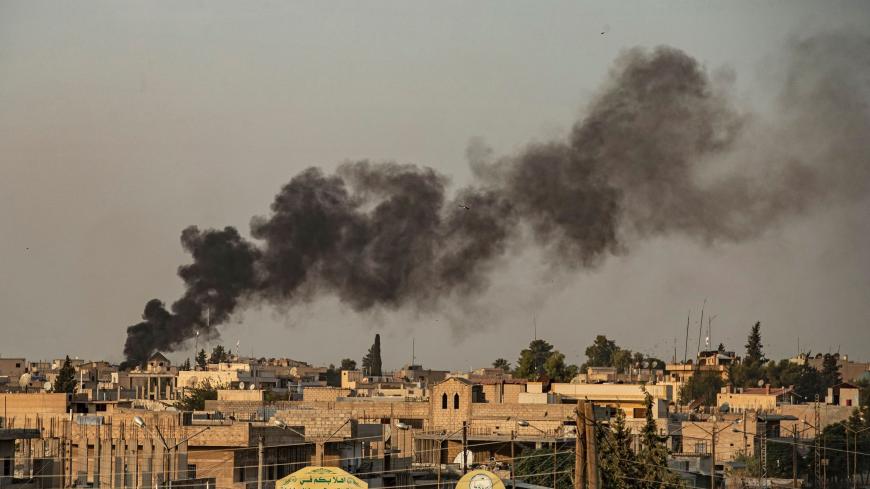 The Turkish Armed Forces launched a long heralded incursion against US-backed Syrian Kurdish forces in northern Syria today, upending a five-year status quo that saw the United States prioritize the campaign against the Islamic State over its relations with its NATO ally Turkey.

Turkish President Recep Tayyip Erdogan announced the news via Twitter, saying the operation, called “Springs of Peace,” was aimed “to prevent the creation of a terror corridor across our southern border.” The planned magnitude of the Turkish assault against the Syrian Kurdish Protection Units (YPG) operating under the umbrella of the Syrian Democratic Forces (SDF) remains unknown.

Initial reports suggested the Turkish assault backed by its Syrian Arab rebel partners called the “National Army” would be limited to an area between Ras al-Ain and the mainly Arab town of Tell Abyad after US forces pulled out of there following orders from President Donald Trump announced late Sunday.

SDF spokesman Mustafa Bali said that Turkish warplanes had attacked the region, creating “huge panic among people.” The SDF’s Coordination and Military Operations Center asserted via Twitter that the bombing was “intensive” and had caused civilian casualties, though it gave no details. Bali threatened Ankara with “a total war on the entire border in order to protect ourselves and our people” and said a general mobilization of the population had begun.

Turkish television showed plumes of smoke rising from Ras al-Ain, which was captured by the YPG in 2013 after a protracted fight against Free Syrian Army and jihadi forces that were backed by Turkey.

The Haberturk news channel reporting from near the Incirlik airbase in southeast Turkey also said that Turkish fighter jets were taking off to carry out airstrikes across the border. An SDF commander speaking on condition of anonymity via WhatsApp said the Turkish jets had struck rural areas lying between the two towns. There were also reports that Turkish jets had hit further south in Ain Issa, where the SDF commander Mazlum Kobane is usually based alongside US special forces. That report could not be independently confirmed.

The SDF commander said the purpose was “to sow frenzy and fear” and accused the United States of misleading the SDF into believing that Turkish planes would be shut out of the airspace over the Kurdish-held zone.

The Turkish airstrikes will have been conducted above all to test the defenses of the YPG and the limits of US tolerance for an operation that the Pentagon has fiercely opposed. The Kurds call it a betrayal and a stab in the back. In an apparent gesture of solidarity with their Kurdish partners in arms, the Special Operations Joint Task Force Operation Inherent Resolve tweeted the hashtag #SDF but deleted the post, presumably after a slap on the wrist from the State Department.

The SDF commander said SDF forces were retaliating by shelling Turkish positions in the border towns of Nusaybin and Kilis, explaining, “We are in full offensive position, we were left with no other choice.” He said the SDF would likely review its alliance with the United States in light of the new developments but he did not elaborate. Meanwhile, SDF officials have said that, it [SDF] had effectively ceased operations against IS in order to confront Turkish aggression. The move is likely calculated to pressure the United States into halting the Turkish attacks.

According to local media outlets in northern Syria, panicked citizens were fleeing Tell Abyad toward Ain Issa and Kobani.

Western officials familiar with Turkish thinking said the aim was to occupy an area between the YPG-controlled town of Kobani and Ras al-Ain and to move some 30 kilometers (18 miles) south to the M4 highway, a critical artery. It would allow Turkish forces to disrupt the connections between the Kurds in Kobani, Manbij and Hassekah, said the sources, speaking not for attribution.

Turkey’s first direct intervention in August 2016 was also aimed at preventing the YPG from connecting the territories it holds east of the Euphrates with Jarablus, which lies west of the river. Then in January 2018, Turkish forces invaded the mainly Kurdish enclave of Afrin, all part of a concerted effort to deny the Kurds a contiguous zone that could sow the seeds of Turkey’s biggest nightmare, the emergence of a second Iraqi Kurdish-type quasi-independent entity along its border.

The commander said the timing of the operation was deliberate. It coincided with the 21st anniversary of the capture of Abdullah Ocalan, the leader of the Kurdistan Workers Party (PKK), the rebel group that has been fighting Turkey initially for independence and more recently for Kurdish autonomy inside Turkey. The PKK helped found and has staffed the YPG, which is why Turkey regards the US-backed militia as an enemy and has vowed to crush it.

Erdogan said a so-called safe zone to be carved out of northeastern territory will allow up to a quarter of the total 3.7 million Syrian refugees Turkey currently hosts to return.

Several thousand Arabs from Tell Abyad who fled to Turkey when the YPG seized the town from the Islamic State in 2015 have been wanting to go back. They have been unable to because many allegedly cooperated with IS against the Kurds. But the majority of the Arab population Erdogan wants to resettle in the Kurdish areas are thought to be from elsewhere in Syria, leading to charges that the real purpose is to thin out the Kurdish population.

European Commission President Jean-Claude Juncker asked Turkey to show restraint. Juncker said, “If the plan involves the creation of a so-called safe zone, don't expect the EU to pay for any of it." But Turkey could in turn threaten to unleash the Syria refugees on Europe in breach of a controversial 2016 deal under which it receives billions of euros to hold them in check.

Asli Aydinstasbas is a senior fellow at the European Center for Foreign Relations. She told Al-Monitor, “This could have been handled differently. There already was a process to establish a safe zone with joint patrols underway.” She was referring to a so-called security mechanism launched between Turkey and the Pentagon last month that allowed Turkish forces to inspect the Kurdish side of the border. The SDF dismantled its fortifications along the border and withdrew its heavy weapons in keeping with the deal, which was supposed to stop the Turks from coming in.

Pentagon officials are now claiming that Turkey used the mechanism to scout the area ahead of today’s incursion.

Aydintasbas said, “I worry the way this happened, a sloppy erratic decision-making process by President Trump will ruin any prospect of regional stability and of salvaging Turkey’s ties to the West.” The broader purpose of the security mechanism was to restore trust between the two NATO allies and steer Turkey away from Russia’s tightening embrace.

Erdogan spoke to his Russian counterpart Vladimir Putin to brief him on the operation today. In a readout of the conversation, the Kremlin said Putin “urged his Turkish partners to carefully consider the situation so as not to damage the overall efforts to resolve the Syrian crisis.”

SDF officials claim Turkey could not have proceeded with the operation without Russia’s blessings.

The SDF called on the United States to establish a no-fly zone over northeast Syria, presumably to replicate the safe haven created by US forces over northern and southern Iraq in 1991 to protect the Kurds and Shiites from Saddam Hussein’s wrath. This seems unlikely.

Trump has repeatedly aired his aversion to “endless wars” and wanted to pull out all US forces out of Syria in December. He relented when faced with an outcry from his generals. But despite the Central Command’s protracted efforts keep Turkish troops out, Erdogan’s sustained threats to invade northeastern Syria apparently wore down Trump’s resistance, paving the way for today’s assault.