The Psagot winery has hired a former US ambassador to the EU to lobby against “settlement” labeling regulations. 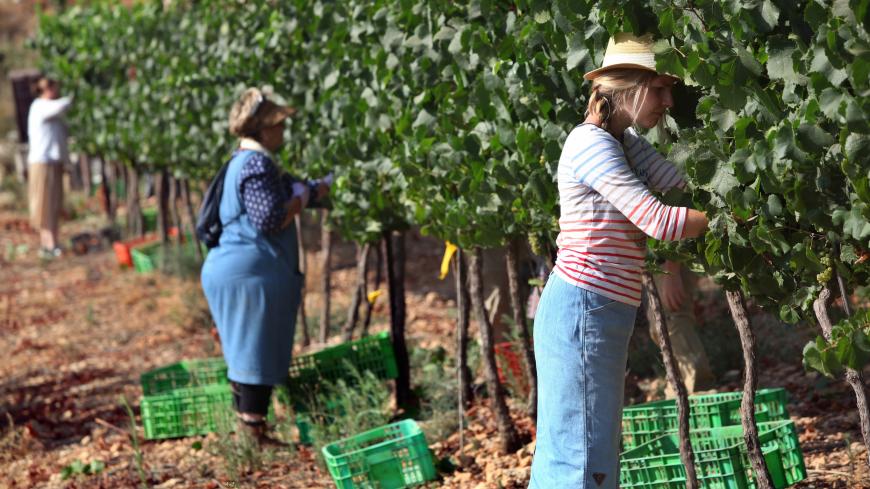 Evangelical Christian volunteers harvest Chardonnay grapes for Psagot Winery in a vineyard on July 24, 2017 in the Israeli settlement of Psagot in the West Bank. - David Silverman/Getty Images

An Israeli winery linked to the biggest donors to Prime Minister Benjamin Netanyahu has hired top lobbying talent to enlist the Donald Trump administration in a legal and political fight against the European Union.

The Psagot Winery in the West Bank settlement of the same name hired Covington and Burling in late September to battle pending EU regulations on country of origin labels, newly disclosed lobbying records show. The rules would require products from the West Bank and the Golan Heights to specify whether they were made in Israeli settlements, which critics say is discriminatory.

Covington’s registration simply states that the firm will provide “strategic advice and engagement” on the impact of the proposed regulations. But the lead lobbyist on the account, former US Ambassador to the EU Stuart Eizenstat, told Al-Monitor that the firm will make the case to US policymakers that the pending rules violate World Trade Organization regulations.

“I really can’t get into strategy, but I would just say that we think that the regulation violates WTO requirements, TBT (technical barriers to trade) regulations,” Eizenstat said. He added, “It’s not an appropriate use of regulations which were designed for safety and health food products, not for political products.”

The issue has ramifications far beyond wine sales in the European Union. While the winery was founded by Yaakov and Naama Berg, it is now majority-owned by Psagot Wine Inc., a Panamanian company run by the Falic family of Florida, owners of a duty free empire who have close ties to President Trump and other top Republicans.

Psagot Wine Inc. President Leon Falic did not respond to a request for comment. But company secretary Simon Falic has defended his family’s support for settlements deemed illegal under international law, telling The Associated Press, “The idea that the mere existence of Jewish life in any geographical area is an impediment to peace makes no sense to us.”

“It’s not an appropriate use of [WTO] regulations which were designed for safety and health food products, not for political products.” — Stuart Eizenstat, former US ambassador to the EU

The Falics have been Netanyahu’s biggest donors and have donated more than $5.6 million to settler groups in the West Bank and East Jerusalem, according to a recent Associated Press investigation. That piece called the winery “the centerpiece of the burgeoning settler tourism industry.”

The fight over the regulations began in 2015 when the European Commission — the EU’s executive branch —– issued an “interpretative notice” stating that products from settlements should be labeled as such. France followed suit with its own regulations the following year, which were challenged by Psagot and the European Jewish Organization.

The regulations remained on ice until June, when the advocate general for the European Court of Justice, Gerard Hogan, upheld the use of “Israeli settlement” labeling in a nonbinding opinion, declaring that “a violation of international law constitutes the kind of ethical consideration which the [EU] acknowledged as legitimate in the context of requiring country of origin information.” The court is set to rule on the issue Nov. 12 and is widely expected to uphold the EU regulations, thereby requiring all member countries to abide by them.

If past history is any indication, Covington should be able to count on bipartisan support for its efforts.

When the EU regulations first came out in 2015, Sen. Marco Rubio, R-Fla. — then a candidate for president —– called for “legal challenges to this politically motivated barrier to trade.” And both the House and Senate sent bipartisan letters to EU foreign policy chief Federica Mogherini calling the guidelines “unwarranted, dangerous, and damaging to the prospects of a negotiated solution to this conflict.” The 36 signers of the Senate letter included Democratic senators Cory Booker of New Jersey and Kirsten Gillibrand of New York, who both later became candidates for the 2020 Democratic presidential nomination (Gillibrand has since dropped out). Mogherini at the time pushed back in a letter first reported by Al-Monitor flatly rejecting accusations that the labeling requirements are in any way linked to the pro-Palestinian campaign to boycott Israel.

The Falics bring their own deep pockets and connections to the fight.

Each of the three brothers who own the ubiquitous Duty Free Americas airport chain donated $20,000 to the Republican National Committee on Election Day 2016. In February, they’ll be hosting their annual charity golf tournament at Trump’s Florida golf course for the third year in a row.

Huckabee operates Christian-themed tours of Israel and the West Bank and “never misses a chance” to visit the winery, according to a 2015 Washington Post article about the EU regulations’ impact. At the time, Yaakov Berg told the Post he thought the labeling rules would not hurt wine sales — and could even help.

US lawmakers have visited the Psagot winery on privately funded trips since at least 2014, when the conservative Israel Allies Foundation and the Tennessee-based Proclaiming Justice to the Nations brought Reps. David McKinley, R-W.Va., and Bill Johnson, R-Ohio, to the winery. There they heard Simon Falic and Naftali Bennett speak about “Israel at a crossroads.”

But the Falic brothers also have ties to Democrats. They each donated $2,700 to Hillary Clinton on Sept. 8, 2016, and donated a combined $10,500 to the Hillary Victory Fund on Election Day 2016. In March, the liberal Israel advocacy group J Street brought five Democratic lawmakers to the winery to meet Naama Berg.