After the United States withdrew troops from the Syrian-Turkish border this week, Turkey pulled the trigger on its offensive against Kurdish forces in northern Syria. 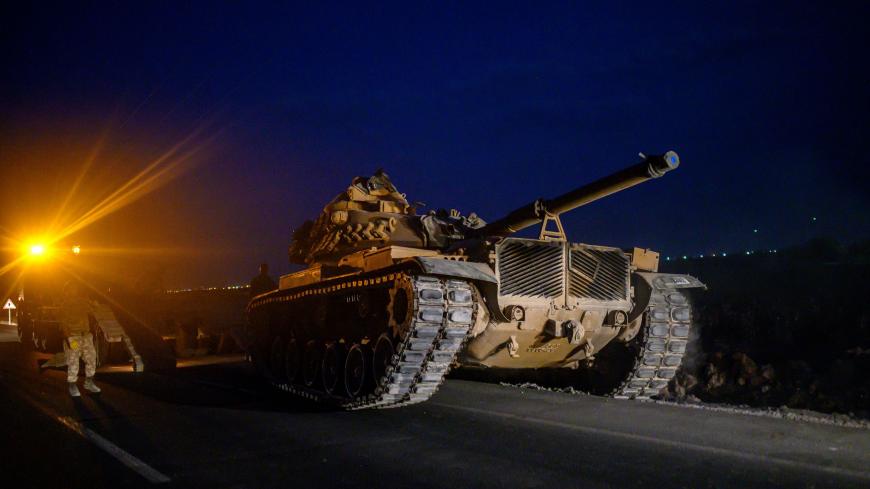 A Turkish army tank drives toward the border with Syria, near Akcakale, Turkey, Oct. 8, 2019. - BULENT KILIC/AFP via Getty Images

Turkey launched its invasion of Kurdish-controlled areas in northern Syria on Oct. 9, threatening to bring to life the fears of residents who spoke with Al-Monitor in the days before the operation began.

US troops evacuated two observation posts Oct. 7 in northern Syria, at Gire Spi/Tell Abyad and Sari Kani/Ras al-Ain. The move came after Turkish President Recep Tayyip Erdogan announced Oct. 5 that his country would carry out an air and ground assault east of the Euphrates.

The general command of the Syrian Democratic Forces (SDF) said in a statement after the withdrawal, “Despite our efforts to avoid any military escalation with Turkey and the flexibility we have shown ... to establish a border security mechanism and to fulfill our obligations in this regard, the US did not fulfill its obligations and withdrew its troops from the border areas with Turkey. Meanwhile, the latter is now preparing for an invasion of northern and eastern Syria.”

The SDF, a Kurdish-Arab alliance that until recently was supported by the US-led coalition against the Islamic State (IS), considers the US withdrawal and statements that it would not interfere in the Turkish operation a "stab in the back." US President Donald Trump appeared to backtrack somewhat from the noninterference statement, however, threatening to "obliterate" Turkey's economy if its forces do anything Trump considers "off limits."

Meanwhile, Trump said he had consulted all US allies before deciding to withdraw American troops, stressing that Britain was “very thrilled” by the decision. The UK denied Trump's claim, saying instead it was "very concerned" by Trump's apparently unilateral move, in which he essentially bypassed the Pentagon and the US Congress.

The decision also caused concern in Kurdish cities, as would be expected. Early this week, Al-Monitor spoke with some passers-by at a market in Qamishli near the Turkish border.

“We don't want war,” said Um Shirvan, 62. “We're concerned about Turkey's entry into Sari Kani/ Ras al-Ain because just one artillery [battery] can destroy hundreds of houses. We don't want to find ourselves on the streets; we want peace.”

Shirin, a citizen of al-Muabbada, told Al-Monitor, “Turkey makes threats every single day, so it's only natural for us to be afraid. However, the Democratic Union [Party, the PYD] should seek to calm things down and find ways out of this crisis, which it bears the bulk of. It has to enter into Kurdish-Kurdish understandings that could protect us from danger.”

The situation in Syria remains confusing for Kurds, as the United States has sent mixed signals. On Oct. 7, the Pentagon said in a statement that the United States would not support or participate in the imminent Turkish operation.

Political author Akram Hussein told Al-Monitor, “Things are not clear. There are conflicting US positions and statements."

In part, Hussein said, the troop withdrawal aims to distract from impeachment proceedings against Trump.

But he also said the withdrawal from Tel Arqam base, 5 kilometers (3 miles) west of Sari Kani, aims to “save Erdogan face, given his daily statements to the Turkish people [that he will] intervene and eliminate the Kurdistan Workers Party (PKK)," which Turkey and others consider a terrorist group.

“On the Kurdish level, [the US withdrawal aims at] pressuring the PYD and the SDF to achieve reform, such as removing non-Syrian elements and restructuring the [autonomous Kurdish] administration with the participation of components of the area, especially the Kurdish [National] Council.” The council is one of the blocs of the National Coalition for Syrian Revolutionary and Opposition Forces.

Meanwhile, Khalil Hamid, a citizen from Sari Kani, told Al-Monitor, “In the event of war, we will have to leave our homes.”

Hamid added, “I call on the PYD to abandon its policies that do not provide reassurances. For example, Erdogan argues that the PYD is part of the PKK, but instead of proving him wrong, PYD supporters take to the streets on the border with Turkey, raising PKK flags and pictures of its leaders. We do not want war. We have had it with all the bloodshed. We want to go to sleep without being afraid of not waking up.”

A makeup artist who said her name was Orkina told Al-Monitor before the invasion began, “[Turkey] has been making these threats since forever and we no longer know whether to take them seriously or not. If the Turkish invasion were to take place, we would endure major losses — be it in terms of migration or infrastructure. Shutting down the Semalka border crossing between us and Iraqi Kurdistan would disrupt trade and the movement of goods, coupled with price increases. Personally, a Turkish invasion would affect my work and I would not be able to receive the material needed for my beauty center. A war would put an end to all celebrations and this would affect all professions linked to such occasions.”

Abdul Baqi Darwish, a laboratory specialist, told Al-Monitor, “If the US truly withdraws, matters will get worse and more complicated. The US would lose the people’s trust and it would seem like a green light to Turkish intervention. Meanwhile, if the latter were to take place, it would have catastrophic repercussions and consequences, especially if Turkish-affiliated opposition factions intervene as well. This would cause a demographic change if the refugees are settled in the area, in addition to the panic that would prevail.”