US withdrawal created some opportunites for Russia but also had it face new challenges with Turkey. 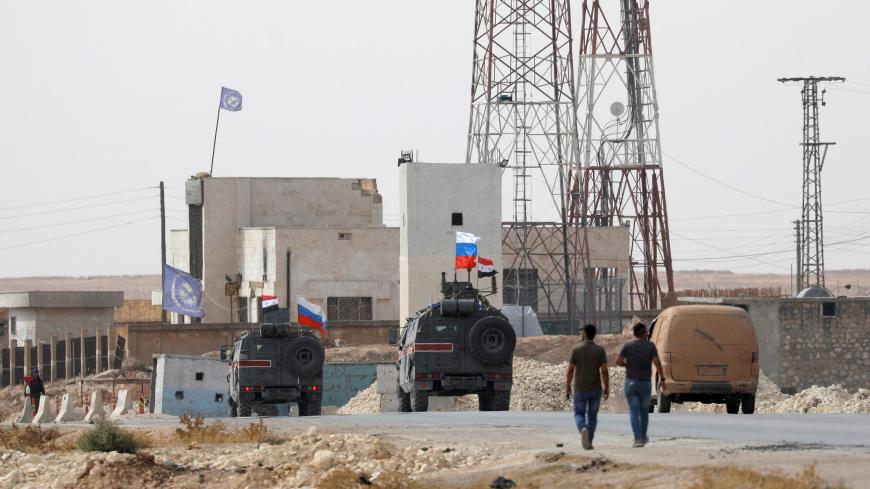 MOSCOW — On Oct. 15, the Russian Defense Ministry published two maps illustrating the situation in northern Syria following the withdrawal of US troops. They show Manbij, in Aleppo governorate, long under US and SDF control, now in the hands of Russian and Syrian forces. The Russia-backed Syrian army has also taken over some 400 square miles around the city that includes the Tabqa military airfield, three bridges (one of them a railroad bridge) across the Euphrates River, and two hydroelectric power plants.

Russians, presumably from private military contractors, are now operating in what used to be a US military post in Manbij. Russian forces are also now patrolling the “contact line” between Syrian and Turkish fighters. Mil-to-mil communication behind the scenes between Moscow and Ankara is helping to avoid accidental and intentional clashes.

Despite the Russian and Syrian territorial gains due to the American pullout, Moscow sees the development as an opportunity that is yet to be fully exploited.

A Russian military source who spoke to Al-Monitor on condition of anonymity said, “We don’t know just yet what was behind such a swift withdrawal of the American forces and most importantly why the Americans would want to [cede] this territory to us rather than their NATO allies — the Turks — but this is not a gift, and we need to be careful now since this may as well be their [American] last ditch effort to have Russia and Turkey collide with one another. You know, they may have been willing to pour gasoline around the house and set it on fire for us as they left.”

Al-Monitor previously reported that since the beginning of Turkey's Operation Peace Spring, Russia has signaled three primary concerns of its own to Ankara: that the incursion not hamper the Syrian Constitutional Committee; that the operation not breach Syria’s “territorial integrity,” meaning no permanent military presence once Turkey's “security need” is satisfied with the Kurds being pushed from the Syrian-Turkish border; and that in the long run deal with the issue by embracing the Adana agreement. Should the agreement require revising, Moscow is prepared to mediate and act as a guarantor.

“The main thing is that the Turks act in a way that is proportionate with the situation and that their actions do not harm the most important thing — efforts to get a political settlement in Syria. That is the main thing for us,” Yury Ushakov, Putin’s foreign policy aide, said in Riyadh Oct. 14.

When asked if Turkey’s actions squared with Moscow’s desire for Syria’s territorial integrity to be restored and respected, Ushakov replied, “Not exactly.” Kremlin spokesman Dmitry Peskov later said that Moscow does not want to entertain the possibility of a clash between Russian and Turkish forces.

Putin’s Syria envoy Alexander Lavrentiev delivered the strongest statement on Turkey's policy at a press conference in Abu Dhabi during Putin's visit shortly after Erdogan commended on the Russian leader’s allegedly “positive approach” to the Turkish incursion. Lavrentiev called the Turkish incursion “unacceptable” and asserted that it had not been cleared by Moscow in advance. Harsh rhetoric aside, the most important message Lavrentiev sought to deliver was that Moscow in fact did not mind the incursion, but wants it to stay within certain limits, meaning those stipulated in the Adana agreement.

On Oct. 15, the Russian envoy told TASS, “President Erdogan said he was going to launch the operation, whose goal was to eradicate the terrorist groups, as he understands them. So, as soon as he completes this task, Turkish forces will be withdrawn from Syria.”

Lavrentiev added that Ankara’s actions risked upsetting delicate religious sensitivities in northern Syria, an area populated by Kurds, Arabs and Sunnis. According to Lavrentiev, "[Local residents] would not take kindly to their lands being resettled by people who had never lived there,” an allusion to Turkish plans to settle refugees there from other parts of Syria.

In short, Lavrentiev reiterated Moscow's three points in regard to the Turkish operation, signaling a consensus within Russian decision-making on settling the issue. Having brokered an agreement between Damascus and Kurdish forces, Moscow is feeling more emboldened and empowered to plug away at mediation efforts between Syria and Turkey.

Erdogan has thus far been reluctant to negotiate with Syrian President Bashar al-Assad so Putin is likely to propose ways for the two governments to communicate via Moscow. Ankara may as well want to wait for a change in the Syrian leadership that may or may not happen through new constitutional procedures that the Syrian Constitutional Committee produces. Given that Assad may still be in power for a while, Russia will most probably do everything in its powers to block Erdogan’s ambitions of maintaining a permanent military presence in northern Syria. If this is to happen, Ankara will either have to eventually embrace negotiations with the current Syrian leadership or wait until a new government in Damascus but have its hands tied in northern Syria by the Russians. One way or another, in its dealings with Ankara, Moscow is likely to stick to the three principles mentioned above.

As a means of reinforcing leverage over Turkey, Russia may be even willing to let Iran, which until recently has maintained a rather low profile on this front, play a greater political role in pressuring Erdogan into embracing the Adana agreement.

“At the end of the day, Iran has somewhat greater stakes in an increased Turkish presence in this part of Syria than Russia [does],” a diplomatic source in Moscow told Al-Monitor. “Iran also wouldn’t be happy about having a Kurdish enclave here, so Tehran should be well-incentivized to join forces with Moscow to promote Russia-brokered ideas. They, however, might not be very happy that Russia may hijack the whole process, but it may be the lesser of two evils for them.”

Though the situation appears a bit convoluted now that the Americans are mostly out of the picture, Russia and Turkey are both driven by the need to strike a happy medium in what may be the last big battle in Syria. Idlib, which has fallen into media oblivion, may be settled as part of the "[final] agreement package.” Moscow and Ankara have both invested too much in their bilateral relationship and compromised enough with each other to slip into a confrontation. Russia understands Turkey's security concerns and thus its underlying intentions. Ankara is aware of Russia's security concerns and intentions, so there is room for discussion.

Following the phone call betweent the two presidents on Oct. 15, Erdogan is set to arrive in Sochi Oct. 22 for talks with Putin. This means the two are willing to play it cool and smart, to make one of the most important deals in the eight years of the Syrian crisis.