What's next for Lebanon after PM's resignation?

Lebanon’s prime minister has resigned after almost two weeks of anti-government protests and a day of violence in the country mired in economic crisis. 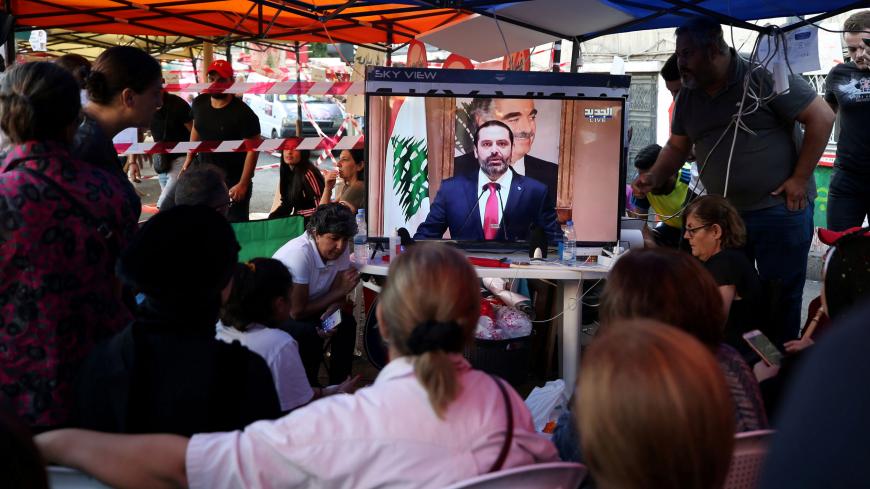 Lebanon's Prime Minister Saad Hariri resigned in an address to the nation on Oct. 29. The resignation of his government came on the 13th day of nationwide protests and after days of deadlock as the government's ministers attempted to reshuffle the country’s cabinet. It also followed a day of violence in the streets of Beirut between security forces, demonstrators and alleged supporters of the Amal movement and Hezbollah.

The resignation was a major demand voiced by protesters. President Michel Aoun will begin negotiations with political blocs in the parliament to name a new prime minister. For the time being, however, according to political officials and analysts alike, the future of Lebanon’s leadership and economy remain unclear. A number of actors in the government had opposed Hariri leaving power, but they will all now be forced to confront not only the challenge of forming a government that satisfies all the major parties, but one that meets the demands of demonstrators and is capable of averting Lebanon's impending economic collapse.

In his speech, Hariri stated that he had tried to work with various political groups to heal Lebanon and respond to the protesters who have been calling for the total resignation of the government and an end to the traditional sectarian system that has governed Lebanon since the end of the country’s civil war. The prime minister conceded that he had failed.

“Today, to be honest with you, I have hit a dead end, and it is time for a big shock to confront the crisis,” Hariri stated.

Hariri unveiled a set of bold reforms on Oct. 21 that included slashing ministers’ salaries, increasing taxes on banks and a bill to restore money lost to corruption in hopes of appeasing the demonstrators. In the days before Hariri stepped down, the Lebanese government had been in talks about how to proceed given the unrelenting pressure from the country’s streets, and had been considering a cabinet rearrangement before negotiations were reportedly held up.

Hezbollah Secretary-General Hassan Nasrallah stated in an Oct. 25 address that he was against the resignation of the cabinet. Mustafa Allouch, a former member of parliament for Hariri’s Future Movement Party, told Al-Monitor that speaker of parliament Nabih Berri, a Hezbollah ally and head of the Amal movement, tried to delay Hariri’s resignation. Berri’s office and advisers could not be reached for comment. Parliamentarian Alain Aoun, who is part of the Free Patriotic Movement, told Al-Monitor that Aoun had wanted to reach an agreement with Hariri before his resignation.

Allouch stated that Hariri had intended to resign for the last couple of days. On Oct. 29 violence in Beirut that saw supporters of Hezbollah and Amal clashing with demonstrators and security forces before destroying protest camps downtown, amid rumors of Hariri’s decision to step down. Interior Minister Raya al-Hassan, who also belongs to Hariri’s party, tweeted that the resignation was “necessary to prevent the slide toward civil strife that we have seen today in downtown Beirut.”

Upon hearing the news of Hariri’s resignation, the group of demonstrators blocking Beirut’s ring road, where clashes had taken place earlier in the day, burst into cheers and applause.

“I feel very happy because I finally feel that the people have a voice,” protester Sara al-Amin told Al-Monitor.

Another demonstrator, Rabi Younes, told Al-Monitor that he had “no fear at all” about the future despite the violence that had taken place, and was confident that a new government would come to power soon.

Nevertheless, many uncertainties lie ahead for Lebanon. Aoun has reportedly received Hariri’s letter of resignation but has not yet made an official statement on the matter. However according to Allouch, the government is officially considered resigned, and according to The Daily Star, Aoun asked the government to continue in a limited caretaker capacity.

According to the Lebanese Constitution, the president must conduct official consultations with parliamentary blocs and the body's speaker and then designate a prime minister. The parliament will remain “convened in extraordinary session” until a new government has been formed.

US Secretary of State Mike Pompeo and UN Special Coordinator for Lebanon Jan Kubis have both called for the quick formation of a new government in the wake of Hariri’s announcement. Yet, the last time Lebanon’s factions tried to form a new cabinet, the process lasted nine months, and given that deep fissures remain and have arguably grown between the various parties during the course of the protests, any agreements are unlikely to be reached soon.

Allouch stated that he and the Future Movement believe that politicians need to re-nominate Hariri to form a new government, but added that the previous status quo among Lebanon’s top leaders has gone out the window.

Hariri had agreed to back Aoun for the presidency in 2016 to bring an end to political deadlock that year, helping to end a two-year period in which Lebanon had no head of state.

Allouch added that the former prime minister will refuse to lead a new cabinet if he does not believe it is one that will allow him to govern effectively. Aoun stated that meetings are taking place, but that there is no definitive list of potential candidates yet. He added that if an agreement is not made to make Hariri or someone close to him prime minister, it may mean a one-sided government made up of parties aligned with the Free Patriotic Movement.

Sami Nader, director of the Levant Institute for Strategic Affairs, told Al-Monitor that if a new government of technocrats that implements reforms is not created, as some protesters have been demanding, the only other two possible outcomes would be disastrous for Lebanon’s future.

Lebanon’s Central Bank Governor Riad Salameh stated Oct. 28 that the country needs a political solution “in days” if a collapse is to be averted. According to Dan Azzi, a Lebanese analyst and advanced leadership fellow at Harvard, Salameh’s statement was meant to spur Lebanon’s leaders into action. He added that the resignation may not have as large of an economic impact as expected because of Lebanon’s already dire situation.

“The effect of Hariri’s resignation would not be as significant as it would be somewhere else,” he told Al-Monitor. “In fact, from demonstrators’ perspective, their confidence has probably risen.”

Allouch did not rule out the possibility of Hezbollah militias returning to Lebanon's streets if the situation deteriorates, as they did in 2008. In the ensuing days and weeks, immense challenges await Lebanon's political leaders, who will now have to contend not only with their own political agendas, but also that of Lebanon’s streets and squares. In terms of finding solutions to Lebanon’s crisis, Hariri’s resignation is only the beginning.