In what could be seen as yet another blow to Iran's sanctions-hit economy, China's state oil company has withdrawn from a major multibillion-dollar deal in the country's south. 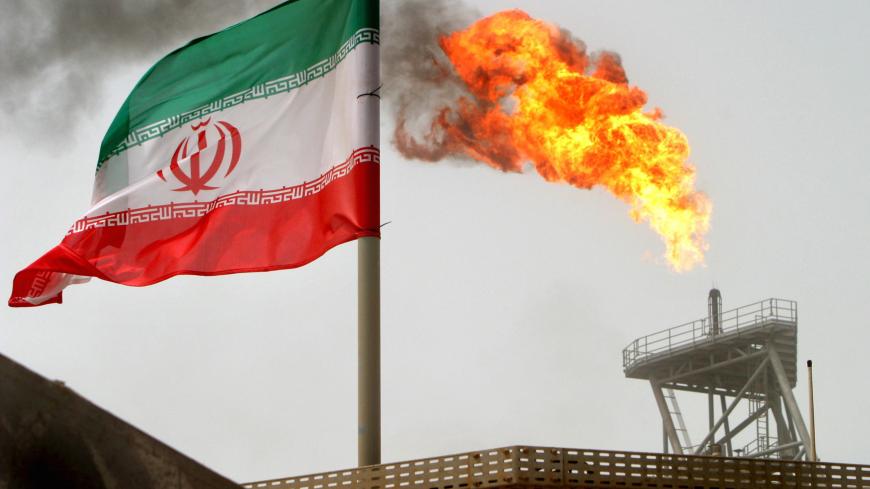 A gas flare on an oil production platform in the Soroush oil fields is seen alongside an Iranian flag in the Gulf, July 25, 2005. - REUTERS/Raheb Homavandi/File Photo

Iran's Oil Minister Bijan Zangeneh has confirmed that US sanctions triggered the withdrawal last week of China's state oil company, China National Petroleum Corporation (CNPC), from a major development project in Iran's energy-rich south. "Conditions brought about by the sanctions created a situation in which they were no longer able and willing to continue their activities in Iran," Zangeneh declared Oct. 8 in reference to CNPC and the French energy giant Total. The latter's exodus from the same project occurred last August.

The National Iranian Oil Company signed the initial contract for the development of phase 11 of the South Pars field with Total, CNPC and the Iranian partner Petropars. The firms held 50.1%, 30% and 19.9%, respectively, of the $5 billion project. However, Total's share was taken up by CNPC after the French company failed to win a US sanctions waiver that exempts a limited number of international corporations involved in the oil business with Iran. Those sanctions the administration of US President Donald Trump reimposed on Iran after abandoning the multilateral nuclear deal in May 2018.

Iran's quick replacement of Total with CNPC fell within a greater economic diplomacy approach, which the Iranian leadership has described as "Look to the East," an inclination toward boosted business with the eastern bloc, on top of which stand China and Russia. The policy has been dynamically pursued by senior Iranian officials including Foreign Minister Mohammad Javad Zarif during multiple high-level visits to Beijing.

The participation of the Chinese energy giant had revived hopes for the construction of at least 20 wells and two wellhead platforms in the field, which currently produces 660 million cubic meters of natural gas per day, over 70% of Iran's existing capacity. The contract had also worked out long-term technicalities for 10 platforms to tackle the issue of a gradual drop in the wellhead pressure of the Iranian natural gas reserves. Experts say this is the toughest challenge the industry is currently facing, and could cause a daily decline of around 28 million cubic meters as of 2023.

Unsurprisingly, CNPC's departure had many bring into question Iran's reliance on China and the overall eastward tendency. "Isn’t China the very country that was supposed to shield Iran against the sanctions?" tweeted senior Iranian journalist Ehsan Bodaghi, attacking the supporters of the "Look to the East" policy for expressing nothing beyond silence against the Chinese company's withdrawal. And the Reformist daily Aftab-e-Yazd was the only leading paper that slammed the Chinese firm for "wasting Iran's time" and departing without paying any compensation.

The brief economic relief introduced in the wake of Iran's implementation of the nuclear deal in 2015 paved the way for a multitude of international businesses to clinch lucrative deals with Tehran. Aside from the energy sector, the country's aviation industry — thirsty for renovation following decades of Western embargos — was quick to finalize voluminous purchases from Airbus and Boeing. Nevertheless, US pressure forced a halt on the deliveries and a suspension of the fledgling agreements. Against such a backdrop, the CNPC's withdrawal appears as a major setback for the "Look to the East" doctrine practiced by an increasingly frustrated Islamic Republic at a time when US government penalties continue to scare away from Iran one international firm after another.