Many of those killed by Saudi-backed forces in an assault on a Houthi-run detention facility in Yemen were prisoners loyal to the Saudi-led alliance. 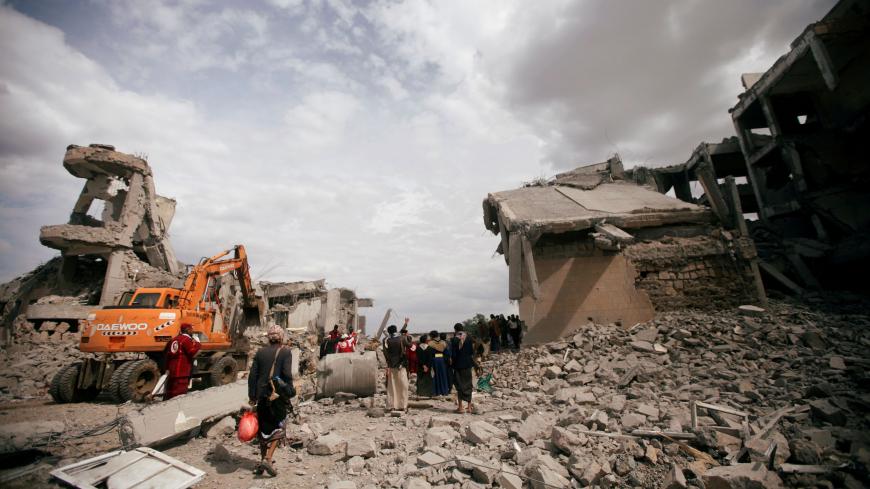 Red Crescent medics and other people inspect the site of Saudi-led airstrikes on a Houthi-run detention center in Dhamar, Yemen, Sept. 1, 2019. - REUTERS/Mohamed al-Sayaghi

DHAMAR, Yemen — Even as Saudi Arabia and the United Arab Emirates (UAE) called Sept. 8 for their proxy forces in Yemen to stop fighting each other, Houthi rebels and Saudi-backed forces were still exchanging airstrikes over the weekend.

Until recently, the two Gulf states were both backing the UN-recognized Yemeni government and were united against the Iran-affiliated Houthis. But the UAE forces in August began supporting the Southern Transitional Council separatist movement.

Meanwhile, the Houthis, in retaliation for deadly Saudi-supported airstrikes Sept. 1, said they launched a drone attack the night of Sept. 7 on the city of Khamis Mushait in southwestern Saudi Arabia. Riyadh, however, said it downed the drone while it was still in Yemeni airspace, and on Sept. 9 reported it carried out another strike, this one on a Houthi site in Al Jawf province.

The Houthis were still recovering from the Sept. 1 airstrikes on a Houthi-operated prison complex in Dhamar province, 100 kilometers (62 miles) south of the capital, Sanaa. Saudi Arabia claimed the site was a weapons depot, but the Houthis said the three buildings in the complex housed 170 prisoners, including 90 prisoners of war who backed the Saudi side.

Saudi-led coalition spokesman Col. Turki al-Maliki disagreed, saying at a Sept. 2 press conference, “The Houthi militia's allegations regarding our targeting of a prison in Dhamar city are just mere deception.”

But the International Committee of the Red Cross (ICRC) confirmed the target was a prison.

Franz Rauchenstein, head of the ICRC delegation in Yemen, visited the site not long after the attack and told The Associated Press that relatively few inmates would have survived.

Saif Abu-Hatem, who works as a security officer at the site, witnessed the scene firsthand. He said people from all walks of life rushed to the scene following the first airstrike.

One of the three prison buildings hit was a partially constructed community college. Construction had been stopped due to the war and the Houthis then used it as a detention center, thinking its civilian nature would spare it airstrikes, a Houthi official told Al-Monitor.

On Sept. 2, a spokesman for the Houthi-run Ministry of Health said in a statement sent to local journalists, including Al-Monitor, that “123 people were found dead under the rubble, while 50 others were wounded.” By Sept. 5, the Houthis reported the number of dead had reached 156.

The attack raised the ire of the international community, especially since targeting prisoners in times of war goes against international law.

“Today’s event is a tragedy. The human cost of this war is unbearable,” read a joint statement by the UN special envoy to Yemen, Martin Griffiths, and the humanitarian coordinator in Yemen, Lise Grande. “[We] hope the coalition will launch an inquiry into this incident. Accountability needs to prevail.”

Amnesty International also called for an independent investigation into the strike.

On Sept. 3, Al-Monitor visited the Dhamar hospital where bodies of the recent attack victims were kept, and where the wounded were receiving treatment. The ICRC's ambulances were seen traveling on the main road between the crumpled detention facility and the hospital.

“I wasn't expecting to be targeted [by the coalition],” a 25-year-old prisoner at the hospital told Al-Monitor.

The prisoner said he was from Dhale province in southern Yemen. He was standing by his bed on crutches with a bandage wrapped around his head. His long, untrimmed beard signaled he was a supporter of Salafism, a sect of Sunni Islam observed by a large minority of Saudis.

"All the prisoners belong to the aggression [Saudi-led coalition],” Abdulqader al-Mortadha, head of the Houthis’ National Committee for Prisoners' Affairs, told Al-Monitor in a Sept. 3 phone interview. Mortadha is in charge of negotiating prisoner trades with the coalition.

The overwhelming majority of the victims belonged to the Islah Party — Yemen’s Muslim Brotherhood wing, which backs the internationally recognized government of President Abed Rabbo Mansour Hadi — and hail from Taiz and Ibb provinces, Mortadha said. “Some of them [were captured] on the front lines, while others were arrested over [war-related] events." Some people were arrested for their support for the Saudi-led coalition, and others for collaborating against the Iran-backed Houthis.

“Over 90 people of those killed in the detention center were on the list of prisoners from the Saudi-led coalition side," to be exchanged under the Stockholm Agreement, Mortadha said.

The Houthi rebels and Saudi-backed government agreed in December 2018 during a meeting in Sweden to exchange thousands of prisoners. But the agreement reached a deadlock in late January, with each side accusing the other of providing fake names.

Concerning the wounded, Mortadha stressed that they will continue to receive treatment and remain in prison until the prisoner exchange takes place.

Both sides have been accused of using education facilities for military purposes, and of targeting civilian sites.

The Saudi-led coalition claimed in June that the Houthis fired a ballistic missile from the Sanaa University compound, which the university’s president denied.

In October 2016, at least 60 people were killed in a Saudi-led airstrike that hit a prison in Hodeidah. In December 2017, at least 39 people, including prisoners, were killed when the coalition hit a camp in Sanaa that held more than 180 prisoners.

“The mercenaries [Saudi-backed Yemeni government troops] in Marib province use al-Saleh Institute, an educational establishment, as a detention center,” Mortadha said. “There are over 400 [Houthi] prisoners detained in it.”

The troops also use other non-military facilities as detention centers, including a steel factory in Lahij city in southern Yemen and the public prosecutor's office in Taiz, Mortadha added.

Mortadha said Houthis began using the community college under construction in Dhamar as a detention facility after the prisoners’ facility at the Military Criminal Investigation Building in Dhamar province was targeted in late 2015. He explained that they can’t use military facilities to detain prisoners due to the ongoing airstrikes.

He further said Houthis coordinated with ICRC and other organizations to visit the facility regularly, stressing that all parties were aware it was a civilian facility, not a military site. The ICRC shares maps of prison locations with the Saudi-led coalition specifically to keep them from being targeted.

As Abu-Hatem walked among the buildings that were destroyed in the airstrikes, where the smell of death filled the air and flies gathered amid the debris, he covered his nose. Remains could still be seen under the rubble.