After President Donald Trump announced that he had fired his national security adviser John Bolton over very strong policy disagreements, Trump’s top diplomat and treasury chief reiterated that Trump has no preconditions to meet with Iran. 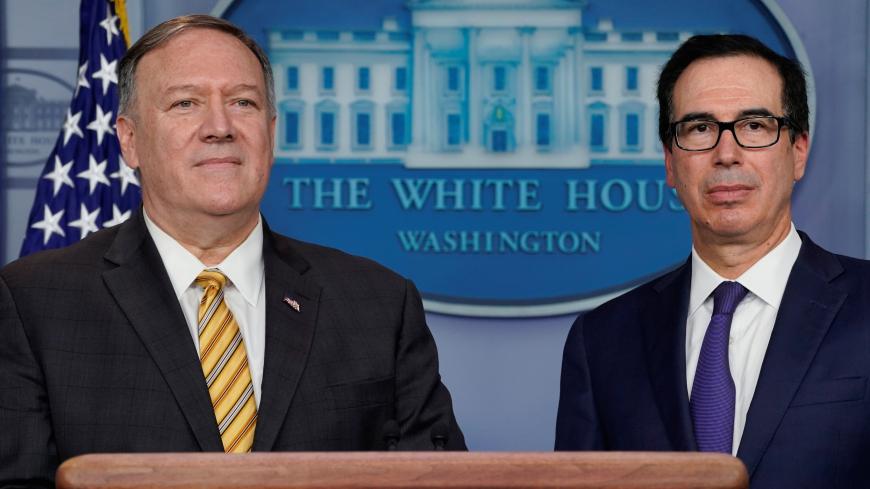 Shortly after US President Donald Trump tweeted that he had fired his national security adviser John Bolton over very strong policy disagreements, Trump’s top diplomat and treasury chief reiterated that Trump has no preconditions to meet with Iran, but said the United States is not abandoning its maximum pressure campaign.

“The president has made very clear he is prepared to meet with no preconditions,” Secretary of State Mike Pompeo said at a joint press briefing with Treasury Secretary Steven Mnuchin at the White House Tuesday.

Asked if he could foresee Trump meeting with Iranian President Hassan Rouhani at the UN General Assembly later this month, Pompeo responded, “Sure.”

“The president has made clear he is happy to take a meeting with no preconditions, but we are maintaining the maximum pressure campaign,” Mnuchin said.

The rare White House press briefing was ostensibly to announce Trump’s signing of a new executive order on counterterrorism that coincided with the United States announcing new sanctions designations of Hurras al-Deen, an al-Qaeda-affiliated group in Syria, as well as leaders and members of two dozen previously designated groups, including Hezbollah, Hamas, Palestinian Islamic Jihad, the Islamic State and its affiliates in the Philippines and West Africa, Tehrik-e-Taliban Pakistan and Iran’s Islamic Revolutionary Guard Corps' Quds Force.

The rare White House briefing had originally been announced earlier this morning as supposed to feature Bolton as well as Pompeo and Mnuchin. But just before noon, Trump tweeted that he had asked for Bolton’s resignation Monday night, and accepted it Tuesday.

“I informed John Bolton last night that his services are no longer needed at the White House,” Trump tweeted of his third national security adviser. “I disagreed strongly with many of his suggestions, as did others in the Administration.”

Trump said he would name a new national security adviser next week.

Bolton, for his part, tweeted that he had offered Trump his resignation Monday night, and that Trump said they would discuss it Tuesday. Some media subsequently published a two-line resignation letter from Bolton to Trump dated Tuesday.

Pompeo and Mnuchin both grinned broadly when asked if they were blindsided by Bolton’s ouster. Notably, neither Cabinet official gave any comment or gesture to suggest they had any regrets to see Bolton go.

“There were many times Ambassador Bolton and I disagreed, that's to be sure,” Pompeo said. “But that's true for lots of people with whom I interact.”

“The president's view of the Iraq War and Ambassador Bolton's was very different,” Mnuchin offered. “And the president has made that clear.”

Al-Monitor reported last week that, as Trump has mulled Iran diplomacy and French proposals to try to reduce tensions with Iran, Mnuchin has played a more prominent role as a more pragmatic voice in the inter-agency debate on Iran.

Brookings Institution scholar Thomas Wright foresaw Bolton’s exit from the Trump administration as inevitable after Trump dispatched Bolton to Mongolia when Trump traveled to the Demilitarized Zone on the Korean Peninsula on June 30, and called off Iran strikes earlier that same month.

“Trump now finds himself with a national-security team out of sync with his preferences,” Wright wrote in the Atlantic on July 5. “It’s hard to see how Bolton can stay. Trump has long known that Bolton wants war more than he does. He sidelined him on North Korea and overruled him on Iran. For his part, Bolton has privately attacked Pompeo, long a Trump favorite, as falling captive to the State Department bureaucracy and has predicted that the North Korea policy will fail.”

As to who would replace Bolton, Wright suggested the candidates could include Trump’s envoy on North Korea, Steve Biegun, who was “rumored to be the runner-up to Bolton for the post in 2018,” as well as retired Army colonel and Gulf war veteran Douglas Macgregor, a frequent guest of Fox News talk-show host Tucker Carlson. Wright characterized Macgregor as “favoring retrenchment from the Middle East and good relations with authoritarian states.”