How strong is Netanyahu’s alliance with the ultra-Orthodox?

The alliance between Prime Minister Benjamin Netanyahu and the ultra-Orthodox parties is one of pure interests; both sides must stick to it or risk failure. 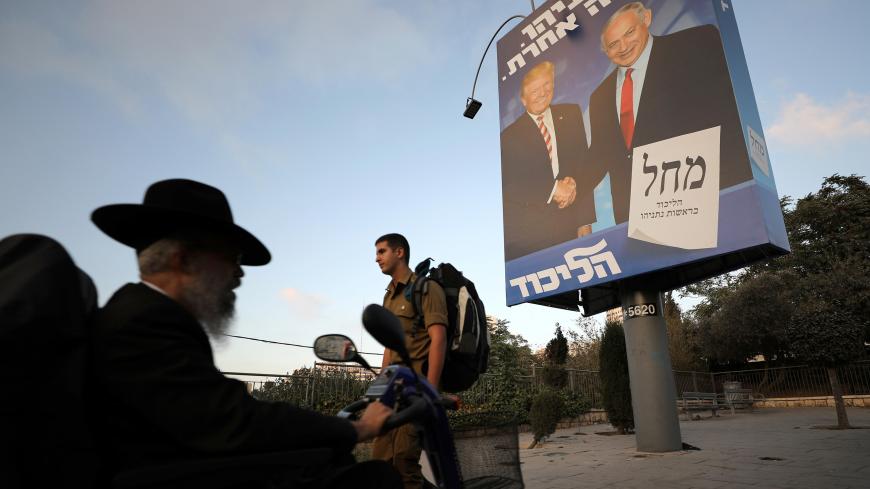 Once he realized on election night that he failed to win 61 seats for his right-wing ultra-Orthodox coalition, the first thing Prime Minister Benjamin Netanyahu did was call the heads of all the parties in his bloc. He wanted to keep them close. Only later, at almost 3:00 a.m., he actually arrived at the Exhibition Center in Tel Aviv to address the Likud’s Central Committee. In his speech, Netanyahu made it perfectly clear that he wasn’t going anywhere (in case someone or other in the Likud started putting an attempt to remove him into motion). And ever since that night, Netanyahu has spent most of his time keeping the ultra-Orthodox and right-wing parties close and applying pressure to the Likud’s top leadership to ensure they remain united behind him.

Once Netanyahu formed his 55-seat bloc consisting of 32 seats for the Likud, nine for Shas, seven for Yahadut HaTorah and seven for Yamina, he has been keeping them as close as possible to prevent Blue and White from forming a new government. How close? So far, he has had countless phone calls and personal meetings with the bloc’s top leadership. One thing about Netanyahu: If he needs something, he knows how to court people with rare intensity and enthusiasm. Now that his political future relies on his colleagues in the right-wing ultra-Orthodox bloc, Netanyahu is doing exactly that. “If he could, he would bring them all back to his office and babysit them himself to watch them 24 hours a day, just to make sure that they stick with him,” one senior Likud minister told Al-Monitor on condition of anonymity. He claims that Netanyahu considers this 55-seat bloc to be an existential necessity.

But even without having them physically nearby, Netanyahu is doing everything he can to make the associates in his bloc feel confident about their partnership with him. On the evening of Sept. 23, after returning from his meeting with Blue and White leader Benny Gantz at the President’s House, when reports started leaking out about a unity government in the making, Netanyahu was quick to reassure his partners that he has no plans to abandon them. He did this on a late-night conference call with the leaders of all the bloc’s parties, including Shas Chairman Aryeh Deri; Yahadut HaTorah Chairman Yaakov Litzman; and leaders of Yamina, including Ayelet Shaked, Rafi Peretz, Naftali Bennett and Betzalel Smotrich. According to one of the participants in that phone call who spoke on condition of anonymity, Netanyahu reiterated that he is "committed to what I promised you.’’ He also said that he is "negotiating [with the Blue and White party] on behalf of all the members of the bloc.”

In personal discussions, Netanyahu told them that he anticipates all sorts of spins over the next few days as part of an effort by the Blue and White party to drive a wedge between him and the right-wing bloc. He also asked them to ignore reports that he is abandoning them. Just as he anticipated, on Sept. 24 the media started releasing reports attributed to Blue and White that Netanyahu only represented the Likud in the coalition negotiations and not the entire bloc. Netanyahu denied this immediately and was quick to reassure his partners that this was not the case.

As desperate as it was, Netanyahu’s move to create a bloc of 55 seats was able to prevent Gantz from forming a government. At the same time, however, he also made it impossible to form a national unity government. Of course, there was little chance of that happening anyway, given the indictments hanging over him. During the election campaign, Blue and White vowed not to sit in a government with Netanyahu.

So far, his 55-seat bloc has proved itself to be resilient. There are no cracks in it. The leaders of the ultra-Orthodox parties have stated explicitly that they will only form a government with Netanyahu. The alliance between Netanyahu and the ultra-Orthodox is strong, as it is based on their most pressing interests. In fact, the ultra-Orthodox believe that they have no other options. They feel like they are under attack ever since Yisrael Beitenu Chairman Avigdor Liberman announced that he would not sit in a government with them. Despite Liberman’s denials, he seems to be coordinated with the senior leadership of Blue and White — particularly with the No. 2 person on that party’s list, Yair Lapid. Both parties campaigned against the ultra-Orthodox in the last election, and Liberman made joining a coalition conditional on it being a unity government consisting of the Likud, Blue and White, and his Yisrael Beitenu only. This left the ultra-Orthodox with no real options. As far as they are concerned, the 55-seat bloc is a “defensive alliance.”

Anyone attempting to undermine this alliance would see how stable it is. Deri, for example, made a point of siding publicly with Netanyahu at a toast in honor of the New Year on Tuesday night. At the event, the Shas leader said that Netanyahu updated him about the talks with Blue and White, and he was given to understand that Netanyahu is willing to accept a unity government with a rotating prime minister. Deri then said that he supports a unity government and called on Gantz to withdraw his rejection of Netanyahu. “Benjamin Netanyahu is a talented leader with enormous achievements,” said Deri. “He should not be boycotted. They’re willing to sit with the Arabs but not with Netanyahu? What’s that all about?”

Ayelet Shaked also announced at a makeshift press conference Sept. 24 that her party trusts that Netanyahu “will keep his commitments to the right-wing parties.”

Despite his failure in the election, Netanyahu has succeeded in creating a series of defensive lines to protect himself from the legal proceedings against him. His first line of defense consists of his bloc of 55 seats, enough to prevent Gantz from forming a government. The second and perhaps most important line is his own Likud party. Based on talks that Al-Monitor had with Likud ministers this week, it seems as if at this stage at least, they are all united around him. All that Blue and White and Liberman can hope is that this unequivocal support for Netanyahu will shift the harder it becomes for him to form a government.

On Sept. 26, Netanyahu will host a toast to the New Year at the Kfar Maccabiah Hotel for the members of his Likud party. The Likud is organizing buses from across the country to bring party members to the venue. It is expected to be one of the biggest shows of strength and unity that the party has ever seen. Netanyahu will likely address the Likud party leadership and thousands of members of the party’s central committee, and try to relay the message that the entire Likud party stands behind him. With this, he hopes to challenge the working assumption of both Blue and White and Liberman that it is possible to form a government without him.