If Prime Minister Benjamin Netanyahu fails to pass a law for installing cameras in Israeli-Arab polling stations, and if he loses the elections, he plans to cry out the election results were falsified. 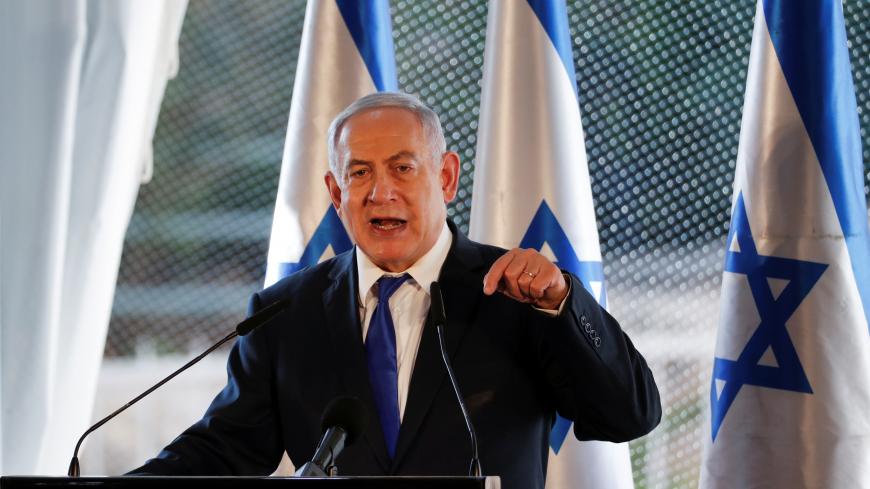 Israeli Prime Minister Benjamin Netanyahu gestures as he speaks during a state memorial ceremony at the Tomb of the Patriarchs, a shrine holy to Jews and Muslims, Hebron, West Bank, Sept. 4, 2019. - REUTERS/Ronen Zvulun

For the first time in its history, Israel is facing a real possibility of government chaos and a deep and unprecedented constitutional crisis. The person behind this crisis is the head of government himself, Prime Minister Benjamin Netanyahu. He is doing it intentionally; it is all part of his plan. He wants to use this chaos to survive and escape justice, and is prepared to use the theory of the “Deep State” to destroy the “State.”

Netanyahu is no longer acting in an official capacity. He is going all the way in fulfilling the predictions made about him once his legal problems began two years ago. He will not hesitate to set the country and its institutions on fire, if it means saving his seat. A legal source told Al-Monitor on condition of anonymity that at a meeting of top legal and law enforcement officials last week one of the participants noted, “Netanyahu will not leave his official residence of his own free will.”

For the past two years, Netanyahu has been busy meticulously destroying the official agencies of Israeli law enforcement. He began with the police, including its investigators and even its commissioner, and then moved on to the State Attorney’s Office, the Supreme Court, Chairman of the Central Elections Committee Supreme Court Justice Hanan Meltzer and Attorney General Avichai Mandelblit. At the same time, he has been bashing the media, going after journalists he doesn't like one by one. Even if he wins the next election — and the chances of him winning the coveted 61 seats are fair to good — his fate will still depend on the Supreme Court. He has no interest in standing trial, even if his coalition allows him to continue in his position while that is going on. If the Knesset grants him immunity (it is supposed to be put up to a vote), the Supreme Court will still be asked to rule on the decision. In that case, there is a chance that the Supreme Court will overturn his immunity. Netanyahu has no plans to comply with this decision and will incite his supporters to back him up in this. This will likely result in a serious dilemma. To whom should the various officials in Israel actually listen: the Supreme Court or the prime minister, his justice minister (who will inevitably be chosen from among Netanyahu’s staunchest loyalists) and the government? A question like this has never come up since the country’s founding. Israel has always been a law-abiding state, and a nation where the principle of the “supremacy of the law” has never been questioned. It is no longer such a state.

We haven’t quite gotten there yet. Before that happens — meaning now — Netanyahu will attack the very legitimacy of the election. By Sept. 3, he was already insisting that “the elections are being stolen from us,” referring to the results of the first round of elections in April this year. Netanyahu hinted about an alleged fraud in the April elections, which according to him could reproduce itself. The factual basis for this may be weak and even ridiculous, but it does not prevent the prime minister from laying the groundwork for Sept. 17. His big plan is to challenge the election itself. If he fails to collect 61 seats and form an “immunity government,” Netanyahu will claim serious voter fraud, hoping that this will set off a chain reaction, mass recruitment of his base and chaos.

He is basing this claim on a demand he made to install cameras in polling stations in the Arab sector in order to prevent voter fraud there. The Likud claims that voter fraud took place in 107 polling stations in the north of the country, all of them in Arab areas. According to the claim, this helped the Arab-nationalist Balad party, which ran as part of the Ra’am-Balad list, inch past the electoral threshold of four mandates and enter the Knesset. Were it not for this fraud (Likud claims), Balad would not have made it in, and the defunct New Right party of Naftali Bennett and Ayelet Shaked would have gotten into the Knesset instead. This would easily have given Netanyahu a government of 64 seats.

That does not bother Netanyahu. He is now demanding that cameras be installed in Arab sector polling stations for the next round of elections, in just 10 days. As chairman of the Elections Committee, Meltzer rejected this demand, while the attorney general ruled that it was unconstitutional. Netanyahu is using all of this to his advantage. He is causing a huge ruckus by having Knesset members and ministers subject to his authority advocate for it, while establishing an alibi for himself in case he loses the elections. At the same time, he is trying to pass flash legislation to allow these cameras to be installed, despite the angry opposition of the regulators. True, there is little chance that this legislation will pass in the time left. If, however, there are no cameras, Netanyahu will have his argument all ready for Sept. 18. Based on his past record, it is not at all certain that he will hesitate and change his mind. There is no assurance that he will conclude that the country is more important than him.

Netanyahu is sinking, and he is clutching at straws. The problem is that these straws are lethal. In fact, they could drag the whole country down with him. This isn’t just any election. It is a sharp fork in the road for Netanyahu and his personal and political survival. If he fails to form the next government, he will have to stand trial like any other citizen, facing three serious criminal charges. He may even end up in prison. He needs to win those 61 seats. If not, he will have to come up with some other solution.

The working assumption is that Blue and White head Benny Gantz, Labor Chairman Amir Peretz and Yisrael Beitenu head Avigdor Liberman will not break their explicit promises that they will not join a narrow government headed by Netanyahu. Though he neutralized the threat of an independent run by Moshe Feiglin and his Zehut party (Feiglin joined the Likud on Aug. 29), the prime minister still has to deal with the headache of the ultra-right, Kahanist Otzma Yehudit (Jewish Power) party running independently. Polls show that this party will win about 2.5% of the vote, which is below the 3.25% electoral threshold. If this actually happens, the right would lose three valuable seats. Their votes will then be divided up among the big parties, and it will be almost impossible for Netanyahu to reach 61 seats. Yet he still hopes to get past this obstacle at the very last moment.

In the event that none of this works, he still has his backup plan of challenging the legitimacy of the election. There is no scenario in which Netanyahu will give up. He always fights to the very last drop of political blood. The real question is whether he will choose to take that route when the blood in question is the blood of the nation he leads.