A week after Israel’s legislative elections, President Reuven Rivlin has chosen Prime Minister Benjamin Netanyahu to make a first attempt at forming a government, but a path to a majority coalition remains difficult. 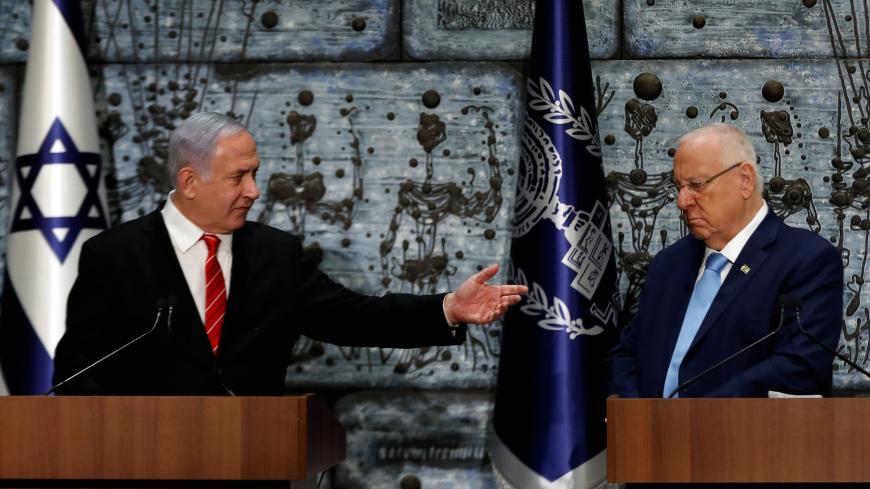 A week after Israel’s legislative elections, President Reuven Rivlin has chosen Prime Minister Benjamin Netanyahu to make a first attempt at forming a government, but a path to a majority coalition remains difficult.

The president chose the current prime minister over his main rival, Benny Gantz, whose Blue and White party came in first in the Sept. 17 elections with 33 seats to the Likud's 32. Rivlin's decision comes after several meetings organized by the president aimed at getting the two to form a unity government failed. The negotiations reached a deadlock after Netanyahu insisted that all his partners from the right and religious parties be included. This is the second time Israel has held legislative elections in five months; last week's election was set after Netanyhu failed to assemble a majority coalition following the April poll.

The premier now has four weeks to bring together a coalition of at least 61 seats in the 120-member Knesset. In a statement Sept. 25, Rivlin explained that his decision was based on who has the best chance at forming a government, saying, "In this situation, 55 [members of the Knesset] supported Netanyahu and 54 supported Gantz." He added that 10 of Gantz's supporters from the Arab Joint List supported Gantz but had declared they would not participate in a government under him.

Why it matters: The election results gave no candidate a majority to build a coalition, with the only immediate foreseeable option being a unity government. With Israel consumed with elections for much of the past year, the government has been crippled and faced difficulties in dealing with economic and security challenges. If Netanyahu cannot convince one of the center or left parties to join him within the 28-day deadline, he will have to go back to the president.

The "holy alliance" versus unity: Netanyahu's Likud is allied with the ultra-Orthodox parties and the right-wing Yamina alliance and, according to an agreement they signed, they operate as one bloc in coalition negotiations. Gantz, on the other hand, had promised a liberal-secular government and to implement reforms on religious state issues, something opposed by the ultra-Orthodox parties. For now that is the main obstacle preventing a unity government. But both Netanyahu and Rivlin declared today that a solution will be found, even if this does not happen right away. National reconciliation, Netanyahu said, is "a must" in light of Iranian threats and the planned release of President Donald Trump's peace plan.

The indictment element: The other obstacle facing a government formation is the indictment that Netanyahu is going to face in the coming months. Gantz declared during the elections that he would not be part of a government where the prime minister is under indictment. Rivlin suggested a solution where Netatyahu would step out of his role if indicted, with Gantz serving as acting premier until and if Netanyahu returns. Both sides showed willingness to accept the idea.

What's next: The Likud and Blue and White's teams are scheduled to meet tomorrow and Friday, and likely again in the coming four weeks, to negotiate to form a coalition. Netanyahu alternatively could try to ally with Avigdor Liberman, the leader of the secular right-wing Yisrael Beitenu party, but it is unlikely that this would succeed. Liberman has refused to join a government with the ultra-Orthodox parties, and the latter are necessary for Netanyahu to form a coalition without Gantz.

See more: Check out Ben Caspit's article on whether or not President Rivlin has the ability to prevent a third election.