Turks skeptical over accord with US for Syrian 'safe zone'

Many Turks fear that Turkey will be left in the lurch again with the new safe-zone agreement, as it was with the Manbij road map. 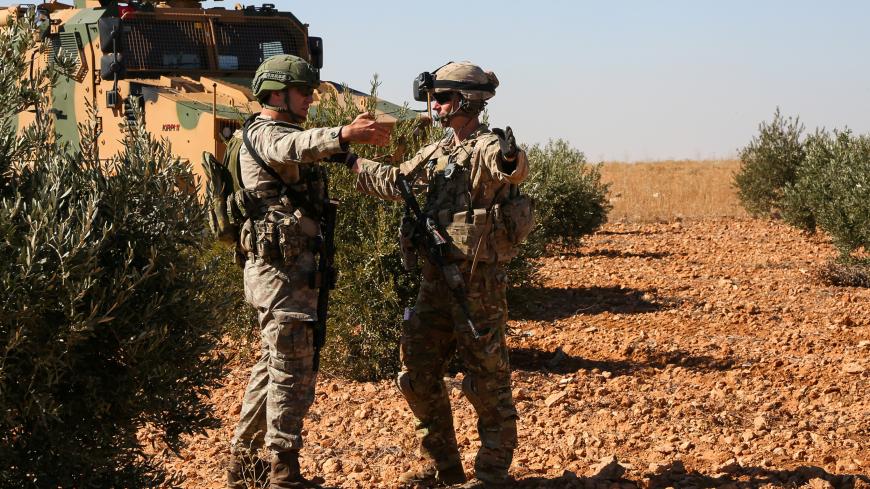 President Recep Tayyip Erdogan’s government is trying to present the agreement arrived at with the United States on Aug. 7 for a “safe zone” in northern Syria as a “very good beginning.”

Not everyone is convinced though, even if the pro-government press is trying to convince the public that Ankara scored a diplomat coup with this accord.

Turkey has been beefing up its military presence along the Syrian border recently, leading many to believe that an incursion into Syria was only days ahead. Government supporters maintain that it was Erdogan’s threats of military action against the US-backed Kurdish People's Protection Units (YPG) in Syria that secured this latest agreement.

Whatever the case may be, this agreement had reduced the possibility of Turkish incursion into northern Syria for now.

Many point to the vague and unclear nature of the joint statement on the accord issued simultaneously by the sides. Parallels are also being drawn with the failed “Manbij road map” concluded between Ankara and Washington in June 2018.

That “road map” was supposed to result in the evacuation of the YPG from Manbij, a city west of the Euphrates River, and act as a prelude to eliminating the Kurdish group from lands east of the Euphrates within a set time frame. None of that happened, leaving many Turks feeling that Washington had again duped their government.

America, in the meantime, showed that it would stick with its alliance with the YPG.

President Donald Trump even threatened in January to “devastate Turkey economically if it hit the Kurds.”

Ankara says the YPG is an offshoot of the Kurdistan Workers Party (PKK). The United States also lists the PKK as a terrorist organization but differs with Turkey over its assessment of the YPG.

“We are committed to those who have fought with us not being attacked and not being harmed by anyone … that includes our concerns about the Turks,” Jeffrey told a press briefing in Washington.

“Equally, we’re very concerned about the threat of the PKK and offshoots of the PKK against Turkey,” Jeffrey added, admitting that they were “trying to balance both of these very important concerns with one very important NATO ally and one important partner in the fight against [the Islamic State].”

The Manbij road map was also concluded after dire warnings from Erdogan about an imminent Turkish military incursion into Syria to root out the YPG, and had succeeded in preventing such and operation.

Many argued at the time that the road map also showed that Erdogan, despite all his hard talk, was ultimately forced to climb down and refrain from taking steps that could have resulted in a military faceoff with the United States.

Erdogan and Trump have since established a warm relationship, reflected in the manner in which they are handling the crisis over Turkey’s purchase of Russian S-400 air defense systems. There is no evidence, however, to suggest, that this friendship will extend to cooperating against the YPG in the way that Ankara wants.

The joint statement on the agreement arrived at provides no specifics about the proposed safe zone. Ankara still insists on a 30-32 kilometer (18-19 mile) deep zone and wants exclusive control over it.

Washington has reportedly accepted a 5-kilometer (3-mile) deep zone, which can be extended gradually to 18 kilometers. But it wants the zone to be controlled by the US military and its coalition partners in Syria.

It is not clear how this disagreement has been overcome with this agreement. Neither is it clear what the timeline for setting up the safe zone is.

The relatively brief joint statement only refers to “the rapid implementation of initial measures to address Turkey’s security concerns.” It goes on to indicate that “a joint operations center” will be set up in Turkey “as soon as possible in order to coordinate and manage the establishment of the safe zone together.”

US military officials arrived in Turkey this week to set up the center in the southeastern city of Sanliurfa. The way ahead appears long, since the agreement will be implemented in stages, according to many analysts.

How Ankara’s sense of urgency and Washington’s attempts to play for time will be reconciled remains another outstanding question.

Public support for the agreement is important for Erdogan since the whole Syria issue has become intertwined with domestic politics. This is why pro-government commentators are hailing the agreement as an important development.

They, too, are hard-pressed to find evidence that suggests this agreement will meet Turkey’s demands. They prefer to highlight other aspects of the accord.

Burhanettin Duran, who heads the government-funded SETA Foundation in Ankara, underlined, for example, that the agreement was “a good starting point for further cooperation.”

“The fact that this agreement provides for the two allies to work together in northern Syria and does away with the risk of them facing off in the field is a positive development,” Duran wrote in an article for the pro-government daily Sabah.

Such commentary does little to explain to the public what was really achieved with this agreement with regard to Turkey’s very clear demands.

Trying to address this concern, Mehmet Acet, a commentator for the pro-government daily Yeni Safak, wrote that the details of the agreement were being kept secret, adding that this was part of the deal.

“Nevertheless, the question of ‘how much the US can be relied on' remains a valid one,” Acet added, reflecting a prevalent concern among government supporters that Washington will leave Turkey in the lurch again, as it did in Manbij.

Veteran political commentator Fikret Bila argued in an article for the T24 news portal that this agreement fails to resolve the YPG problem.

He wrote that the agreement had also “shelved Turkey’s plans to enter east of the Euphrates with an army corps in order to set up a 30-32 kilometer ‘peace corridor’ and prevent the establishment of a PKK mini-state.”

Like many Turkish commentators, Bila refers to the YPG as the PKK.

In a follow-up article, Bila wrote that the United States was sending truckloads of supplies to the YPG on the day that the decision to establish a joint operation center in Turkey was made.

“It is clear that the US is determined to protect the PKK and strengthen it,” Bila claimed, adding that Turkey has been forced into accepting an agreement similar to the Manbij road map.

The government’s critics also highlight that this vague agreement was arrived at shortly after US Defense Secretary Mark Esper said any Turkish incursion in northern Syria would be unacceptable, and warned that they would prevent this.

The belief is that once again Erdogan could not risk a major standoff with the United States, despite his hard talk, and settled for lesser terms instead.

Others see the key to understanding Turkey’s position in the joint statement’s stipulation that “the safe zone shall become a peace corridor, and every effort shall be made so that displaced Syrians can return to their country.”

An acrimonious debate over the presence of nearly 4 million Syrian refugees is raging in Turkey and putting pressure on the government.

Despite this agreement, Ankara appears set to keep the pressure on Washington, with its continuing talk about acting unilaterally if the United States does not honor its pledges in Syria.

In his public message marking the Eid al-Adha feast, Erdogan even promised “a new victory this August” in northern Syria, after recalling major historic Turkish victories in the month of August.

Foreign Minister Mevlut Cavusoglu told a gathering in the southern city of Antalya that lands east of the Euphrates would be cleared of the YPG, with or without US support.

Such threats will most likely continue in the coming days and weeks. Whether they will be carried out, though, remains an open question.

Much more important for now, however, will be how the sides clarify their understanding of the agreement arrived at to set up a “safe zone” in northern Syria. The possibility that they find that they are not on the same page again should not be discounted.