US leniency on S-400 offers Turkey chance to repair economy

The US president's reluctance to impose sanctions following Turkey’s purchase of the Russian S-400 missile system has created a window of opportunity for officials to restructure the nation’s ailing economy. 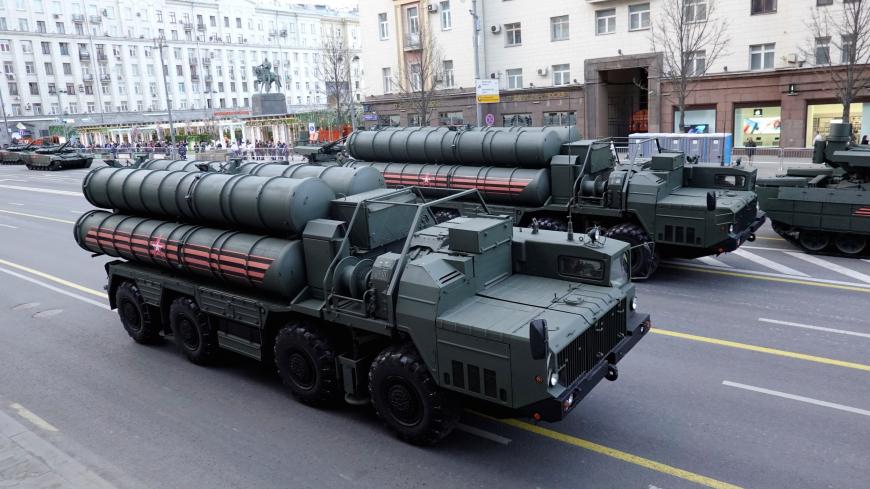 Russian servicemen sit in the cabins of S-400 missile air defense systems on Tverskaya Street before a rehearsal for the Victory Day parade marking the anniversary of the victory over Nazi Germany in World War II, in central Moscow, Russia, April 29, 2019. - REUTERS/Tatyana Makeyeva

In his first press conference as the new governor of the Central Bank of the Republic of Turkey, Murat Uysal reduced the nation’s inflation forecast and said he had “considerable” room to implement more interest rate cuts in the coming months.

Uysal was appointed by President Recep Tayyip Erdogan earlier this month after his predecessor was dismissed for resisting aggressive interest rate cuts. During his speech on Wednesday, he echoed comments by Turkey’s Finance Minister Berat Albayrak the previous day that state leaders would seek to implement financial policies to revive Turkey’s long-ailing economy.

“In the upcoming period, we have a considerable room for maneuver on rates. Its application, timing and size will depend on the improvements on prices and financial stability,” Uysal said. “We will make [the decision] based on data.”

The press conference came a week after Uysal implemented Turkey’s first monetary easing policies in four years, slashing the central bank’s key interest rate by 425 basis points to 19.75%. The cut was deeper than most investors had expected, but made little initial impact on the nation’s currency, the Turkish lira, which has since appreciated slightly.

Such policies can be risky at a time when Turkey’s inflation rate hovers just below 16%, unemployment remains high and many banks and private companies struggle with foreign currency-denominated loans following the lira’s collapse in August 2018. Yet some observers say that Turkish officials have been granted a window of opportunity to repair the nation’s economy by US President Donald Trump’s reluctance to impose widely anticipated sanctions for Erdogan’s acquisition of Russian-made S-400 missile defense systems.

Whether the central bank will now move to improve credibility issues and address the root causes of the nation’s sluggish economic growth remain to be seen, said Wolf Piccoli, co-president and political risk analyst at Teneo Intelligence.

“There is a grace period now provided by the improved external backdrop, but they are not using the grace period to fix the house,” Piccoli told Al-Monitor. “Actually, what they are doing is more damage and are generally just trying to gain more time.”

Members of the US Congress are likely to push back on Trump’s current stance over the S-400 delivery, which under the Countering America's Adversaries Through Sanctions Act (CAATSA) was expected to trigger sanctions that could further cripple Turkey’s economy.

Until that time arrives, Piccoli said Turkish officials could work on structural issues stemming from large corporate debts, but they seem to have chosen to spur short-term growth through rate cuts, which could prove detrimental in near future.

“Will [the cuts] make a difference in terms of boosting the growth outlook? I seriously doubt that,” Piccoli said. “There is a lack of confidence, there is too much uncertainty, there is no light at the end of the tunnel. They are employing their old tricks, but the old tricks might not work in this new environment.”

Earlier this week, Albayrak, who is Erdogan’s son-in-law, said the government won't cover bad loans and that Turkish banks would have to implement the necessary restructuring on their own to mitigate losses. Yet according to Selva Demiralp, a professor of economics at Koc University, government intervention in resolving private construction, real estate and energy companies’ foreign debt — roughly $20 billion — is crucial in establishing a sustainable economic recovery.

“Companies that borrowed in foreign currencies are still in bad shape. There are still non-performing loans and we haven’t resolved this issue about how those bad loans will be cleaned from bank balance sheets,” Demiralp, who is also the director of the Koc University-TUSIAD Economic Research Forum, told Al-Monitor.

“Before we do that,” she continued, “I don’t think we will be able to implement any other policy effectively because even if you inject money into the system, either in the form of expansionary monetary policy or in the form of some type of subsidy by the fiscal policy, people are not really confident about the system. They just go ahead and buy more dollars.”

Following last year’s currency crisis, many Turkish citizens exchanged liras for US dollars, and now, even as the lira recovered slightly in recent weeks, Demiralp said some Turks have taken the opportunity to buy more dollars as many expect more economic turbulence moving forward.

In addition to looming CAATSA sanctions, Turkey faces additional financial penalties from the European Union, which imposed punitive measures on the nation for its controversial gas-drilling activities in disputed offshore territories near Cyprus.

For the time being, the lira is enjoying a period of relative stability, as global trends are likely to make Turkey a main beneficiary of carry-trade and short-term speculative investments. The central bank indicated more rate cuts are on the way, possibly in September, but Demiralp said the lucky spate of events that have given the Turkish economy a bit of breathing room can end as quickly as they began.

“The current situation is subject to volatility because money can come today and be gone tomorrow,” Demiralp told Al-Monitor. “Trump could send a tweet and the money could flow out immediately.”