How Syrians in Kurdish areas get rid of extremism

Following the arrest of an Islamic State cell in Hasakah in northeastern Syria, citizens were concerned about the ongoing presence of extremism in their areas despite the group’s defeat. 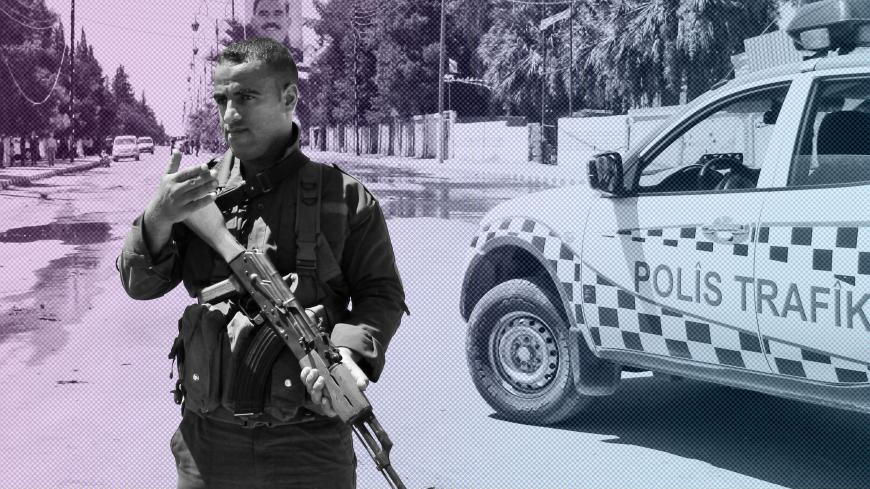 A member of the Kurdish security forces stands guard at the site of a vehicle packed with explosives that detonated, al-Qahtaniyah, Syria, Aug. 7, 2019. - MUHAMMAD AHMAD/AFP/Getty Images

A number of rigged motorcycles and car bombs, for which the Islamic State (IS) claimed responsibility, have recently shaken up Hasakah province in northeastern Syria, killing a number of civilians and military personnel and injuring others, and causing significant material damage. The attacks have pushed the authorities in the area, which is controlled by the Kurdish-led autonomous administration, to launch a crackdown against IS cells that remain active despite the group’s defeat.

The military council in Hasakah province announced Aug. 1 the arrest of gunmen, including one Iraqi, affiliated with IS in the predominantly Arab neighborhood of Ghuwairan in Hasakah city.

According to security sources and eyewitnesses who spoke to the media, large quantities of weapons, highly explosive phosphorus and other raw materials for making improvised explosive devices were confiscated. Detainees were transferred to detention centers and investigations are still ongoing.

The crackdown coincided with an aerial landing of coalition forces in al-Haddadiya in al-Shadadi countryside, targeting and arresting a wanted IS operative.

At a press conference held at the Kurdish security organization Asayish station in Hasakah, Hussain Salmo, head of the military council, said Aug. 1, “Based on accurate information Hasakah’s military forces obtained from the people of Ghuwairan about the presence of strangers in their neighborhood, we found out they formed an IS cell after keeping tabs on them for several days.”

Salmo said that the raid, which started on Aug. 1 at 3 a.m. and lasted until 10 a.m., took place “with the participation of all military forces of Hasakah’s military council, Asayish, the military police, the rescue forces and the Self-Defense Forces.”

Fahima Waddah, a resident from Hasakah, told Al-Monitor, “All bombings and arrests of groups of different ages have one thing is common: They all include non-Syrians, as was the case in the most recent arrest operation. In addition, the ongoing murders and booby traps pose a threat to local security, which necessitates the need to develop and activate mechanisms to control this phenomenon.”

The Asayish media office issued a statement Aug. 1 explaining the circumstances of the raid. It noted that 20 IS operatives were arrested in the operation and a large number of weapons and ammunition was found in secret warehouses, including “Kalashnikovs, weapons, bombs and ammunition and a Dushka,” in addition to a chemical mask and night goggles.

Speaking to Al-Monitor, author and human rights activist Nayef Jabiru called for “tightening long-term security measures because the terrorist [extremist] mentalities cannot be eliminated in a short period of time. They could resurface anytime, anywhere, which poses the greatest danger to our society and the security we are reinforcing.”

According to Jabiru, the elimination of IS is not limited to the military or security side, but also calls for “working in a systematic and continuous manner within certain cultural programs to change the cultural mentality in areas where the IS mentality is ever-growing and affecting its surroundings, which poses a threat for the foreseeable future as well.”

He called on people “not to trust Asayish or military officers who have any ties with IS operatives and place them under indirect surveillance,” and underlined the importance of the law’s role in getting rid of extremist ideas in society.

“The law has two main objectives: general deterrence and specific deterrence,” he noted, referring to the autonomous administration releasing IS members every now and then.

Thousands of IS members were arrested during the offensive against the group and after its defeat earlier this year, with some being held in detention centers and others in prisons.

The autonomous administration and the Syrian Democratic Forces have released several batches of IS members from prison over the past months, arguing that the defendants did not have blood on their hands. In some cases, they are released through tribal mediation, and in other cases the public relations committee of Deir ez-Zor’s local council intervenes to release IS detainees from prison.

“Not releasing criminals but rather punishing them achieves specific deterrence,” Jabiru noted. “That's how general deterrence is reached, as others would not even dare commit such crimes after seeing the punishment. At the same time, the cultural mindset where these criminal ideas and this extremist mentality are nestled needs to change.”

Syrian researcher and freelance writer Baraa Sabri told Al-Monitor, “The truth is, there is no such thing as a complete elimination in the fight against extremists in the world. There are always ways with which leaders of such groups can feed their supporters and revive their activity.”

He noted, “Providing services, accelerating reconstruction and bringing displaced people back play a role in the main remedy for such an extremist mindset.” However, he explained that the geographical area, borders, hiding tactics and international disputes over each country’s position in the region play an important role in reviving any group, as each country would indirectly support one group to fight the other.

“The geographic location in which IS cells are settled helps them to grow again,” he added.

According to Sabri, the group’s proximity “to Iraqi areas brings it closer to the Sunni militant groups there; and the fact that it is close to the Iranians and the regime on the other bank of the Euphrates River, it [IS] would work against the United States.”

Sabri said that focusing on contentious issues through the media has a major negative role in reviving extremist groups. “The ongoing media reports about national Kurdish-Arab disputes resulting from uncontrolled behaviors are also an additional factor that extremists take advantage of,” he added.

He stressed the need for serious efforts to reduce such incitements through “community cooperation, controlling the behavior of the authorities on the ground and trying to understand the causes of such activity. In addition, having a proper understanding of the texts they use in a politicized manner is the most appropriate solution to deal with those entities.”