Jordan summoned the Israeli ambassador over Israeli violations at Al-Aqsa Mosque in Jerusalem, while Jordan’s Parliament called for his expulsion amid tension at the Muslim holy site. 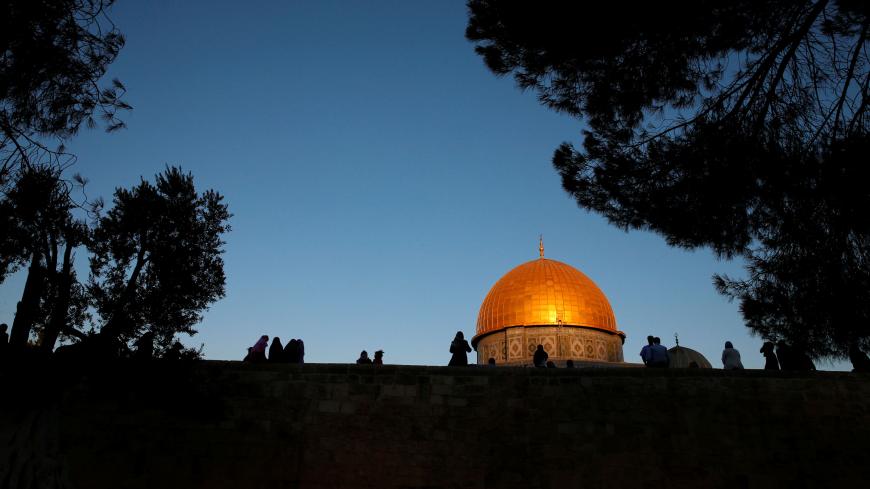 Palestinians are silhouetted as they walk in front of the Dome of the Rock on the compound known to Muslims as al-Haram al-Sharif and to Jews as Temple Mount, Jerusalem's Old City, Sept. 12, 2016. - REUTERS/Ammar Awad

A diplomatic crisis is brewing between Jordan and Israel over the latter’s violation of a long-standing status quo at the Haram al-Sharif compound, or what Israelis call the Temple Mount, in East Jerusalem.

Jordan’s Foreign Ministry summoned the Israeli ambassador in Amman, Amir Weissbrod, on Aug. 18 to protest recent Israeli incursions at Al-Aqsa Mosque in the compound. Jordan called for an immediate halt to Israeli violations, according to Foreign Ministry Secretary-General Zaid Lozi. It also warned against what it said were Israeli efforts to alter the status quo at the holy site.

A day later, Jordan’s Lower House of Parliament called on the government to expel the Israeli ambassador, withdraw the Jordanian ambassador in Tel Aviv and to reconsider the 1995 Wadi Araba peace treaty between Israel and Jordan, reported the Jordan Times, quoting the official news agency Petra. Lawmakers also rejected Israeli attempts at the “spatial and temporal division" of Al-Aqsa Mosque and Haram al-Sharif.

Incursions by Jewish extremists into the compound have recurred for months, despite Jordan’s warnings, but the crisis escalated when Israel allowed Jewish visitors to enter the compound Aug. 11 while thousands of Muslim worshippers were celebrating Eid al-Adha. The move resulted in clashes between Palestinians and Israeli police, who fired rubber bullets and tear gas. Dozens of Palestinians and two Israeli policemen were injured, according to news reports.

Jordan’s Foreign Ministry was quick to condemn the violation. “Jordan harshly rejects Israel’s conduct, which only inflames rage and frustration and its provocations of [Muslim] worshippers on the first day of the Feast of the Sacrifice,” a ministry spokesperson said.

But the diplomatic spat continued when Israeli Minister of Public Security Gilad Erdan said that Jewish worshippers should be allowed to pray at the Temple Mount. “We should operate to get to a point when Jews can also pray there," Erdan told an Israeli radio station Aug. 14. "But we need to achieve it through political agreements, and not by force."

The status quo at the compound, preserved since the Israeli occupation of East Jerusalem in 1967, allows visitors but limits worship to Muslims only. Jordan has a special role as custodian of Muslim holy places in East Jerusalem under the peace treaty, and administers the compound through the Ministry of Awqaf.

But over the past few years, the Israeli government has allowed Jewish visitors, including Cabinet ministers and religious extremists, to enter the site under police protection. Some of these groups openly call for the destruction of Al-Aqsa Mosque to build a Jewish temple in its place. The compound has become a flashpoint between Palestinians and Jews, but, more importantly, it weighs heavily on ties between Israel and Jordan.

In October 2015, former US Secretary of State John Kerry reached an agreement between Jordan and Israel wherein the Israeli government reaffirmed its commitment to upholding the status quo at the compound. The agreement also stipulates that visits by non-Muslims are prohibited on Fridays and Muslim holidays. Allowing Jewish visitors to enter the site on Eid al-Adha was a clear violation of that agreement.

Jordan’s supervision of the compound has become a sensitive issue for King Abdullah, especially under the Donald Trump administration, which is working on a controversial peace deal. In March, the king announced his rejection of any deal that undermines Jordan’s role in Jerusalem. He also stated that he was under pressure to alter his country’s historic role as custodian of the Jerusalem holy sites. There have been reports that Saudi Arabia was looking to replace Jordan as custodian of Haram al-Sharif under Trump’s peace deal, but officially Riyadh still supports Jordan’s role.

While Jordan’s parliamentary recommendation to expel the Israeli ambassador and revise the peace treaty with Israel is not binding, it underlines the rising tension between the kingdom and Israel. In October, King Abdullah announced that Jordan was terminating annexes to the peace treaty that allowed Israel to use Jordanian lands under a 25-year lease that ends this year. Amman rebuffed Israeli attempts to renegotiate the deal.

Jordan’s Foreign Minister Ayman Safadi told lawmakers Aug. 18 that Jerusalem was a “red line” for the king and that Jordan is addressing the continuous Israeli provocations against Al-Aqsa Mosque and Haram al-Sharif. But since then, there have been renewed calls by extremist Jewish groups to enter the compound. How far Jordan is willing to go in response remains to be seen.