Why Syria's opposition council is opening offices in FSA-held areas

The National Coalition for Syrian Revolutionary and Opposition Forces is opening offices in the Free Syrian Army-held areas to obtain the support of the people who believe such an institution to be a failure. 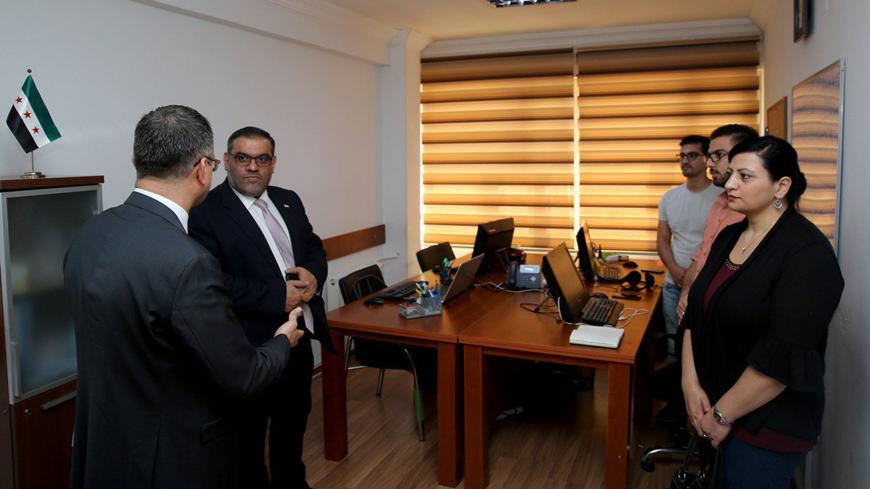 Anas al-Abdah, the president of the National Coalition for Syrian Revolutionary and Opposition Forces (SNC), visited July 4 the FSA-held northern Aleppo countryside, accompanied by Mustafa and other SNC members.

Speaking to the press at the SNC headquarters east of al-Rai town, Abdah said, “The SNC is not here seeking any authorization. Rather it seeks to build a genuine legitimacy and gain confidence through hard work and by achieving the desired results.”

The SNC’s delegation visited the same day al-Rai local council and the town's crossing, and said that during the visit they inspected the interim government’s institutions in the liberated parts of Aleppo countryside.

On June 29, the SNC elected its new leadership, namely the president, his deputies and 19 political assembly members for a one-year term. The SNC’s general assembly elected Abdah for the position of SNC president, succeeding Abdul Rahman Mustafa, who in turn was elected June 29 president of the interim government, succeeding Jawad Abu Hatab.

The new changes in the leadership of both the SNC and interim goverment took place at the 46th session of the SNC general assembly held June 29-30 at the SNC headquarters in Istanbul, Turkey.

Abdah was born in Damascus in 1967; he is affiliated with the opposition Islamic movement in Syria. Mustafa is a Syrian Turkmen who was born in Jarablus in the northeastern Aleppo countryside, and is a co-founder of the Syrian Turkmen Assembly where he held several leading posts in 2012-14.

Speaking to Al-Monitor on condition of anonymity, a member of the SNC said, “The new SNC leadership developed clear action plans, including internal reforms and building a true legitimacy that would allow them to take difficult decisions and hold on to its principles.”

He said that the SNC has a serious task ahead under the current circumstances and limited control of the FSA to parts in the northwest of Syria in Idlib governorate and its surroundings. Thus, the SNC is required to make additional efforts to be the political representative of the opposition against the regime and its allies, he added.

The SNC was founded on Nov. 11, 2012, in Doha, Qatar, as an umbrella organization encompassing the entire opposition against the Syrian regime. Yet since its inception, the SNC has been lambasted for its political performance, for not including all of the opposition poles and for not deriving its legitimacy from the Syrian street. The criticism and accusations were leveled by opposition circles, particularly the FSA factions that have not perceived the SNC as their real political representative.

By opening offices in Aleppo countryside, the SNC is trying to win the support of the opposition street, and subsequent legitimacy it misses.

Ahmad Barhou, a media activist in Afrin in Aleppo countryside, told Al-Monitor, “The new SNC leadership will not bring about much change to the work of this opposition institution that has proved to be a failure since its formation in late 2012. One can hardly say that the SNC and the interim government represent the entire Syrian opposition, given that the Muslim Brotherhood are nearly totally controlling them.”

Yafa al-Hamawi, a media activist, told Al-Monitor, “The SNC moving its headquarters to the FSA-held areas in Aleppo countryside will not make people change their opinion about this failed institution.”

She added, “We know exactly what the SNC is planning on by moving its headquarters to Syria, after working for years from Istanbul. It is seemingly seeking to be present in the opposition-held areas to be able to gain a missing legitimacy, which I don't expect to happen. Unfortunately, we have no political institutions that can be relied on before the international community.”

Speaking to Al-Monitor, deputy head of the political corps in Idlib Mohammad Chakib Khaled, said, “The SNC’s presence in an area controlled by Turkey and its allies reflects the reality of this entity as an entity imposed by the power of the Turkish ally alone.”

Khaled said, “One cannot say that the SNC represents the revolution. Large-scale internal reforms are required in order for the SNC to promote and enhance its political performance. These reforms would include adopting the bylaws that would govern its work.”

He added, “It is inconceivable that the SNC still lacks a work mechanism seven years after its inception. Also, many of its members need to be replaced with new ones, mostly from the rebel groups, FSA factions and popular figures [in the FSA-held areas]."