The Pentagon’s Special Operations Command is planning to study the impacts of the 17-year war on terror in the Middle East on the force. 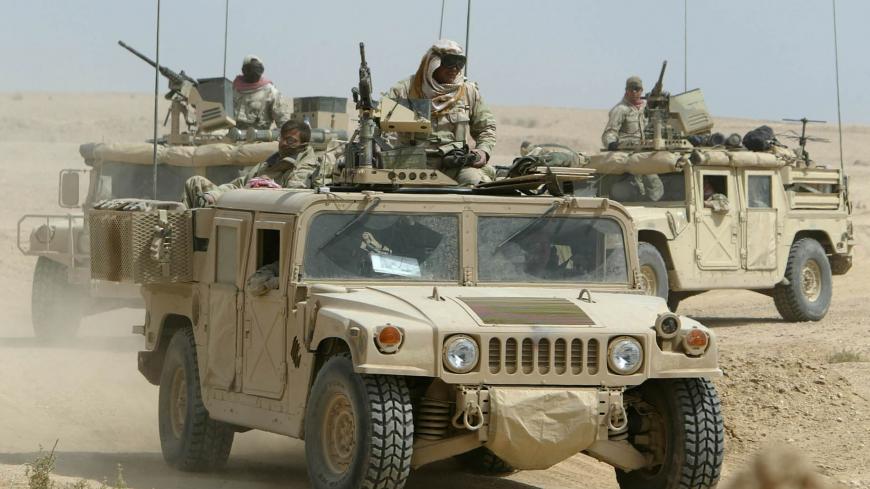 US Army Special Forces sit on top of their Humvees as they secure important ground in the south of the city of Najaf in central Iraq, March 23, 2003. - REUTERS/Kai Pfaffenbach

The Pentagon’s Special Operations Command — known as SOCOM — is looking into how brain trauma from the 17-year war on terror in the Middle East has impacted elite US troops.

First led by former SOCOM chief, Gen. Tony Thomas, the command is examining whether trauma suffered by special operators, including brain fatigue and abnormalities in the visual cortex, impact the ability of elite troops to make snap decisions in the field.

The program includes an eight-year effort by the US Army’s Special Operations Command to conduct neurological testing on its troops, supported by the National Football League and the University of North Carolina, to establish a baseline to treat mild traumatic brain injuries, according to military officials and documents reviewed by Al-Monitor.

SOCOM is still looking for more funding to draw finite conclusions from its findings. But as the Donald Trump administration looks to turn the US military’s focus away from the Middle East, former officers say repeated special forces rotations into Iraq and Afghanistan have led to increased stress on elite American troops.

“What I saw over the years of successive deployments was kind of a weariness,” a former special forces commander, speaking not for attribution, told Al-Monitor. “Human beings have finite capacity to process all of that trauma and violent experiences they accrue on deployment after deployment,” he added, describing “greater stress” on troops he served with in Iraq and Afghanistan, such as divorces, dependency on alcohol and misconduct after coming home.

Over the past eight years, the Army’s Special Operations Command has scanned a 350-soldier cohort to establish a baseline of neurological impacts from combat to compare with other troops. The command says it is asking for another $1.25 million to expand the effort to more special operators and airmen.

Lt. Phil Chitty, a SOCOM spokesman, said findings include “physical changes” to portions of the brain’s visual cortex that showed up on MRIs, and light defects suffered by soldiers, revealing “a possible link” between multiple traumatic brain injuries and impaired vision or brain function.

Congress has already demanded increased reporting on the impacts of the Carl Gustaf recoilless rifle after a study by the Center for a New American Security, a Washington think tank, cited evidence that significant blast impacts from the anti-tank weapon have been linked to traumatic cognitive effects. The former commander said that units that did multiple deployments utilizing the Gustaf or got hit with improvised explosive devices had acute impacts on their cognitive skills.

In the wake of that study, then-SOCOM commander Gen. Thomas signed off on a mass surveillance program for the entire cohort of special forces in February designed to gather information on how subconcussive head impacts harm the attention, reaction time, memory and other attributes of special forces on the battlefield. The Pentagon hopes to improve the early detection of brain trauma through the effort, starting with computer-based assessments and interviews of elite troops.

Paul Scharre, a senior fellow at the Center for a New American Security and a retired Army Ranger who co-authored last year’s study on the Gustaf anti-tank weapon, said that immediate negative effects of mild brain trauma can “resolve themselves,” making it unclear how repeated exposure “causes lasting damage over time.”

To that end, the Pentagon spent nearly $116 million in fiscal year 2017 to investigate brain injury and psychological health across the US military, according to reports sent to Congress, including efforts to deal with blunt force trauma from soldiers’ helmets, a study on the impacts of low-level blast exposure to special operators, and the development of predictive models for brain injuries.

The Department of Veterans Affairs also maintains a brain bank with more than 200 samples, according to a Defense Department review delivered to Congress in January. The Pentagon has invested more than $2.5 million to develop a mobile ultrasound system to better evaluate brain injuries in the field. The University of Michigan is also looking for means to assess neurological injuries through eye movements.

But the problem is particularly acute for the special operations community, which faces more exposure to harmful blasts and other combat risks.

"The special operations community is most exposed to this risk, in both combat and training,” said Scharre. “There’s a lot of exposure that special operators are going to get in training that your average marine or army infantry is not going to get. This could be even higher in combat."