The Palestinian president’s decision to suspend all agreements with Israel comes after years of calls by the PLO’s Central Council to end security cooperation with Israel, but does he mean it? 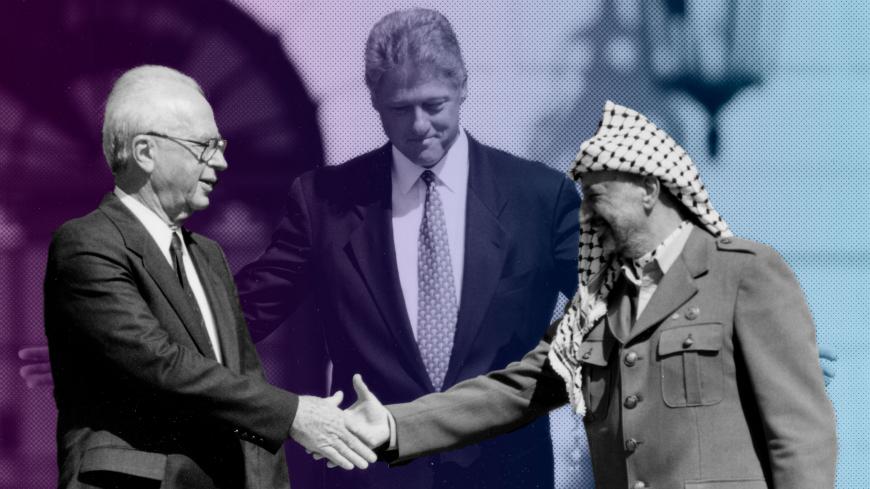 Palestinian President Mahmoud Abbas’s surprise visit to Jordan and meeting with King Abdullah II on July 24 telegraphed that an important decision was about to be made. The king had just returned from a long vacation in the United States, and Abbas was under a lot of pressure to respond to the demolition of tens of Palestinian homes in Sur Baher, on the outskirts of East Jerusalem, west of the separation barrier, on July 22. Many of the demolished homes had been built in Area A, designated by the Oslo Accords (Declaration of Principles) as under the direct administrative and security control of the Palestinian Authority (PA).

Since March 2015, the PLO’s Central Council has been calling for the Oslo-created PA — established by the PLO in cooperation with Israel to administer Palestinian-controlled areas — to end to security coordination with Israel, perhaps the most important aspect of the agreement from Israel’s point of view.

On July 25 in a clearly made-for-TV event, Abbas announced the suspension of agreements with Israel. The call was sent out for the top Palestinian leaders, including members of the PLO Executive Committee and other leading members, Fatah's Central Council and senior government officials, to gather at the Muqata for a public statement by Abbas.

“We announce the leadership's decision to stop implementing the agreements signed with the Israeli side,” Abbas said, addressing television cameras and those gathered at his Ramallah headquarters. A committee will apparently be created to implement the decision, but no additional specifics were offered.

When some on social media questioned whether the decision covers security coordination, Abbas reiterated his statement from earlier in the day, tweeting at 11:00 pm in both English and Arabic, “For confirmation: We declare the cessation of all agreements signed with #Israel, including security coordination.”

“The decision is meant to be a warning to the Israelis after they destroyed homes in areas under the direct responsibility of the Palestinian government,” Rantawi said. “He was under a lot of public pressure to do something, and he had to do something dramatic.”

Diana Butto, a former legal adviser to the Palestinian negotiating team, told Al-Monitor that if Abbas were serious, he would have released Palestinians arrested under Israeli orders and being held in PA jails, as Oslo provides.

“There are many obligations on Palestinians as part of this accord as well as benefits,” Butto remarked. “Palestinians get passports, travel permits including VIP treatment and water allocation, but in return they have obligations toward Israel.”

On the matter of Palestinian passports, Walid Batrawi, a media trainer in Ramallah, copied and pasted to his Facebook page the inside cover of a Palestinian passport, which states in Arabic and in English, “This passport/travel document is issued pursuant to the Palestinian self-government agreement according to the Oslo Agreement.”

Nasser Laham, editor of privately owned Maan News Agency, responded to skeptics by recalling the various times when Abbas made statements and then stood by them.

“Intellectuals don’t trust that the president will carry out the decision, just like they didn’t believe he would stop all relations with the US,” Laham wrote in the column “Me and My Enemies,” a biblical reference to the mighty Samson. “Implementing this decision involves making people aware that the Oslo agreement is no longer needed by the Palestinians. The Shtayyeh government has begun just that by attempting the very difficult job of overcoming political, economic and security dependence, an effort that will take a long time and will be based on the concept of [me and my enemy].”

Later, Laham, speaking on the Maan TV program “Al Hasad” on July 27 said that although totally disengaging from agreements with Israel is impossible, what Abbas did was important. “Maybe the Shtayyeh government will not be able to abrogate the agreements, but we will sooner or later get a Palestinian government that will, and they will refer to this important decision made by President Abbas,” he asserted.

The Israeli government, totally engrossed in the lead-up to elections on Sept. 17, took little notice of the decision, while Hamas issued a written statement of public support for Abbas’s move.

It is not yet clear whether the reality that fell over Palestinians a quarter century ago in the form of the Oslo Accords will continue to survive. The agreement, since that famous handshake on the White House lawn between the PLO's Yasir Arafat and Israel's Yitzhak Rabin in 1993, is the only written document attempting to regulate relations between the occupied and the occupier. Scrapping the accords without an alternative would be to venture into unchartered territory.

No policy decision will be made by Israel until after the elections and the formation of a new government. Meanwhile in Washington, the pro-Israel administration of Donald Trump is hardly able to bring about any logical change in the current status quo.

Abbas’ declaration might have ramifications in the long term, but it is unlikely to change anything so long as the president himself needs to coordinate with Israel to leave his house and get anywhere within or outside of Palestine.