Hamas politburo Chief Ismail Haniyeh said Hamas does not oppose the creation of a Palestinian state along the 1967 borders in a gradual manner, but insisted on not recognizing Israel. 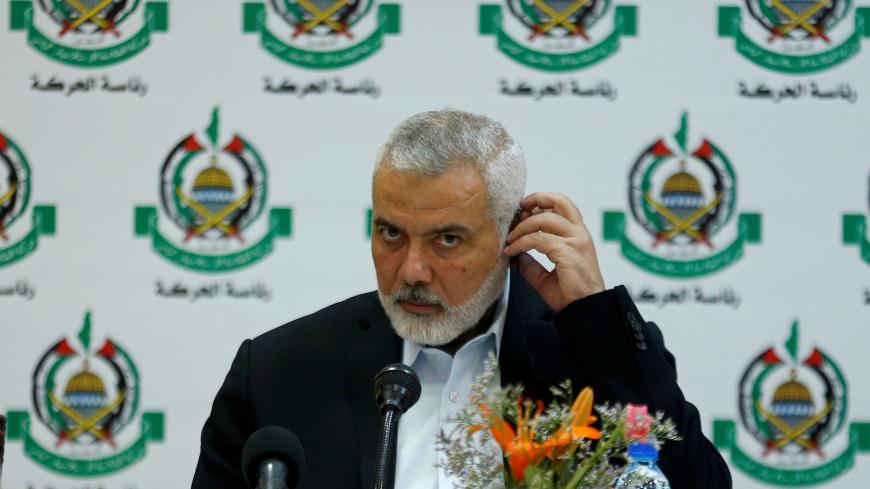 GAZA CITY, Gaza Strip — Hamas politburo Chief Ismail Haniyeh said Hamas does not oppose the creation of a Palestinian state along the 1967 borders in a gradual manner, but Hamas insists on not recognizing Israel, stressing that the Palestinian resistance has missiles that can hit any target in Israel.

“Hamas is not opposed to the establishment of a Palestinian state along the 1967 borders, but we remain steadfast in not recognizing the Israeli occupation on the rest of the Palestinian territories,” Haniyeh said during a conference call with Turkish journalists organized by the Palestinian Association of Communication and Information in Istanbul July 20.

Hamas spokesman Hazem Qassem told Al-Monitor that “Haniyeh’s statements are not something new as they are in line with Hamas charter, which is the basis of the movement’s political speech.”

The movement’s charter, which was issued in May 2017, 30 years after its inception, said the Gaza group will not give up any parcel of Palestinian land and will continue to strive to liberate all of the Palestinian lands. The group vowed not to recognize Israel and to negotiate an independent Palestinian state with Jerusalem as its capital as the basis for a deal with Israel.

Qassem explained that Haniyeh was trying to draw to the attention of the world the fact that Israel is the cause of unrest in the region that has been promoting wars and not the Palestinian people struggling under occupation. He stressed that Hamas is not against any diplomatic or political solution to the Palestinian issue.

“This is the normal discourse of the movement and it does not necessarily have any specific implications,” Qassem said.

Regarding the group’s conspicuous threat to fire missiles toward Israel, Qassem said this is Hamas' rightful response should Israel attack the Palestinian people and their rights.

Hussam al-Dajani, a professor of political science at Al-Ummah University in Gaza, told Al-Monitor, “Haniyeh made these statements to remind the world that the movement is not seeking to disrupt the political process and is ready to be part of a political system at the national and international levels, if a Palestinian state is recognized alongside the 1967 borders.”

“This reflects the group political maturity, upholding the national strategic vision, which is the common denominator among Palestinian factions. Hamas is trying to present and promote itself as part of a solution, not the problem,” Dajani said.

He explained that Haniyeh’s statements have a political indication that the Palestinian people are united, especially since the PLO has long stated that it does not oppose the establishment of a Palestinian state on the 1967 borders. This is not to mention the movement’s visit to Moscow earlier this year, which confirmed its rejection of the US Mideast plan known as the deal of the century.

Dajani also noted that Hamas is trying to send out a message that it is a pragmatic group, seeking to achieve peace, calm and establishing a state and not to go to war with Israel, as the latter is trying to present it.

He also explained that Haniyeh’s mention of the missiles was meant to say that the movement has a trump card up its sleeve (in case of an Israeli attack).

“With its new 2017 charter, which was a moderation of the movement’s position, Hamas expected the world to stop viewing it as a terrorist group and remove it from the list of terrorist organizations. I think the international community should pick up Hamas' message because, otherwise, a negative response would strengthen the radical group within the movement, which seeks a Palestinian state all over the Palestinian territories. This radical group is already feeling frustrated by the lack of international response by Hamas’ moderate stances,” Dajani said.

On the possibility of Hamas negotiating directly with Israel in the coming period, he said, “Negotiations are not a political luxury for Hamas; if negotiating would guarantee an agreement on establishing a state, then the movement would take this step.”

“However, the PA’s bad experience in direct negotiations without any results prompts Hamas to stick to indirect talks,” Dajani concluded.

Meanwhile, political analyst Hani Habib told Al-Monitor that “this statement did not bring anything new to the table. This is what Hamas already mentioned in its 2017 charter. Hamas does not recognize Israel on the Palestinian territories. By stating that Hamas has long-range missiles, Haniyeh is sending a message that they want to liberate the entirety of Palestine.”

“This statement is a form of political tactic required in the current situation, especially in light of the uptick in Israeli settlement building in the West Bank. I don’t think Hamas would go for direct negotiations with Israel at this point. Plus, Israel is not ready to make any concessions to Palestinians,” he concluded.