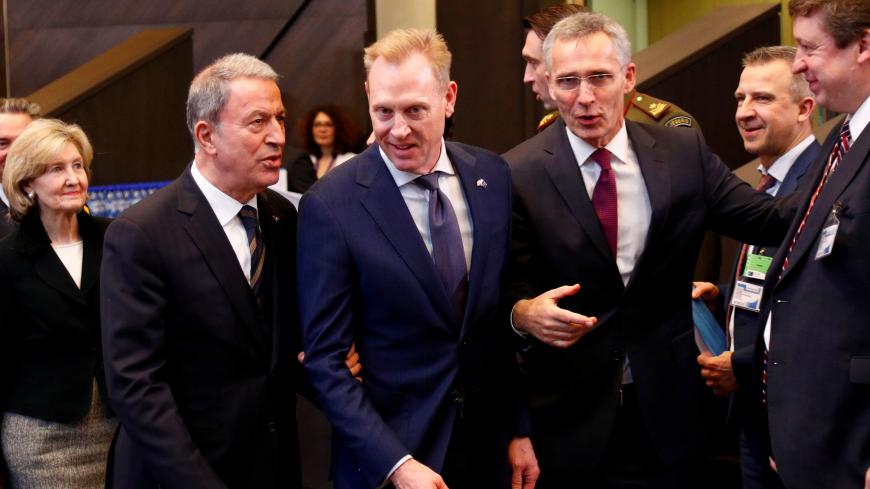 Turkey and the United States are on a collision course over Ankara’s decision to buy Russian-made S-400 anti-missile defense systems. The question is how this will affect Turkey’s relationship with NATO, of which it has been a member for the past 67 years.

For over a year now, American neocons, in particular, have been pushing the notion of expelling Turkey from NATO over its efforts to develop military ties with Russia.

They argue that Ankara’s cozying up to Moscow puts its adherence to NATO’s core principles into doubt and makes it more of a foe than an ally. President Recep Tayyip Erdogan’s blatantly anti-American rhetoric has merely added grist to the mill of those who think along these lines.

This hard-line position has its counterpart in Turkey too, especially among ultra-nationalist circles. These maintain that NATO membership has lost its meaning for Turkey because it no longer provides support to Ankara against its mortal enemies.

The relationship that key NATO members like the United States and France have cultivated with the Kurdish People's Protection Units (YPG) in Syria is the main driving force behind this argument.

Ankara considers the YPG to be a terrorist organization linked to the outlawed Kurdistan Workers Party that poses an existential threat to Turkey’s unity.

Erdogan’s unofficial coalition partner, Devlet Bahceli, who heads the far-right Nationalist Movement Party, is among those heading this chorus. He declared last week that the time had come to question Turkey’s NATO membership.

Bahceli was responding to a letter by acting US Secretary of Defense Patrick Shanahan to his Turkish counterpart, Hulusi Akar, which nationalist Turks, in particular, have castigated for what they consider to be its “threatening” tone.

Shanahan warned that Washington would not only withhold the delivery of advanced F-35 fighter jets to Turkey if it went ahead with the S-400 deal, but it would include other punitive measures that would have dire consequences for Ankara.

During a public address in Istanbul last week, Bahceli said this letter should be returned to sender posthaste, adding that “NATO is not the US’ backyard, iron fist or toy.”

“However, if that is the case, then Turkey has to immediately start questioning all its international connections, starting with NATO, that operate in a one-sided manner and result in dependence and entrapment, and end its dialogue with these formations,” Bahceli said.

Washington argues that the S-400 and the F-35 are rival systems designed to listen in on each other and says Turkey cannot put them under the same command since this would jeopardize NATO assets.

Turkey counters by saying the S-400s will be used only for national defense requirements and indicates that it will guarantee these do not pose any threat to NATO assets. Turkey has also proposed a joint Turkish-American commission to verify this.

Washington has rejected both Turkey’s assurances and its proposal for a joint commission. Meanwhile, neither side has shown an inclination to climb down from its position.

Sober minds on both sides of the fence, however, caution against talk of expelling Turkey from NATO or Turkey’s leaving NATO of its own volition.

Simon A. Waldman, a visiting research fellow at King’s College London, stressed there is nothing in NATO’s founding document — the North Atlantic Treaty — that pertains to the expulsion of a member or any precedent to this effect.

This does not mean, however, that Turkey will have an easy time in NATO even if it can’t be expelled or decides to remain in the alliance.

"In short, Turkey cannot and will not be formally expelled from NATO. However, upon its receipt of the S-400s, it will no doubt find itself increasingly isolated inside NATO’s civilian and military bodies,” Waldman maintained.

He went on to underline that Turkey could end up being a member of the alliance in name only.

Retired Ambassador Suha Umar, who spent many years dealing with NATO affairs, agrees that the S-400 purchase is likely to create problems in NATO for Turkey.

“There is no one in NATO who shares our views on this matter. Technically speaking, the S-400 is not compatible with NATO systems. It is also considered to be contrary to the alliance’s plans on responding to threats, and there is some truth in this,” Umar told Al-Monitor.

Nevertheless, it is noteworthy that NATO officials or individual NATO member states have been reluctant to vocally echo the hard-line American position regarding Turkey’s S-400 purchase.

Defying calls for Turkey to be expelled, NATO’s Secretary-General Jens Stoltenberg has even thanked Turkey for its contribution to the alliance and emphasized that NATO stands in solidarity with Turkey.

Speaking at a press conference with Turkish Foreign Minister Mevlut Cavusoglu during a visit to Ankara May 6, Stoltenberg cited Turkey’s contributions to NATO missions in Afghanistan and Kosovo as examples of its active contribution to the collective security of the alliance.

Umar pointed out that NATO is currently in the throes of serious debates about its missions and aims at a time of serious international volatility.

“It is not possible for the alliance to consider the expulsion of a country like Turkey from NATO under these conditions,” Umar said. “But if it comes to that, then it will mean that NATO has become something completely different,” he added.

Umar also conceded, however, that even if it can’t be expelled, Turkey could find itself excluded from key alliance programs. He said the “one-for-all-and-all-for-one” Article 5 of the NATO treaty could also be watered down in Turkey’s case over the S-400 affair.

Gerald F. Hyman, a non-resident senior associate at the Center for Strategic and International Studies and a Global Fellow at the Woodrow Wilson Center for International Scholars, also argued that talk of expelling Turkey from NATO was premature.

In an opinion piece for the National Interest, he accepted that Erdogan’s move away from the alliance has been painful for NATO.

Nevertheless, he underlined that Turkey maintains NATO’s second-largest military after the United States and its military has fought with the US military in Korea and Afghanistan “even when some other NATO members have not.”

Calling attention to the fact that the results of the recent municipal elections in Istanbul showed that Erdogan’s grip on power may be waning, Hyman wrote, “It would serve the long-term interests of the United States and its European allies to watch and wait for a while.”

Regarding Turkish calls to leave NATO, Umar said doing so would result in serious losses for Turkey.

“We are heading for new confrontations in the world that involve the United States, Russia and China. Currently, this is playing out in the economic sphere but could turn into a hot conflict,” Umar said.

“If Turkey left NATO at such a time, which side will it join? It is unrealistic for Turkey to argue that it can meet its own security needs, given that it remains economically weak,” Umar said, adding, “For it to say 'I will join Russia and China in that new world' is equally unrealistic."

Soner Cagaptay from the Washington Institute for Near East Policy, and Andy Taylor, a former staffer in the US Congress covering Turkey, explained in a detailed opinion piece for The Hill why moving toward Russia was unrealistic for Turkey.

“Until the collapse of the Russian Empire in 1917, Turks and Russians fought 17 major wars, which the Turks overall lost. Later on, Turkey’s decision to enter NATO in the 20th century was driven by its fear of Russia,” they wrote.

They added that Russian President Vladimir Putin was happy to sell weapons to Turkey only because this was driving a wedge in NATO.

Ankara, for its part, has said it has no intention to leave NATO. Turkish Defense Minister Akar’s letter of response to Shanahan’s “threatening letter” was also milder than Bahceli and his ultra-nationalist followers would have liked.

A Turkish Defense Ministry statement on June 18 said Akar had “repeated Turkey’s discomfort over the tone and approach, which does not fit the spirit of [NATO] allies and conveyed in detail our known opinion on the issue.”

There was no suggestion in the statement of any proposed retaliation against Washington. The statement merely said Akar had “underscored the importance of continuing dialogue in pursuit of solutions to problems.”