Following several requests made by Iraqi leaders to Pope Francis to visit Iraq, he reveals his desire to come next year. 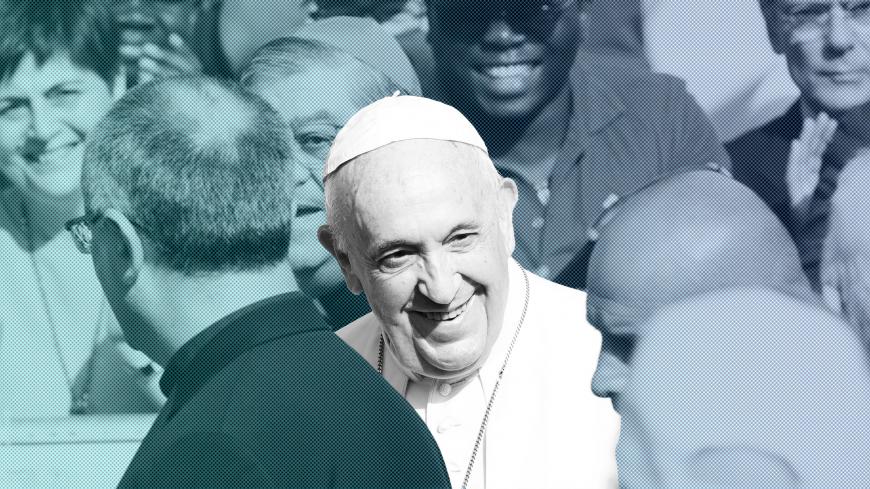 BAGHDAD — Iraqis have been looking at the announcement of Pope Francis’ plan to visit to Iraq next year with various but positive outlooks.

The announcement gained more momentum after Iraqi President Barham Salih's visit to the Vatican in November in which he encouraged the pope to visit Iraq. A year ago, the patriarch of Babylon for the Chaldean Catholic Church, Louis Raphael I Sako, was elevated to cardinal, one more indication that the pope is paying more attention to Iraq and the future of Christians in the country.

The pope’s visit schedule would probably include the historical city of Ur in southern Iraq, which many believe was the birthplace of the Prophet Abraham. As such, it should be an event of profound symbolic significance that affirms the unity of Iraqis regardless of their religious beliefs since Abraham is known as the father of prophets; this commonality in Jewish, Christian, and Islamic narratives shows the exceptional spiritual significance of Ur for all major faiths in the Middle East.

The pope had previously announced his desire to visit Iraq this year. That visit, however, was subsequently held off for security concerns, causing widespread disappointment in Iraq.

The late Pope John Paul wanted to visit the ancient Iraqi city of Ur in 2000, which was the first step of a three-stages pilgrimage to Iraq, Egypt and Israel. However, the visit did not take place as the negotiations with the then Iraqi government under Saddam Hussein rule broke down.

Positive reactions to the pope's intention to visit Iraq next year came from Islamic figures as well as Christian ones.

Shiite Muslim leader Jawad al-Khoei, head of the Najaf-based Al-Khoei Institute, said the pope's visit would be historically significant and would serve as a supporting element for peacemakers and those involved in the Islamic-Christian dialogue in Iraq. Khoei stressed that religious leading figures who advocate for peace and love, whether Muslim or Christian, must work together.

Khoei, the grandson of Abu al-Qasim al-Khoei, who was the world’s highest spiritual Shiite authority, said he would love it if the pope visited Najaf, the Shiites' Vatican in a sense, and met Ayatollah Ali Sistani. Khoei believes that both Sistani, Shiite Islam's highest authority, and Francis, the head of the Catholic Church, have a lot in common in the sense that they both wish to establish world peace, in addition to holding top religious posts.

Khoei said a case can be made for the similarities between the Vatican and Najaf. “I hope to see Pope Francis walking around in the streets of Najaf and visit ayatollahs in their humble homes,” Khoei concluded. “This [humility] is a trait that the pope has as well. He has been known for his humility compared with his predecessors.”

Abdul Wahhab al-Samerrai, the head of Abo Hanifa Mosque in Baghdad and a member of highest Sunni council in Iraq, told Al-Monitor, “We Iraqis all believe that the pope's visit to Iraq has several messages. First, it is spiritual support from the highest Christian leader to all Iraqis, including Muslims, after the very difficult situation Iraq went through in the past. Second, it is a great contribution to our experience of coexistence and religious tolerance. Third, it is a message to the world that Iraq is progressing significantly and it is full of kindness and generosity among its all components, including Christians and Muslims.

“Christians are the history of Iraq. They were here in Iraq before Muslims,” Samerrai said, also expressing his hopes that “the pope allocates time for meeting with the Sunni religious leaders in Baghdad.”

Meanwhile, some high-ranking religious Christian sides are being tight-lipped about their efforts in preparation for the planned 2020 visit, part of a strategy that has to do with the security requirements for the trip.

Sako said, “It’s premature to reveal the details of the visit and the preparations. That said, it is certainly a sign of hope for Iraq in particular and the region in general at this turbulent time for Christians in Syria, Iraq, and other areas in the Middle East.”

There also was a great deal of interest about the visit in Iraqi Kurdistan. Leading Kurdish figures have visited the Vatican — including Massoud Barzani when he was president of the Kurdistan Regional Government (KRG) and his successor, Nechirvan Barzani, when he was prime minister — as part of a major diplomatic effort to build relations with the Holy See.

Khaled al-Bir, a top official in the KRG's Ministry of Endowments and Religious Affairs, told Al-Monitor, “The request made to the pope to visit the region has been extended by the collective of the Kurdish political leadership during their visit to the Vatican, as well as the region’s representatives in the Vatican and from me personally on multiple occasions in my meetings with the pope.”

Bir said that should the visit to the Kurdistan Region come to pass, it will be a “historical event,” especially after the region welcomed internally displaced persons from different religious minorities, including 138,000 Christians who fled to the region’s provinces after Islamic State (IS) raided Mosul and the Ninevah Plains, where displaced Christians have recently started returning. The visit could have profound implications on the Christian presence and its status in its historical areas that saw horrors perpetrated by IS during the time the group was in control of Nineveh province.

Some see Iraq playing a role as a hub for an important religious debate in the region. The country is facing deep ethnic divisions in light of the sectarian politics in the Middle East in recent years, the heavy legacy of the Arab-Israeli conflict over the decades and the threats Christianity faces in the region following the IS invasion of Syria and Iraq.

The Rev. Fadi Du, a Maronite Catholic who heads the Lebanon-based Adyan Institution, told Al-Monitor, “Encouraging the pope to visit Iraq has been the fruit of regional and national efforts in coordination with all stakeholders. Especially in Vatican circles. This stems from our conviction in Lebanon and Iraq, as well as other states in the area, of the importance of the diverse social fabric in the Middle East, particularly in Iraq, the birthplace of all Abrahamic faiths. This also asserts Iraq’s role as a hub for religious, ethnic and linguistic openness in the area, and to eliminate the image associated with it as a diversity-averse country, which was the result of IS actions.”