Former IDF Chief of Staff Gadi Eizenkot warns that sanctions and despair may soon generate an outburst of violence in the West Bank. 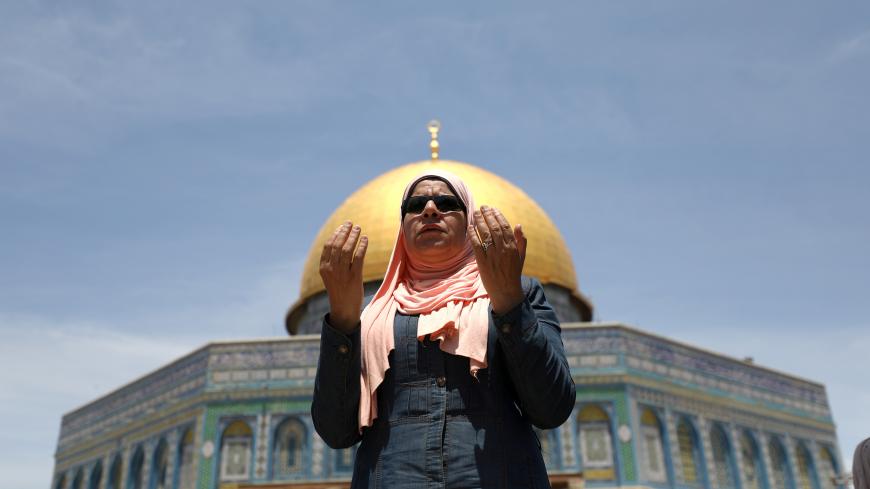 A Palestinian woman prays on the first Friday of the holy fasting month of Ramadan, on the compound known to Muslims as the Noble Sanctuary and to Jews as the Temple Mount, in Jerusalem's Old City, May 10, 2019. - REUTERS/ Ammar Awad

What was considered until a few weeks ago an “estimate with high likelihood” by the Israeli security establishment has turned more into a certainty in the last few days. Experts say that unless necessary, immediate, and substantive steps are taken, a violent conflict with the Palestinian Authority is unavoidable. Former army Chief of Staff Gadi Eizenkot expressed this concern in a May 7 conversation in Washington with President Trump’s envoy to the Middle East, Jason Greenblatt. “The West Bank could erupt before, during or after the presentation of the American peace plan,” Eizenkot warned Greenblatt, according to a report on Channel 13, and “from the moment the genie is out of the bottle, it would take five years to get it back in.”

In other words, Eizenkot, who ended his term four months ago and is now working at the Washington Institute in the American capital, warns of an outbreak of an extended intifada. According to the report, the situation in the West Bank is “combustible and sensitive,” among other things, as a result of the American cut to foreign aid to the Palestinian Authority and the refusal of Palestinian President Mahmoud Abbas to accept the authority’s tax revenues collected by Israel since Israel started deducting from them stipends paid by the authority to Palestinian prisoners.

The Palestinian Authority has been in a serious financial crisis for some time. Authority employees, including security services personnel, have been receiving only half of their monthly salaries lately and many of them cannot meet their financial commitments. Thus, many Palestinian families face imminent financial collapse, pressure is mounting and despair is felt in every corner of the West Bank, especially now during the month of Ramadan. After Eid al-Fitr, which takes place June 4, President Donald Trump’s "deal of the century" is expected to be presented, which apparently includes a promise to invest hundreds of millions of dollars in Palestinian infrastructure and welfare institutions. But it appears that this won’t stop the fury and anger on the Palestinian street at Israel and to a great extent at the Palestinian Authority headed by Abbas, whose popularity among Palestinians is at an unprecedented low. All this puts in doubt the Palestinian Authority’s ability to sustain itself and not to collapse within a short time. The Israeli security establishment’s estimates that such a cataclysmic occurrence will happen grow more certain every day.

What is Israel doing to prevent all this? Close to nothing. At one time official Israel lauded every move Trump took to cause economic damage to the Palestinians — starting from ending aid to the United Nations Relief and Works Agency for Palestine Refugees to the cut in aid to Palestinian security mechanisms. While the Israeli security establishment warned repeatedly that an economic crisis could destroy the Palestinian Authority, the government did not listen. Instead, it rushed to advance legislation that would deduct monies from Palestinian tax revenues, ignoring the dangerous ramifications of the move.

Now the moment of truth has arrived. As was reported in Al-Monitor last week, Israel tried to encourage the Qataris to invest in the West Bank and not just in Gaza, and the Qataris responded and promised extensive aid for infrastructure and job creation for Palestinians in the West Bank. But there is a long road before these plans can come to pass. In the meantime, the crisis is here and any small spark could ignite a fire.

Prime Minister Benjamin Netanyahu’s new government, which has not yet been formed, will probably espouse an anti-Palestinian stance. Knesset member Bezalel Smortich and his colleagues in the United Right party and designated defense minister Avigdor Liberman would prevent Netanyahu from taking courageous steps to rescue a man, Abbas, they so hate. In this situation, the security establishment remains alone in the battle, with little chance of changing the reality on the ground. All that remains to do is to prepare for what’s to come, and to prevent, as far as is possible, any unnecessary friction between Israelis and Palestinians that could spark the outburst.

The Israel Defense Forces has recently decided to augment its presence in the field, especially at West Bank checkpoints, and to equip troops with riot dispersal gear. The police decided to prevent the entry of Jews to the Temple Mount compound on Jerusalem Day this year, which will take place June 2. This year Jerusalem Day coincides with the Ramadan fast, and friction between Jews and Muslims at such a sensitive and combustible place could be dangerous. Fearing a conflagration, the police are also considering limiting the route of the Israeli right’s flag march that takes place every year in Jerusalem’s Muslim Quarter.

These decisions could still change. A petition against the police has already been submitted to the High Court, and at the same time members of the Knesset from the United Right party and members of the Jewish Power faction, such as the provocative protester Itamar ben Gvir, will certainly pressure Netanyahu to allow Jews into the Temple Mount and to hold the flag march without restrictions. Indeed, Netanyahu might easily give in to them. In such a situation, the security establishment would find itself helpless in the face of the right-wing extremists who see actions to prevent a security escalation as capitulation to terrorism.

“We feel the pressure keenly,” a Palestinian security source told Al-Monitor on condition of anonymity. He said morale among the people charged with keeping Palestinian security is poor: “People are not getting paid, they have debts, they can’t bring home food for their children, their heads and hearts don’t allow them to function as normal.”

He and his colleagues have much criticism for Abbas. According to the source, the Palestinian president has not learned from Hamas leaders how to conduct himself toward Israel. “Netanyahu and his government understand only force. Abbas cooperates with the Israelis and gets slapped every time. He learns nothing. See where it’s brought us,” the source complained.

Senior Palestinian Authority officials say Israel is interested in a limited conflict that would function as a reason or an excuse to impose Israeli sovereignty over the West Bank — in other words, annexation. Although this is a conspiratorial view that doesn’t seem to be based on reality, it attests to the low level of trust between the two sides and the deep Palestinian fear of Israel’s actions in the near future. According to the Palestinian source, Palestinians consider Trump’s plan, even before it has been presented and before they know what exactly it contains, as yet another blow, and as promising no chance for a positive change in their diplomatic, security and economic situation.

As mentioned earlier, Eizenkot said it would take five years to get the genie back in the bottle if major violence breaks out again. From the experience of previous intifadas, each time the genie is bigger and more violent than the one before.