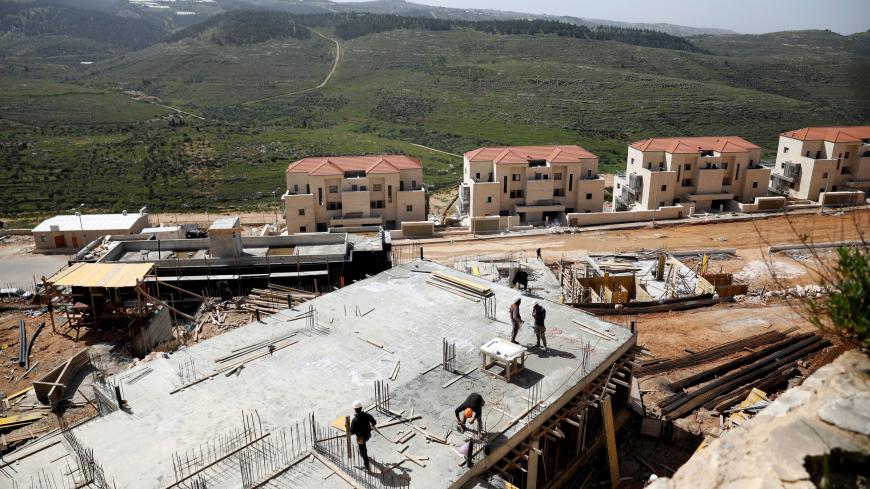 Laborers work at a construction site in the Israeli settlement of Beitar Illit in the Israeli-occupied West Bank, April 7, 2019. - REUTERS/Ronen Zvulun

RAMALLAH, West Bank — Israel's Ministry of Tourism plans to provide grants for investors wanting to build hotels in West Bank settlements — grants amounting to as much as 20% of the total intended investment.

The ministry's decision April 18 followed a meeting with Israeli tourism associations in the West Bank in early 2019, when they acknowledged that Israeli hotels in West Bank settlements can't accommodate a large number of tourists, making it difficult for tourists to travel there for more than one day, TV7 Israel News reported April 30.

The grants will be a major boost for settlements. On April 30, Israel Hayom quoted Israeli Tourism Minister Yariv Levin as saying the grants will help solve the shortage of accommodations for tourists and "strengthen settlements and our hold on Judea and Samaria." The newspaper also quoted Shlomo Ne'eman, head of the Gush Eztion Regional Council, as saying, “This is a step toward imposing sovereignty over Judea and Samaria.”

Meanwhile, Palestinians are acutely aware of likely political developments in the coming weeks. On the one hand, the United States is expected to put forward its plan for peace in the Middle East after Ramadan ends early next month. On the other hand, after forming his government coalition, Prime Minister Benjamin Netanyahu is to announce the annexation of areas of the West Bank to Israel, fulfilling his election promise.

The Tourism Ministry’s announcement did not go unnoticed by the Palestinian Authority (PA). In an April 30 press statement, the Palestinian Ministry of Foreign Affairs and Expatriates warned of Israel's support for settlement tourism as a prelude to colonial annexation.

“These plans fall within the framework of the gradual erosion of the occupied Palestinian territory, in particular Area C, under various security, military, economic, settlement and tourism pretexts, which requires the international community to move urgently to save what is left of the chance to achieve peace on the basis of a two-state solution,” the statement read.

The Foreign Affairs Ministry also warned countries, companies and investors against getting involved in such schemes, saying that it would file lawsuits in national and international courts against anyone involved.

Walid Assaf, head of the Colonization and Wall Resistance Commission, told Al-Monitor that Israel is dealing with the settlements project in the West Bank on political, economic and religious grounds and seeks to remove the settlement issue from any future political solution. He said Israel is imposing a fait accompli by establishing full infrastructure, huge industrial areas and service centers, in an attempt to impose settlements in the West Bank and make them part of Israel.

Assaf pointed out that Israel's grants to investors aim to open tourism and economic prospects for the settlements and to expose them to tourists who may visit them as Jewish land. This tourism project will allow for the possibility of increasing the number of Jewish immigrants, raising employment opportunities and encouraging companies and businessmen to invest there, Assaf added.

On May 1, the Planning Bureau of the Israeli Civil Administration approved building permits for two road bypasses, one near Huwwara in the northern West Bank and the other through al-Aroub road in the southern West Bank. The Israeli Peace Now movement reported May 2 that bypasses will aid settlement development by shortening travel time, which will prompt Israelis to live deep in the West Bank.

While such projects show how Israel is disregarding international condemnation of settlements in the occupied Palestinian territories of 1967, it is still providing legal support to settlements. For example, in November, Israeli lawyers filed suits in the United States against Airbnb after it announced it was taking dozens of houses in the settlements off its lists. Just last month, Airbnb reversed its decision.

The reversal is a “cowardly move that will be another devastating blow for the human rights of Palestinians," Mark Dummett, business and human rights researcher at Amnesty International, said in an April 10 news release.

Economics professor Asi Atrash at An-Najah National University, who holds a doctorate in population studies and labor economy from the Hebrew University in Jerusalem, told Al-Monitor that facilitating settlements aligns with Israel's long-term political strategy of treating these settlements as part of Israel that can't be abandoned.

The decision will provide settlers with jobs within the settlements, and will promote and develop the economy of the settlements. Also, Atrash noted, the announcement strengthens those residents and seeks to attract more of them.

Atrash stressed that the Israeli government Netanyahu is forming will be made up of the Israeli right wing, which declared that its goal is to annex Area C. Thus, Israel's projects are designed to serve that goal by ensuring these settlements stay outside any future political agreement that may occur. They also, however, may mean the end of any hope for a two-state solution and the possibility of establishing a Palestinian state.