Ahead of a planned announcement by Iran's president on reciprocal measures against the United States' withdrawal from the Joint Comprehensive Plan of Action, some of the country's hard-liners are pressing him to fully withdraw from the nuclear deal. 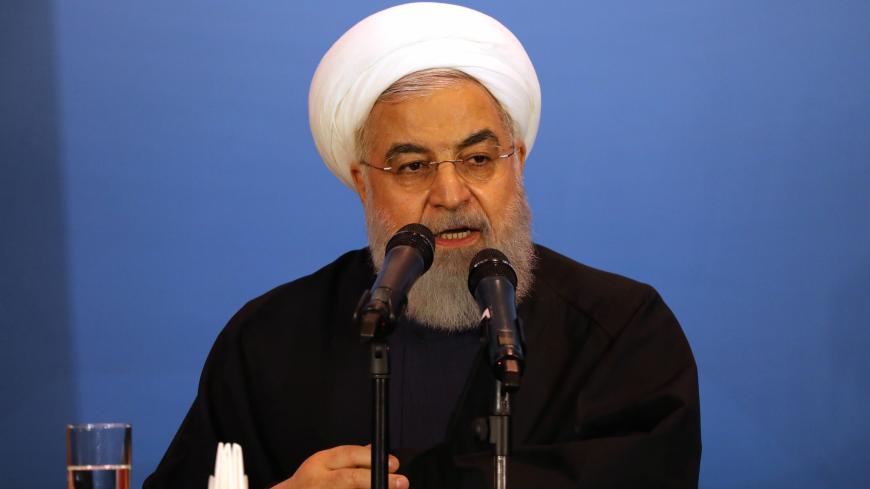 On the anniversary of the US administration's pullout from the Joint Comprehensive Plan of Action (JCPOA), Iran's President Hassan Rouhani is set to announce a series of countermeasures that have been the subject of much speculation in Iran in the past few days.

Rouhani's May 8 televised statement will come against the backdrop of the widespread US "maximum pressure" campaign that targets Iran's oil exports through ending sanctions waivers granted to its leading oil buyers. More specifically and recently, the United States also reduced another set of waivers allowing nuclear cooperation between Iran and the remaining parties to the JCPOA.

"Iran to strike match that will set JCPOA on fire," announced ultraconservative Javan on its front page May 7, referencing a famous speech by the country's supreme leader in June 2016, where he responded to US threats of departure from the JCPOA. Ever since then, however, Iran has been exercising what it calls "strategic patience," a policy aimed at keeping the JCPOA alive. To that end, the Islamic Republic has been negotiating with the European signatories on the benefits owed to Iran under the deal.

But the hard-line camp has repeatedly maintained that pinning hopes on Europe will bear no fruit. Reflecting the voice of the most uncompromising members of the camp, Kayhan has now advised the government to announce "practical measures" and move beyond political statements by making it clear that Iran has no intention of "keeping the deal at any cost." The paper once again criticized the Rouhani government for depending too much on Europe's "empty promises."

Elsewhere, the chairman of the Iranian Parliament's economic commission called on Rouhani to sort things out with the Europeans as soon as possible, describing the European behavior toward Iran as "impudent." And according to conservative pundit Foad Izadi, Iran must send the message that the other side's failure to keep its promises has a price. "One of our problems is that they do not take our officials seriously … which is why they keep mounting pressure."

Rouhani is expected to announce an end to some of the nuclear commitments with which Iran has been complying under the JCPOA, but a full pullout is not an option for now. Other official voices have stated that the any measures will be allowable within the framework of the JCPOA and that Iran will continue to abide by the Nuclear Non-Proliferation Treaty.

Ultraconservative lawmaker Mojtaba Zolnoor has been a staunch critic of Rouhani's government. The cleric, who also chairs the parliament's nuclear commission, suggested that a complete exit is the only option. He believes that reducing commitments does not make any sense when "there is no nuclear deal left behind," saying, "The JCPOA resembles an abandoned house covered by spider webs, with the [Iranian] government the only one staying inside."

However, some inside the Reformist camp oppose not only withdrawal from the JCPOA but also any reactionary measures. "Given the current circumstances, Iran should avoid reciprocal reactions and act with creativity," according to pro-Reform Etemad. "To stay in the JCPOA or leave it is a collective, strategic and extremely sensitive decision that must precisely take into account all calculations without any mistake," Alireza Akbari warned in the editorial.