Giuliani's meeting with Iranian opposition group and Israeli prime minister's tweet about war with Iran gets conference on promoting peace in the Middle East off to problematic start. 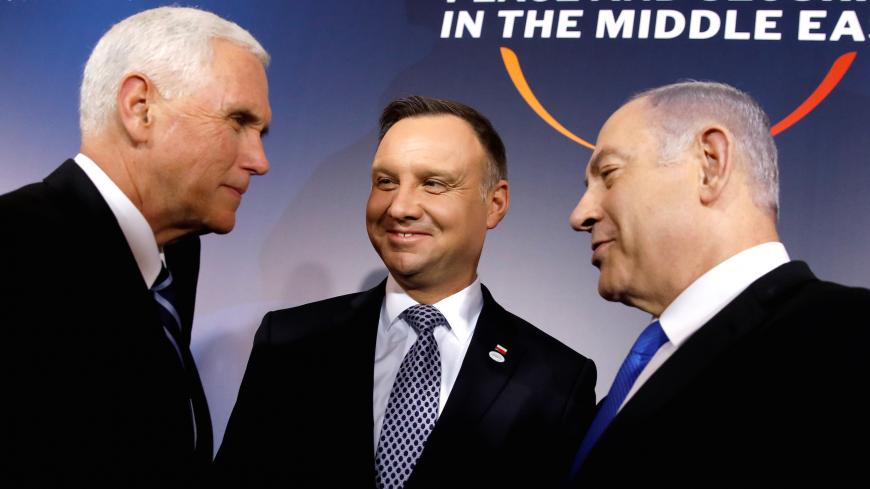 WASHINGTON — An international conference US officials had insisted was not about demonizing Iran got off to an awkward start in Warsaw today thanks to two close allies of US President Donald Trump.

First, Rudy Giuliani, Trump’s personal lawyer in the Russia investigation, called for Iran regime change at a rally in Warsaw of the controversial Mujahedeen-e-Khalq (MEK), an Iranian opposition group until recently designated as a terrorist group by the United States, and widely reviled by Iranians both inside and outside of Iran as a cult that fought with Saddam Hussein during the Iran-Iraq war.

Then, Israeli Prime Minister Benjamin Netanyahu and his spokesman tweeted comments whose English translation said the Warsaw meeting was important for bringing Israel together with Arab countries “to advance their common interest of war with Iran.” Those tweets were subsequently deleted and reposted with the translation of Israeli-Arab common interest being in “combatting” Iran, but not for over an hour from the Israeli prime minister’s official Twitter account.

State Department officials had already had a hard time convincing other allied nations to send their foreign ministers to the two-day supposedly ministerial conference on promoting peace and stability in the Middle East. (Netanyahu also serves as Israel's foreign minister.) In the end, only two foreign ministers came from Western Europe to Warsaw.

British Foreign Secretary Jeremy Hunt came for one day to chair a “quad” meeting on Yemen, with his counterparts from the United States, Saudi Arabia and the United Arab Emirates, along with UN Yemen envoy Martin Griffiths. But Hunt was expected to depart before the proceedings Thursday. France and Germany, the other two European nations that helped negotiate the Iran nuclear deal that Trump withdrew from last year, sent their political directors.

Israel’s Netanyahu was the only head of state who came from abroad to the conference; US Vice President Mike Pence also attended. That made for an awkward “family photo” of the attendees in which the Polish president and foreign minister, Pence, US Secretary of State Mike Pompeo and Netanyahu were some of the only recognizable figures in the front row of some 50 nations’ representatives.

US envoy on Iran Brian Hook, in an interview with the BBC Persian service, said repeatedly that the United States does not have a relationship with the MEK, and said Giuliani does not represent the US government. But the fact that the president’s personal lawyer, as well as his national security adviser John Bolton, are or have been longtime lobbyists for the controversial group has made many other countries wary of the Trump administration’s hard-line policies on Iran and where they are heading.

“I don’t think there’s any hiding the fact that despite the label being changed, the US very much has an agenda here in terms of creating this alliance that is anti-Iran,” Ellie Geranmayeh, deputy director of Middle East programs at the European Council on Foreign Relations, told Al-Monitor.

“The messaging from European capitals has been so clear that they don’t want to be associated with that kind of meeting,” Geranmayeh said. “It’s a big snub that the German and the French foreign ministers haven’t gone. And the only reason Hunt’s going can be put down to Brexit next month and the country being in limbo.”

On the agenda for Thursday, the US undersecretary of the Treasury for terrorism and financial intelligence, Sigal Mandelker, is expected to lead discussions at a special session on finance and terrorism.

“To be honest, even today, speaking to some of the Europeans, they have no clue what is coming out of this tomorrow,” Geranmayeh said. “The impression they had is the agenda is still a mess.”

“I think the US has still been pushing for follow-up working groups to continue on some of these issues,” she said. “But one diplomat said it really depends on how the US handles the discussions in Warsaw. If they really go into full Iran-bashing mode, it is going to be so unhelpful.”

The fact that Trump’s personal lawyer is meeting with the MEK “makes everyone in Europe very skeptical of the intent behind this meeting,” Geranmayeh said.