Iranians react against harsh messages by officials in the United States on the 40th anniversary of the 1979 Iranian Revolution. 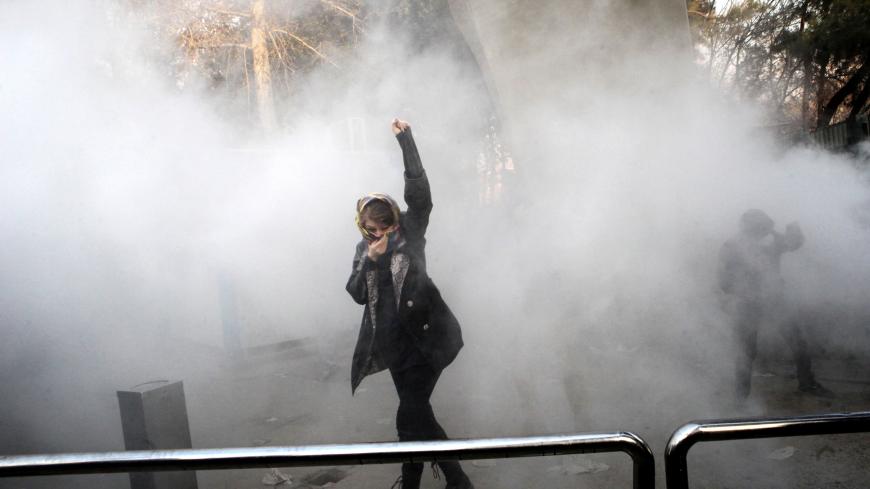 An Iranian woman raises her fist amid the smoke of tear gas at the University of Tehran during a protest driven by anger over economic problems, in the capital city of Tehran on Dec. 30, 2017. - Photo by Yalda Moayyeri (STR/AFP/Getty Images)

Only hours after Iranians wrapped up nationwide marches Feb. 11 marking the 40th anniversary of the 1979 Iranian Revolution — characterized as usual by anti-American slogans — US President Donald Trump came out with his first-ever tweet in Persian, referring to four decades of rule by the Islamic Republic as a period of corruption, repression and terror.

The tweet featured an iconic picture taken from protests mainly over economic grievances that rocked Iran in late 2017 and early 2018. The photojournalist who took the image, 37-year-old Yalda Moayyeri, was quick to react on her Instagram page, slamming Trump for exploiting her work. “It would be a great honor for me if this image would be a symbol of freedom everywhere in the world, but having President Trump use it without my permission in a tweet in Persian … is a great shame for me and causes me deep sorrow,” Moayyeri said.

“Because of his policies, I, my family and my friends are forced to live under sanctions that are devastating our lives,” she added, lamenting the travel ban that has affected ordinary Iranians including herself. “This image shows my people and is for my people," Moayyeri said.

Similar outrage was reflected in numerous social media posts that addressed the US president and his policies toward Iran. "Life had never been this tough and without a [bright] prospect before you took office. So please be kind enough and stop playing sympathizer [with ordinary Iranians]," tweeted Ziaeddin Nabavi, a prominent student movement leader in Iran and a critic of the Islamic Republic who spent eight years behind bars after being found guilty of multiple security charges.

Foreign Minister Mohammad Javad Zarif was the first Iranian official to tell Trump it was high time for him to "rethink" US policy after 40 years of "wrong choices" on Iran.

Speaking of "a glorious dawn" for the 1979 revolution's fifth decade, Iranian papers were filled with admiration for the nationwide rallies on Feb. 11 that ushered in a "new era." The rallies seemed to be one of the very rare occasions crossing partisan lines and uniting Iran's media outlets from across the political spectrum. "This is the face of Iran's Islamic Revolution," wrote Javan, a news site close to the Islamic Revolutionary Guard Corps. The more uncompromising, archconservative paper Kayhan, known for its anti-West editorials, termed the anniversary "the 40th slap, this time on Donald Trump's face."

Trump, US Secretary of State Mike Pompeo and Trump's national security adviser John Bolton were central targets of outrage at this year's rallies. They particularly came under the spotlight after Supreme Leader Ayatollah Ali Khamenei, who rarely makes name references to "enemies," mentioned the trio at a speech last week. In an apparent clarification of the controversial slogan "Down with America," Khamenei stated that the phrase was meant for those three men and not the American people.

Bolton also had a hectic day on social media Feb. 11, underlining the Islamic Republic's "failure" as well as posting a strongly worded video message. "So Ayatollah Khamenei, for all your boasts, for all your threats to the life of the American president … I don't think you'll have many more anniversaries left to enjoy," he said in the one-minute clip posted on the official Twitter account of the White House.

It is not the first time that Bolton has predicted the imminent downfall of the Islamic Republic. In 2017, he told a Paris convention of the Mujahedeen-e Khalq — an exiled Iranian opposition group blacklisted as a terrorist organization by the United States until 2012 — that a change in US policy under Trump will ensure that Iran's "revolution will not last until its 40th birthday.”

The unfulfilled prophecy was alluded to by Zarif as he praised his nation's participation "despite hardships and grievances" in an anniversary that "some in the US wished would never come."

The Feb. 11 rallies were also associated with a wide range of innovative symbolic activities typical of such events in Iran. Demonstrators were handed papers written in the form of court verdicts to issue their own rulings against "enemies," including Israeli Prime Minister Benjamin Netanyahu and Saudi Crown Prince Mohammed bin Salman.

Those maintaining a critical attitude toward President Hassan Rouhani and the 2015 Joint Comprehensive Plan of Action (JCPOA) found the occasion a venue for peaceful protests. Holding pictures of members of the nuclear-negotiating team, they called on them with sarcastic phrases to return the medals they received for a deal with world powers that conservatives increasingly view as a diplomatic failure.

The same discontent was conveyed in a symbolic petition demanding that Iran resume its enrichment of uranium to the level of 20%, which it agreed to forego for years under the deal. The organizers may not have expected the country's atomic chief, Ali Akbar Salehi — a member of the nuclear-negotiating team and a loud voice in support of the JCPOA — to personally show up to sign the symbolic document.

Getting further attention were the recurrent scenes of Iranian youths taking collective selfies and immediately posting them online as an indication that they take full pride in celebrating the revolution's birthday. Meanwhile, some used the occasion to vent their anger at harsh economic conditions as well as rampant corruption and nepotism. Another group insisted that their presence was no proof they were happy with the overall performance of government officials. "Don’t get overexcited, you authorities," one placard read. "We are here to show support for the supreme leader."