The Palestinian Ministry of Foreign Affairs and Expatriates denounced the Israeli government’s approval to build a cable car connecting the Old City of Jerusalem, saying that Israel seeks to Judaize the city. 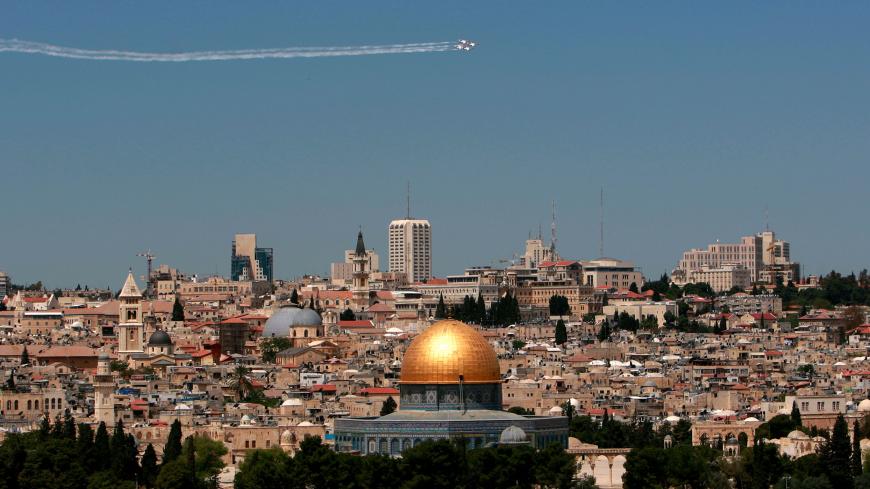 Israeli air force jets fly in formation over the Dome of the Rock in Jerusalem's Old City, April 27, 2009. - REUTERS/Ammar Awad

GAZA CITY, Gaza Strip — The Palestinian Ministry of Tourism and Antiquities decried Feb. 8 the Israeli government's approval to establish a cable car in the Old City of Jerusalem. The ministry considers this plan to be a settlement and Judaization project that seeks to establish Israel’s sovereignty over Jerusalem entirely, and alter the city’s scenery and Arab landscape. It noted that “the creation of a modernist element in the sky over Jerusalem will greatly damage the city’s international value and authenticity, as it does not go in line with its cultural nature and ancient religious and cultural aspect.”

In addition, it indicated that the project “passes near the walls of Jerusalem in Silwan, al-Tur and the Lions' Gate neighborhoods,” involves building stations in the Old City and “connects the various settlement and Judaization projects in East Jerusalem.”

On Jan. 30, the Palestinian Ministry of Foreign Affairs and Expatriates denounced the project, saying that Israel is doing whatever it takes to Judaize East Jerusalem and alter its legal and historical status quo. The cable car would run through more than 80% of East Jerusalem.

It underlined that the project is a violation of international law and challenges UNESCO cultural heritage resolutions. The Ministry of Foreign Affairs demands that UNESCO gets involved to halt the execution of this settlement project.

Israel's National Infrastructure Committee approved Jan. 29 a plan to build a 1.4-kilometer-long (roughly 1 mile) cable car project connecting Mount of Olives in West Jerusalem to Al-Buraq Plaza in East Jerusalem, and specified a 60-day period for the public and institutions to object. The project that seeks to ensure the transportation of 3,000 passengers per hour in rush hour was assigned nearly $55 million in budget allocations.

Haaretz reported Jan. 29 that the scheme was put forward as a solution to the traffic congestion around the Old City, especially in the area of Al-Buraq Plaza. Some Israeli parties, particularly those questioning its economic profitability, are against the project that will cause damage to the landscape of the Old City. Israeli nongovernmental organization Emek Shaveh, which works to defend cultural heritage sites, criticized the scheme in a tweet on Sep. 15, 2018, following its submission to the committee for approval: “Jerusalem is not Disneyland and its treasures of landscape and its heritage are not negotiable currency.”

Speaking to Al-Monitor, Saleh Tawafsha, general director of the Ministry of Tourism's Department of Antiquities Protection, condemned the Israeli government’s approval of the scheme and indicated that it seeks to achieve political, not tourism goals, as Israel claims. He explained that the cable car would obliterate the city’s archaeological and historical landmarks, and emphasized that Israel has been seeking to Judaize Jerusalem since its occupation in 1967 and to alter its Arab and historical character.

He said that the Old City of Jerusalem and its walls was added to the UNESCO List of World Heritage in Danger in 1982 and that no projects that would impact the city’s scenery ought to be implemented. He underlined that Israel has been making yearslong efforts for the project to be approved. He noted that in its May 2015 resolution, UNESCO condemned Israel’s preliminary consent to build a cable car in East Jerusalem, and stated in its May 2017 resolution that Israel is an occupying power of the city of Jerusalem. Tawafsha said that any measures or schemes deemed to alter the city’s status quo are groundless.

“Under the international conventions, the occupying states are prohibited from taking actions that would alter the character of the occupied state. This project will obliterate and scar the landscape of the historical and ancient city,” he added.

He explained that the ministry will not submit an objection to the Israeli government, because it does not recognize its right to implement projects in Jerusalem, considering it to be an occupying state. He added that they would resort to international institutions instead, and demanded that these institutions, spearheaded by UNESCO, take urgent steps to halt the scheme before Israel embarks on its execution.

“We are making the arrangements for a wide media campaign opposing the project. We will spare no efforts to safeguard our civilization and heritage in Jerusalem,” he noted.

The coordinator of the world heritage dossier at the Palestinian Ministry of Tourism and Antiquities, Ahmad al-Rajoub, told Al-Monitor that the cable car will be gliding over Palestinian buildings, which means that some will have to be demolished, and more Palestinian lands will be seized, as the project necessitates the construction of 15 concrete pillars of 26 meters (85 feet) high. in addition, pollution and disturbances caused to Palestinian families, thus violating their privacy, are a result of this project.

He noted that the project will have major consequences on the aesthetic, historical, economic, social and political levels, and will disfigure the cultural landscape and view of an ancient civilization, which would set a dangerous precedent, as no cable car glides over a historical city anywhere in the world. He added that buildings could be damaged due to the vibrations of the cable car.

Rajoub perceived the project to be an Israeli attempt to give tourists the impression that Jerusalem is a Jewish city, as it does not encourage tourists to walk through the Arab neighborhoods, which will have an impact on the Palestinian economy.

Rajoub said, “The project seeks to change the route of tourists, particularly in Jerusalem, diverting them toward Israel and bypassing the Arab neighborhoods, which will affect tourism in Arab Jerusalem.”

Hassan Khater, chairman of the International Jerusalem Center, told Al-Monitor that the cable car project aims to increase the settlement activity in Jerusalem, by linking West Jerusalem to East Jerusalem and its ancient sites. He indicated that the transportation of settlers by cable car would strengthen the Jewish presence in Jerusalem, as it will ward off any contact with Jerusalemites and harassments as they enter the Arab neighborhoods. He added that most tourists who come to Jerusalem are well-aware that Israel is an occupying state.

“The cable car project could cause a geographical imbalance, particularly since only Israelis and tourists can use it,” he said.

Khater stressed the need for UNESCO to take a firm stance against tampering with the identity of Jerusalem and its cultural and religious components, and demanded that the Palestinian government object before Israeli and international bodies. He emphasized that a mere condemnation of the project is a weak reaction that will not produce any real changes on the ground, and pointed out that there ought to be plans and budgets to promote the steadfastness of the Jerusalemites and to start an international movement involving all stakeholders in Jerusalem.

Mamoun Abu Amer, an expert in Israeli affairs and lecturer at Ummah Open University in the Gaza Strip, told Al-Monitor that the cable car will cause disastrous repercussions on the Arab community in East Jerusalem. He said that the Israeli approval of the projects amounts to control over the city’s Arab neighborhoods, noting that the project would affect the city’s economic and tourism sectors. He argued that Israel's Likud-led government seeks to earn additional points prior to the general elections in April.

“The cable car project will result in Israel controlling large parts of the Old City under the pretext of ensuring the safety of the settlers. It could impose also further security measures on Jerusalemites,” he said. 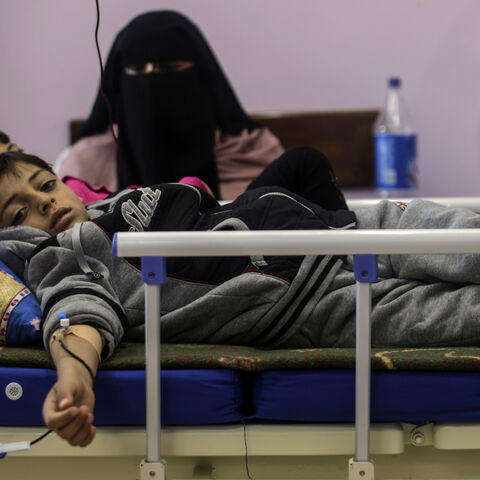 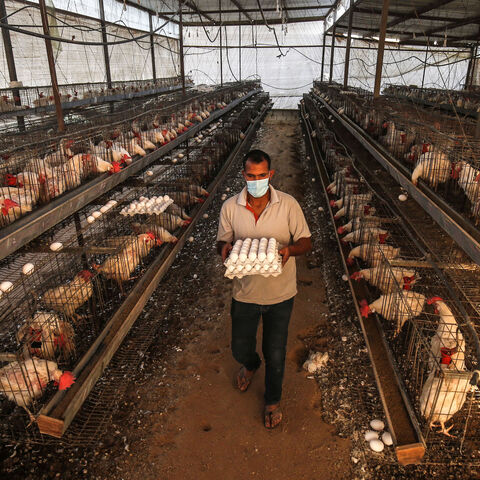 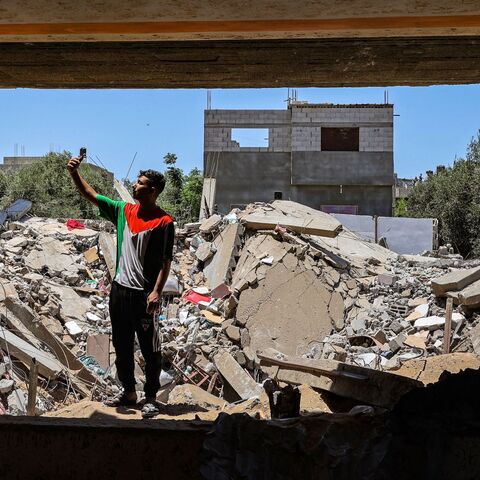