Is Russia warming up to the Houthis?

Russia has recently raised its profile in the conflict in Yemen both by endorsing UN-led peace efforts and by re-engaging with the Houthis, with whom Moscow has a long and twisted relationship. 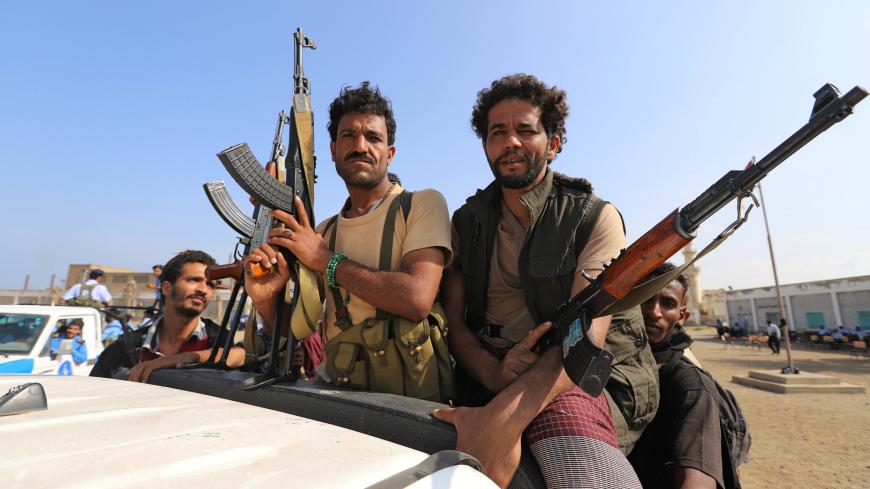 Houthi militants ride on the back of a truck as they withdraw, as part of a UN-sponsored peace agreement signed in Sweden earlier this month, from the Red Sea city of Hodeidah, Yemen Dec. 29, 2018. - REUTERS/Abduljabbar Zeyad

On Jan. 9, Russia’s ambassador to the UN, Vasily Nebenzia, praised UN efforts to end hostilities in Yemen and pledged Moscow’s support for peace negotiations that engage all warring parties in the conflict. While Nebenzia remained circumspect about the prospects for a swift breakthrough in the UN peace negotiations, his conciliatory attitude toward the talks reflected Russia’s support for dialogue between the Saudi-led coalition and Houthi rebel forces.

Russia’s support for engaging Houthi rebels in multilateral diplomacy has been a consistent hallmark of its Yemen policy since the war’s inception in March 2015. In April 2015, Russia was the only nation on the UN Security Council to abstain from Resolution 2216, which called for an arms embargo against the Houthis and imposed a travel ban on the movement’s leader, Abdulmalik al-Houthi. While Russia ultimately removed its diplomatic personnel from Sanaa in December 2017 to demonstrate opposition to Houthi involvement in former President Ali Abdullah Saleh’s assassination, Moscow has continued to oppose the Saudi-led coalition’s campaign to militarily vanquish the Houthis.

Although Russia is typically circumspect about political factions that seize power through extralegal means, Moscow believes that diplomatic engagement with the Houthis is possible because of their history of political compromise. Mareb al-Ward, a prominent Yemeni journalist, told Al-Monitor that the 2009 truce with Saudi Arabia and temporary cease-fires in 2016 were proof that the Houthis could engage in effective dialogue given the right incentives. While hard-liners who surround Houthi control the movement’s military activities, Ward noted that other senior leadership figures such as Mohammed Abdulsalam have engaged in direct dialogue with Saudi Arabia.

These informal divisions within the Houthi movement have convinced Russia to emulate the strategy it implemented in Afghanistan, where Moscow has sought to engage with “moderate” Taliban members who are interested in a political settlement. On Oct. 26, Russian Deputy Foreign Minister Mikhail Bogdanov met with a delegation of Houthis led by Mohammed Abdulsalam to discuss a potential peace settlement in Yemen. The reaction from the Houthi delegation was positive. Shortly after meeting with Bogdanov, Abdul Malik Arji, a member of the Houthi political bureau, spoke to Russian state media outlet Sputnik and stated his support for Russia becoming a venue for intra-Yemeni peace talks.

The conciliatory response of the Houthi delegation in Moscow to comprehensive peace negotiations was intriguing, as it occurred just weeks after Houthi rebels refused to attend the aborted Geneva peace talks. While the intensification of Saudi airstrikes in Hodeidah undoubtedly influenced this change in perspective, the Houthi delegation’s receptiveness to Russian diplomatic pressure reflects the organization’s long-held aspirations of gaining Russian support. The Houthi movement’s courtship of Russia began in February 2015, when Houthi diplomats asked Russia to accept the legitimacy of their rule over Yemen in exchange for deals in Yemen’s energy sector.

Although these commercial deals did not come to fruition, the Houthis intensified their diplomatic outreach to Russia again in August 2016, when the Russian charge d’affaires in Sanaa, Oleg Dremov, praised the creation of a Supreme Political Council coalition between Saleh and the Houthis. This statement was swiftly clarified by Russian officials, who expressed support for Yemen’s UN-backed government. Despite this backtrack, Saleh’s description of Russia as the “closest kin” to the Houthis revealed the goodwill toward Russia that lingered in Sanaa.

Even though Russian Foreign Minister Sergey Lavrov described the Houthis as a “radicalized movement” after Saleh’s death, Houthi engagement with Moscow on a resolution to the Yemen conflict might have finally produced a tangible breakthrough in the second half of 2018. In July, the head of Yemen’s Supreme Political Council, Mahdi al-Mashat, urged Russia to intervene on behalf of the Houthis in Hodeidah, and wrote a letter to Russian President Vladimir Putin. The letter claimed the Saudi-led coalition’s military activities in Hodeidah violated international law, the UN Charter and Yemen’s sovereignty.

Although Mashat’s letter to Putin did not result in a Russian military intervention in Yemen, Abdulsalam Mohammed, the director of the Abaad Center for Studies, told Al-Monitor that Russia subsequently exerted pressure on the Houthis to engage in multilateral peace talks and to desist from capturing and torturing political prisoners. According to Mohammed, the initial delay in Russia’s outreach to the Houthis after Mashat’s letter was merely the product of Moscow’s desire to avoid tensions with Saudi Arabia, at a time when it sought to secure lucrative commercial deals with the kingdom.

While the exact role of Russia in encouraging the Houthis to come to the table in Stockholm is unclear, Moscow’s outreach toward the Houthis is viewed favorably, even by political factions that are stridently critical of Houthi military activities. When queried about Russia’s balancing strategy in Yemen, the Yemeni ambassador to Russia, Ahmed Salem al-Wahishi, insisted to me that Moscow’s ultimate allegiance is to Yemen’s UN-recognized government, as both countries understand the costs and dangers of terrorism.

Ali Zamaki, a Moscow-based representative of the Yemeni secessionist Southern Transitional Council, told Al-Monitor that Russia possessed no special relationship with the Houthis and that Moscow’s dialogue with them is aimed at facilitating a political settlement in Yemen. Zamaki also expressed support for Russia’s decision to veto a UN resolution in February 2018 condemning Iran for its alleged supply of ballistic missiles to the Houthis. He said Moscow correctly viewed these “false allegations” as a form of “psychological warfare” used by external powers to advance their political objectives.

Although Russia refuses to recognize the legitimacy of the Houthi seizure of Sanaa in 2014, Russia has engaged with the Houthis more actively than any other great power because of its belief in the necessity of a political solution to the Yemen conflict. This pattern of dialogue has made the Houthis receptive to Russia’s demands and given Moscow a more prominent role in ending the Yemeni civil war. As tensions between the Houthis and the Saudi-led coalition have intensified due to mutual allegations of cease-fire violations, Russia’s diplomatic outreach strategy toward the Houthis could be put to the test again in the months to come.