The Pentagon has agreed to acquire Israel’s Iron Dome to intercept cruise missiles, but experts are questioning whether the system can effectively defend US troops. 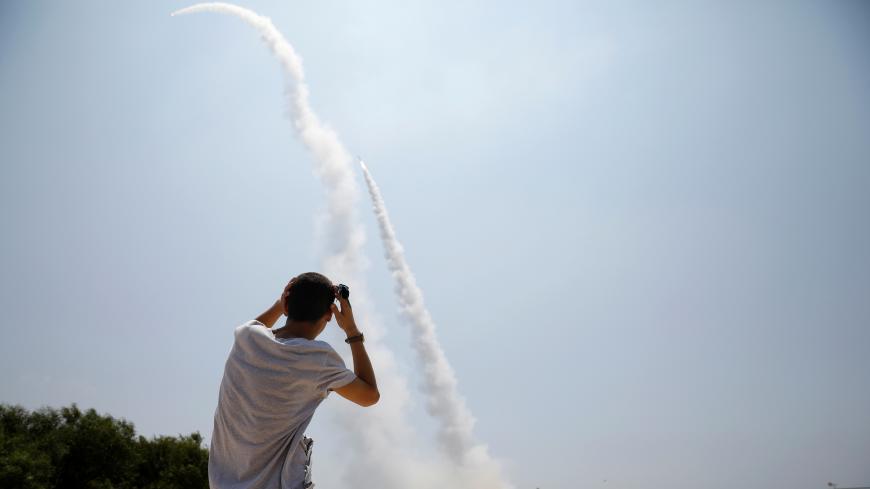 An Israeli man looks on as an Iron Dome launcher fires an interceptor rocket in the southern Israeli city of Ashkelon, July 14, 2018 - REUTERS/Amir Cohen

The Pentagon’s decision to acquire Israel’s US-funded Iron Dome system to defend American troops is raising questions from military experts about whether the missile defense batteries can handle emerging threats from Russia and China.

Inside Defense first reported the Army’s decision to acquire Iron Dome earlier this month. The move comes after Congress, which has long praised the system’s decadelong record of fending off rockets and mortar attacks, called on the Pentagon to take steps to obtain defenses to stop increasingly capable cruise missiles from Russia and China that could threaten US forces deployed overseas.

In a statement, defense contractor Raytheon said it was ready to support the Army’s purchase of Iron Dome.

“Raytheon is ready to support the Army, as it realizes the full operational capabilities of Iron Dome in a US operational environment,” Chris King, the company’s director of Israeli programs, told Al-Monitor in a statement. “We’re here to put our extensive expertise to work and support the Army’s needs for integration.”

The Pentagon now has a September 2020 deadline to field and deploy two Iron Dome batteries as an interim cruise missile defense, according to requirements in the US defense authorization bill signed by President Donald Trump in August.

Army Assistant Secretary Bruce Jette told Al-Monitor the service was considering integrating Iron Dome into the US missile defense arsenal, but Army officials did not respond to further requests for comment on the program. In December, Pentagon leadership told lawmakers it would need a stopgap capability to shoot down cruise missiles fired at US troops.

“As outlined in the 2018 National Defense Strategy, we must develop layered regional missile defenses to deter aggression by near-peer adversaries,” Undersecretary of Defense for Policy John Rood, the Pentagon’s No. 3 official, wrote to Congress in December. “The Army should field an interim capability to meet this need.”

The potential for an American purchase of Iron Dome gained momentum in the last Congress when House lawmakers wrote a provision in annual defense legislation calling for the Pentagon to spend $30 million to field and test system components. Raytheon’s King told Al-Monitor that the company manufactures more than two-thirds of the parts for Iron Dome’s Tamir interceptor missile across 26 states in the United States.

The top Republican on the House Armed Services Committee, Rep. Mac Thornberry of Texas, first called on the Army to test Iron Dome’s capability for protecting US troops in a draft of the defense law last year. He said the Israeli-manned system served as an example of a battle-ready missile defense system.

“We have real needs and we did not tell them to use Iron Dome,” Thornberry said. “We just said, 'Looks like it’s working pretty well to us, you all go investigate this as a part of meeting the Army’s needs.' And so I think that’s a reasonable, useful way to approach this.”

Raytheon’s King told Al-Monitor that Iron Dome is uniquely flexible in its ability to handle air raids and missile attacks, reportedly intercepting 1,700 projectiles with a 90% success rate since it was first deployed in 2011.

But the short-range Iron Dome system has worked mostly against rockets, artillery and mortar shells fired by Hezbollah and Hamas. As US adversaries such as Russia and China re-stock supplies of high-tech cruise missiles, experts are not convinced it’s an adequate stopgap until the United States can field a long-term cruise missile defense.

Iron Dome’s Tamir interceptor “was not originally designed for cruise missile defense,” said Rick Berger, a research fellow at the American Enterprise Institute and a former Senate staffer. “The short-term nature of this buy can’t be emphasized enough, and the Army may change horses again for the next two batteries.”

The decision to field Iron Dome comes as the US and Israeli defense industries are growing more intertwined. On Tuesday, the US Missile Defense Agency announced that the Pentagon and the Israeli air force successfully tested the Arrow-3 weapons system in central Israel, which the Pentagon called “a major milestone.”

The United States and Israel inked a fresh memorandum of understanding in 2016 that includes $500 million in US missile defense aid each year. And the Pentagon’s new Missile Defense Review calls on the Defense Department to “take advantage of Israeli research and development efforts for similar US defense missions.”

Acquiring Iron Dome may also give the United States access to its sought-after software. But when it comes to dealing with more advanced threats that could impact US troops, such as the scud missiles fired into Yemen by the Houthi rebels, it’s not clear the system will prove effective.

“Iron Dome’s interceptors do not have the reach or speed to engage successfully a scud warhead, or any other missile with a range greater than 50 kilometers [30 miles],” said Michael Elleman, a senior fellow for missile defense at the International Institute for Strategic Studies.