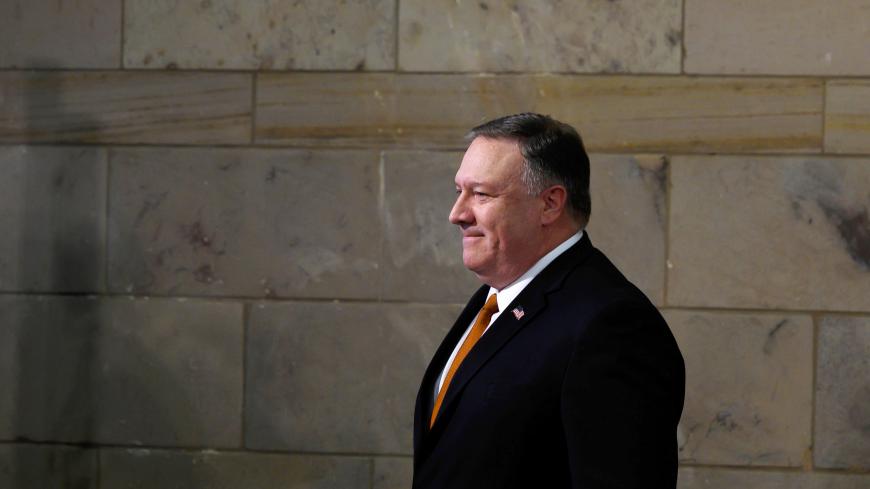 US Secretary of State Mike Pompeo looks on after speaking to students at the American University in Cairo, Egypt, Jan. 10, 2019. - Andrew Caballero-Reynolds/Pool via REUTERS

United States Secretary of State Mike Pompeo delivered his much-anticipated Cairo speech on Jan. 10. The speech, delivered at the American University of Cairo, was supposed to be a rebuke of President Barack Obama’s policies and an overall of condemnation of Iran.

Pompeo mentioned Iran 27 times during his speech — far more than any other country ever has. He referred to Iran as “our common enemy,” criticized the previous administration for not supporting the 2009 Iranian post-election protests, and talked about US efforts to sanction Iran and roll back its regional influence, saying that the United States will work with partners to “expel every last Iranian boot” from Syria.

The speech, however, failed to set a new tone or even reset the narrative Obama had presented in Cairo in 2009. Former Obama adviser Ben Rhodes tweeted, “Mike Pompeo attacked a speech that Barack Obama gave 10 years ago by giving a speech that no one will remember next week.” Former US diplomats also panned the speech, with one former official saying of their focus on Obama’s Cairo speech, “Get over it.” Iranian Foreign Minister Mohammad Javad Zarif echoed a similar sentiment, tweeting, “Best for the US to get over the loss of Iran,” referencing US influence in Iran before the 1979 Islamic Revolution.

Iran’s Foreign Ministry spokesman Bahram Ghassemi was the first Iranian official to speak in reaction to Pompeo’s speech. “America — in particular its current extremist regime — due to its ancient animosity against the Iranian nation and its opposition to all of the actions of the administrations before them, and taking advantage of notorious and failed politicians and being deceived by certain movements and lobbies, has taken a path in which there is no imaginable benefit for America,” Ghassemi said Jan. 10.

Of President Donald Trump’s decision to exit the Joint Comprehensive Plan of Action and his administration’s inability to force Iran to renegotiate it, Ghassemi said, “This regime left a comprehensive and legal agreement that was the outcome of negotiations, and now that it can’t find a replacement for it they are inflicted with chronic despair and anger.” He continued, “This is a big contradiction in which America, on one hand, has taken its animosity toward Iran toward its peak, and on the other hand, it hypocritically says it is in favor of dialogue. Mr. Pompeo once again stated directly that America is an enemy of Iran and this enmity is nothing but the enmity of the people. He should know and correctly understand that in the face of enmity against Iran and Iranians, we will defend ourselves with all of our ability.”

Ghassemi added, “America has shown with its behavior that it is pursuing schisms and creating new chaos in the region.”

The speech failed to make headlines in Iranian media for the most part. Although newspapers are off on Fridays in Iran, the news agencies cover commentary and up-to-date news, with social media being an outlet for well-known analysts as well. Most Persian language social media was more focused on the debate over the two-year anniversary of the death of Ayatollah Akbar Hashemi Rafsanjani and the news that the popular coach of Iran’s national soccer team, Carlos Queiroz, will be stepping down.